This past weekend was lovely, if it also went by too quickly, because we were able to cook at our own speed and please only ourselves. While I’m grateful for everything we’ve been able to do and thankful for everyone who came ’round last weekend to celebrate Michael, I was sorely in need of a return to a more normal weekend schedule. The kind where we wake up, I read for a bit, and then Michael eventually gets up and makes us bacon and eggs and we figure out what we’re going to do for the rest of the day. If there’s a plan to head around the harbor to Fells Point or Harbor East I’ll get my workout in before we go, and then we while away the rest of the afternoon over long walks, a couple of beers, and either some bar food or barbecue (and occasionally an oyster or six). We’ll grab provisions for dinner at the Whole Foods nearby before making the walk back over to Fed Hill, and then we’ll shower and make dinner and chill out for the rest of the day. 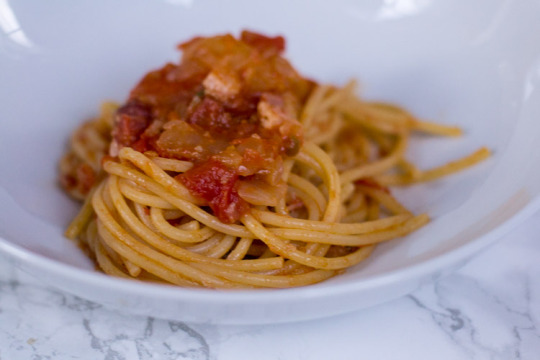 Sunday, I spent the morning reading the entirety of The Girl on the Train from cover to cover, and it felt so damn indulgent and wonderful. The book itself was pretty good–super melodramatic, and in the moment I was completely drawn in but in explaining the twists to Michael realized how silly and over-the-top it was. I’m looking forward to seeing the film adaptation as the cast looks solid and I love that they switched the setting from London to New York just to see the Oyster Bar in GCT alone.

But on a more serious note–by now you’ve probably heard about the horrible 6.4 magnitude earthquake that hit central Italy last week and the destruction it has left in its wake. Very near the center of the devastation was the little town of Amatrice, which is just outside of Rome and home to the iconic pasta dish that bears the town’s name: pasta all’amatriciana. In a cruel twist of coincidence, this past weekend was supposed to be the 50th annual sagra (a.k.a local festival) in which the town would be celebrating this iconic dish, which has prompted both restauranteurs and fellow food bloggers and writers to encourage everyone to either buy a plate of pasta (with proceeds going to the Italian Red Cross) or make a pot of your own and donate what you can to the cause, essentially throwing a #virtualsagra.

Here’s what we made on Sunday, and I decided to return to an old friend I hadn’t referenced in a while to get my recipe: The Silver Spoon. Depending on who you talk to, this isn’t the most “authentic” recipe because there are fresh tomatoes instead of canned, fresh chile instead of dried, and black pepper used to season the sauce…but it’s pretty good, all the same. Remember that we’re only in the beginning of good tomato season still, so if any time is the right time to go rogue, now would be ideal.

The main deviations I made from The Silver Spoon’s recipe is using big, heirloom beefsteaks (they looked SO much better than the Romas down the shelf) and not seeding them; given that this made for a juicier sauce initially, I let the pot simmer uncovered and only covered it up when I was concerned that the sauce would evaporate too much. I also upped the quantity of the pasta and tomatoes slightly, because who has time and/or inclination to measure out 12 ounces of pasta?

Needless to say, if you’re craving pasta and want to do something good while you enjoy it, consider partaking in this now-global festival and help raise money for relief efforts at the same time. A really good round-up of ways to contribute can be found here. I used the link for the Italian Red Cross for outside Italy and it took all of five minutes to complete, so they do make it really easy to help. 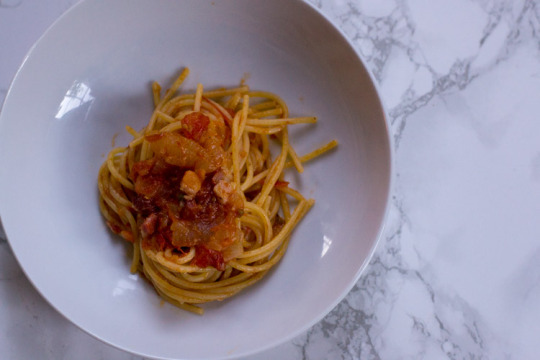 Adapted from The Silver Spoon

Drizzle a little olive oil into your sauce pot and add the pancetta; let them cook until the fat renders out, about 5 to 10 minutes. Add the onions and let them cook, stirring often, until they get a slight brown color in 10 to 15 minutes. Add the tomatoes and chile, season with salt and pepper, and simmer for about 40 minutes. (Note: if you’re able to seed your tomatoes, then cover the pot; if not, keep the lid off to let some of the excess liquid evaporate.)

Place another large pot of water on boil, add a tablespoon or two of salt and cook the spaghetti to a few minutes under package directions. Drain, add to the sauce pot, and toss well to let the pasta finish in the sauce before serving immediately with grated cheese.