The first time we went to New Orleans I wasn’t expecting to encounter so many oyster houses when we were there. I don’t know why I didn’t think to anticipate this, but as our cab drove us to the Hotel Monteleone and we passed by a few I knew that our first meal would be oyster-centric, if not completely oyster-based. Between that trip and our subsequent trip last October to NOLA we’ve covered some good territory on the oyster front, so I wanted to share some of our experiences on where to score excellent mollusks. 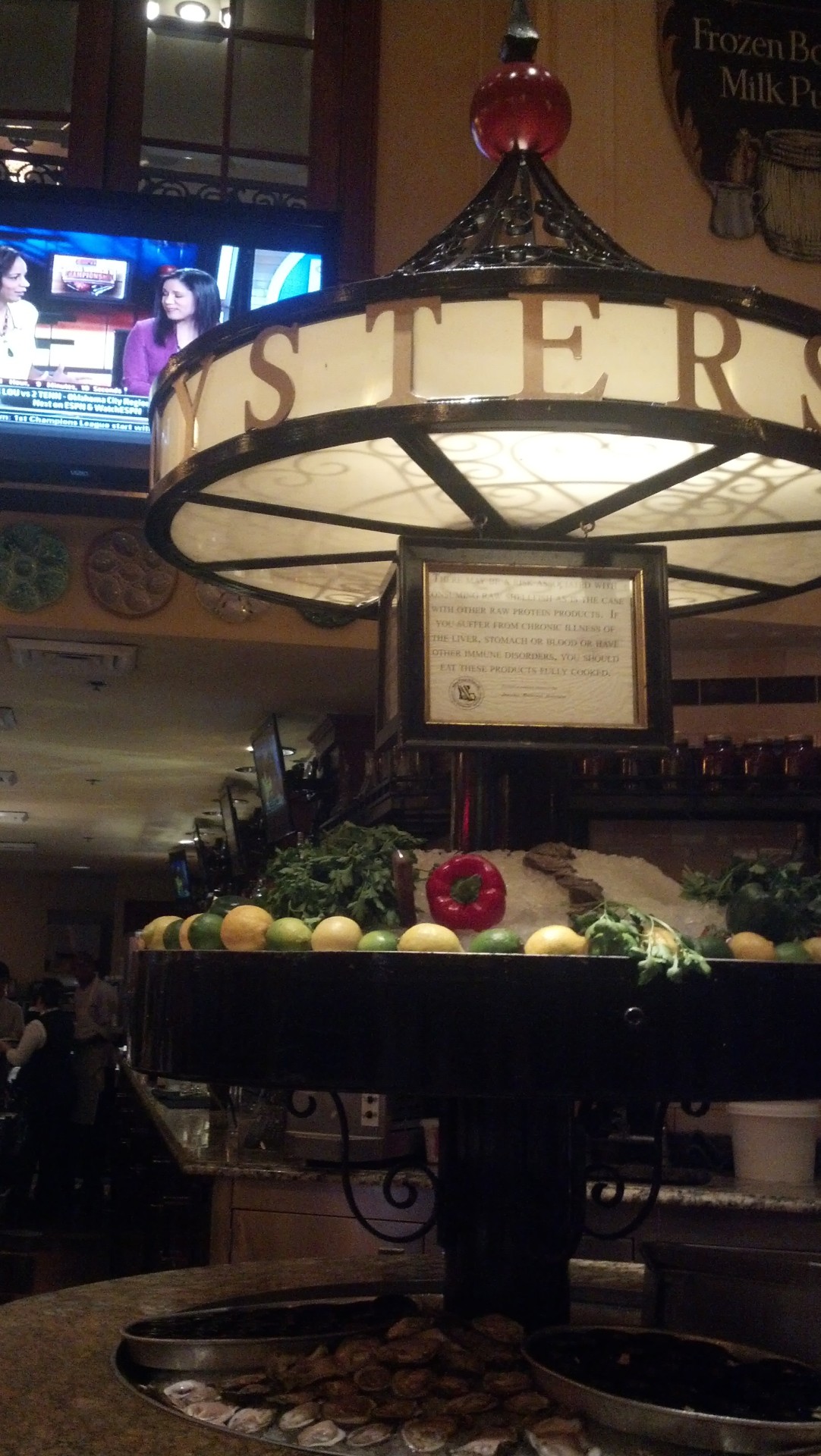 Bourbon House: This, along with Royal House, are the two places the concierges at the Hotel Monteleone are going to recommend if you ask them for a suggestion. On our first night ever in the city we went to Bourbon House, and I loved the old-school atmosphere and seemingly over-the-top decor. After spending much of the day traveling sitting down at the bar and enjoying a nice cocktail and a big plate of seafood sounded like an excellent idea, and it was here I first encountered the Gulf oyster. Much bigger than most oysters (with the largest referred to as “cow tongues”), I loved them. They aren’t quite as delicate as, say, some oysters from the Chesepeake or the Pacific Northwest, but I dug how meaty and substantial they were.

Felix’s: We only ever made it here once and only then because we were considering checking out Acme Oysters across the street. We had a great time here on our one visit between the well-made Sazeracs, the very fast service with each dozen oysters we ordered, and the fun conversation with the staff about the upcoming season of Game of Thrones, but when we came back we were urged to not go there (and definitely not Acme) and no one ever told us why we should. I’d like to give them another shot so long as there was no wait to go in, but at the same time, if there are better oysters to be had, perhaps it’s better to leave this place in the past.

Royal House: After not going here on our first night and getting yet again another recommendation to go here from the Hotel Monteleone concierge, we finally came here last year. It didn’t disappoint–both the fresh and fried oysters were delicious, and the atmosphere here was a little more subdued and quiet compared to other places in the Quarter. Michael was all dapper here and was very pleased with this photo of us that I took in the mirror: 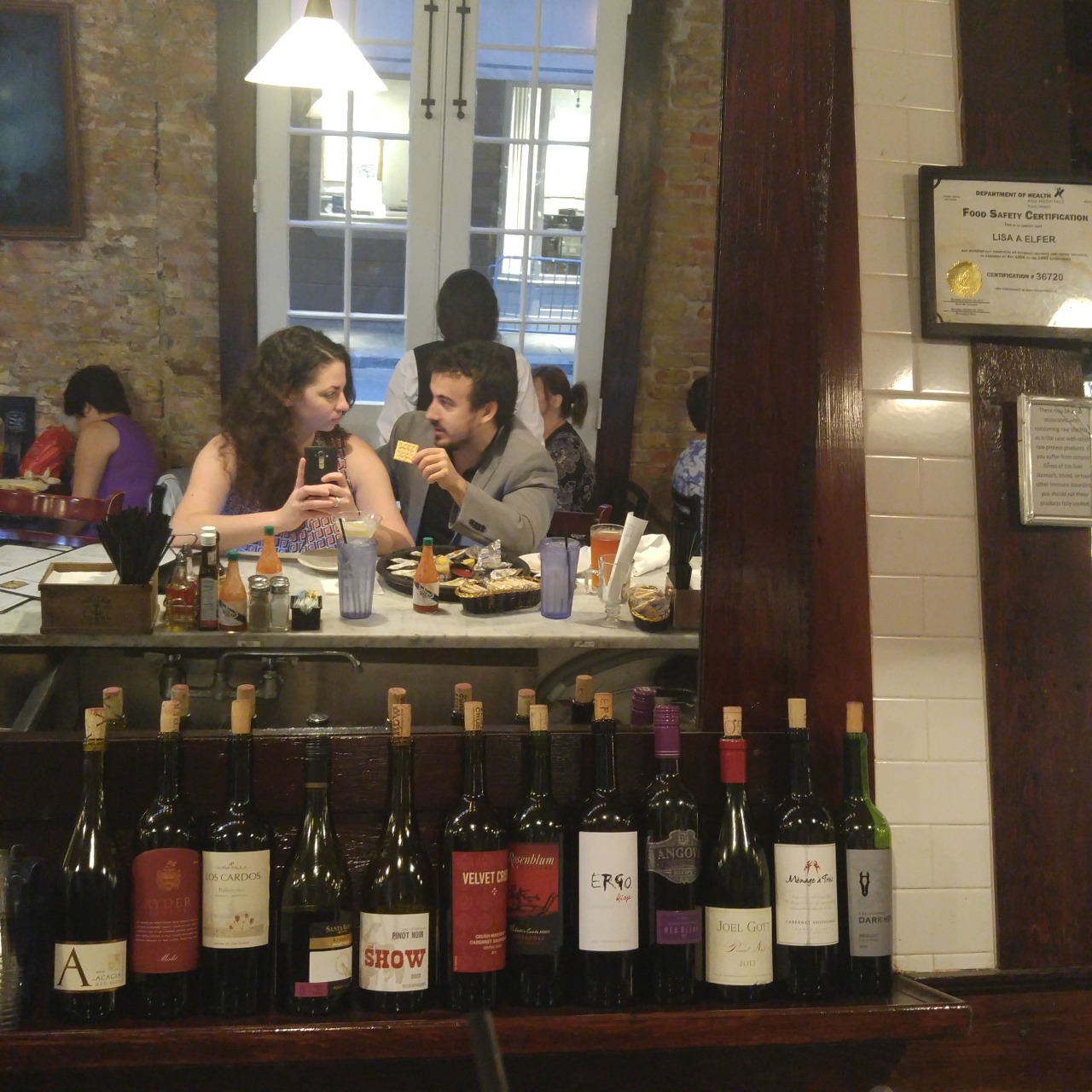 All told, this place was definitely worth checking out. The Monteleone concierge may live to recommend for another day!

Casamento’s: My bucket list of places to visit last year when we came wasn’t long, but it did involve one place that was a bit of a haul and that was Casamento’s. It’s widely hailed as one of THE places to get oysters in the city, but the only downside that it’s a bit of a trek to get there if you’re staying downtown or in the Quarter. We Ubered out there to arrive close to when it opened, but as Michael looked around as we were driving there he decided that he really wanted to make the three-mile walk back. Clearly, this meant that we had to have at least two dozen oysters and a couple of beers to fuel ourselves for the trip, and we did just that while being surrounded by gorgeous tiles everywhere and a low-key feel that was utterly delightful. It’s almost like eating oysters in your grandmother’s kitchen, and that’s not a bad thing at all.

Last year we stayed closer to the river as we didn’t want to spend the money on a very expensive hotel room, and so we were basically next door to the one casino in the city. We asked their concierge where to go to get oysters, and he emphatically encouraged us to go to Drago’s, which was right by the water in the nearby Hilton. This isn’t the original location, which is in Metarie, but it’s a much more convenient option for those of us wanting to get their famous char-grilled oysters without having to get a car to do so. The interior is very much what you would expect of a hotel bar and completely unforgettable, but honestly it doesn’t matter once a platter of piping hot oysters come your way. Served with lots of French bread, the beauties are covered with an herbed butter and lots of cheese, and they are ridiculously tasty (if also pretty heavy from all of that butter). When I researched the recipe the only one I found was for six dozen oysters which called for two POUNDS of butter. No wonder we could only finish two dozen in that sitting between the two of us!

A few weeks ago I was in the mood to try my hand at making them, and once I scaled down the recipe I managed to make a decent approximation. The only thing we lacked was a grill, so instead I broiled these and while not fully authentic, these were definitely enough to take me back to that nondescript hotel bar yet again. Instead of simply using lots of butter, I opted for some European-style butter to add to the richness, and what it lacks in quantity of the original recipe it makes up for with intense butter flavor. 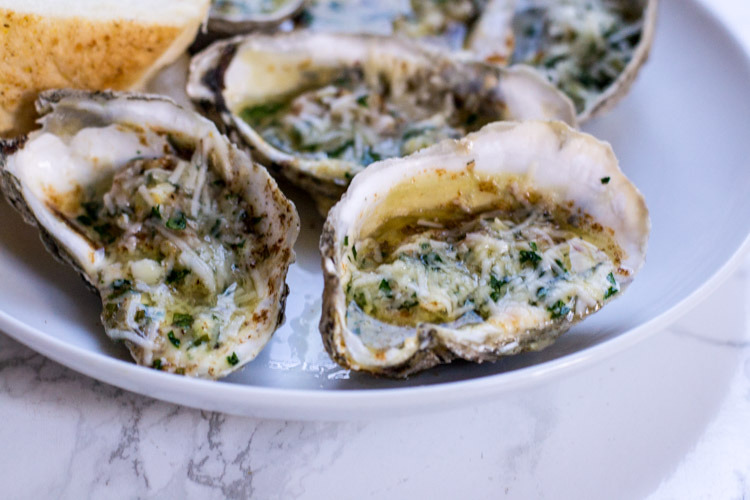 Char-broiled Oysters (with all apologies to Drago’s)

Mix the butter with the garlic, pepper, and herbs and salt to taste; any leftover butter can be saved as a good compound butter if you have any leftover (but you probably won’t).

Place an oven rack on the shelf that is closest to the broiler, and turn the broiler on to high. Arrange the oysters on a baking sheet and use a cooling rack to help keep them in place. Spoon about a teaspoon-ish of butter on each oyster, and then add a little bit of cheese on top of the butter. Place in the oven and cook until the butter and cheese are a little brown and sizzling and the oysters are cooked through, remove from broiler, and serve immediately.