It should come as no surprise that I was determined to embrace Basque cooking even before we had left San Sebastian; I found one of the few open-on-Sunday bookstores and purchased myself a copy of Los Mejores Pintxos de Donostia along with another book devoted to tartines that was too visually appealing to pass up, and the first weekend we were back I already flagged some recipes that I had to make right away. I then promptly added The Basque Book by New York-based Alex Raij to my birthday wishlist, because I had to double down on this, naturally.

One of the first pintxos we had on our Parte Vieja (aka Old Town) txiquiteo[1] on Saturday night was a really simple and absolutely wonderful skewer of shrimp, bacon, and what I suspect was allioli drizzled over top when we stepped into Beti Jai Berria. Days later, while reviewing my notes and making a list of dishes to recreate on the flight back to Jersey, this dish rocketed right to the top of my list because not only was it tasty, I knew it would be one of the easier ones to replicate without having to special-order any ingredients.

I mean, the pairing of bacon and shrimp is not exactly a revolutionary one—I’ve written about it here in celebrating the fourth season premiere of Parks and Recreation and Ron Swanson’s love of the dish—but this was the first time I ever tried cooking the combination on skewers, so I was curious as to how they would turn out. Seasoning them well with salt and pepper was important, and making a great alliioli was also an imperative—I went with José Andrés’s modern version of the classic recipe, which worked out perfectly after it had some time to emulsify and chill in the fridge. (After a few less-than-ideal recent batches, I was pleasantly surprised by how well this came together.)

This is an incredibly easy dish to make, and one that’s scalable for a crowd—if you go the Basque way, you don’t bother deveining the shrimp, and you thread them on the skewer with some thin-ish slices of pancetta, they are assembled in a few minutes. In fact, I would tell you to make the allioli first so it has time to chill, and then pan-fry the skewers on the stove and serve them immediately thereafter.

What’s even better is that you can just as easily make some for yourself for a really simple dinner to have with a salad, which I did recently when Michael was on an overnight trip to Norfolk, VA. You are left with allioli to use up elsewhere, but that’s not the worst problem to have.

More to come on this topic of pintxos, because we had a lot of them over the course of those two days. 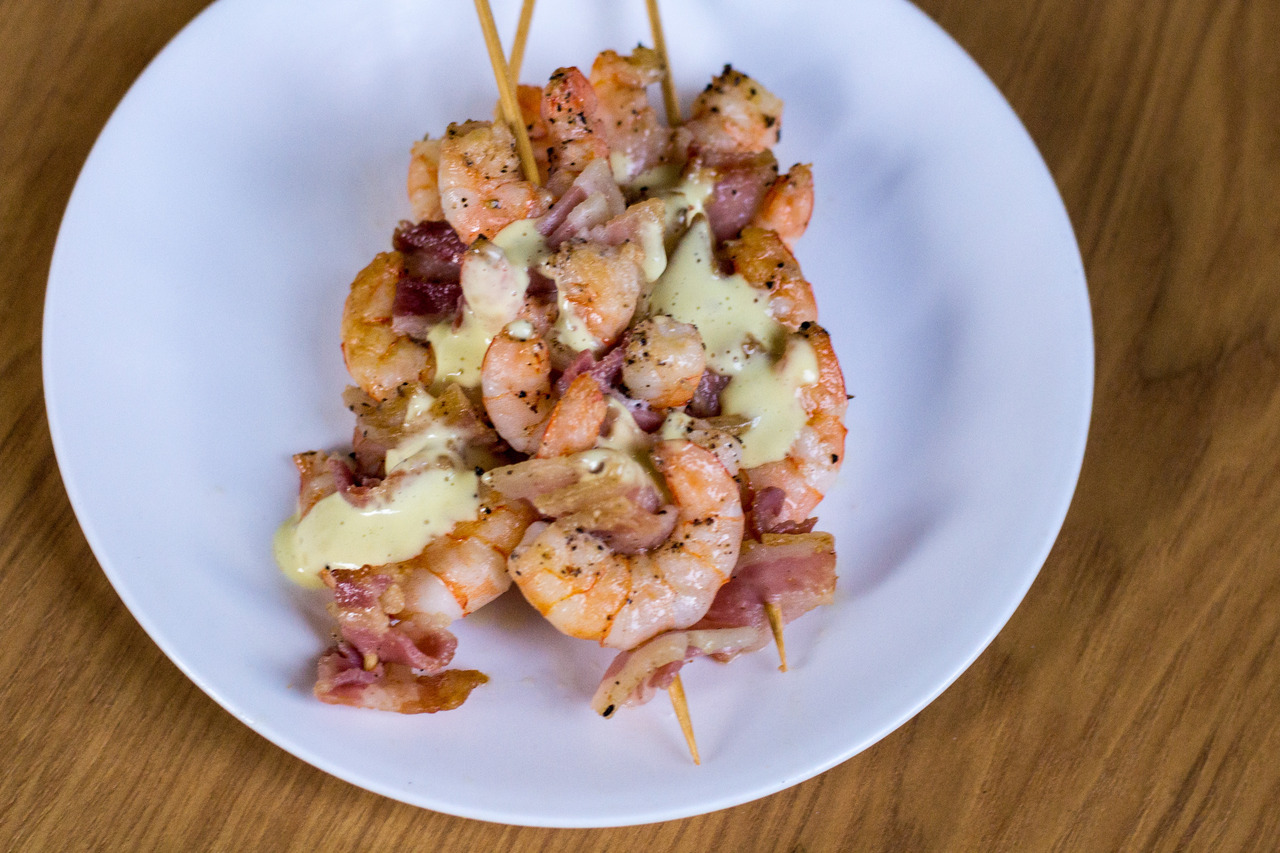 Serves 2-3 as part of a pintxo spread; can be scaled up or down

Make the allioli below, and then while that chills, start assembling the skewers.

Using bamboo or metal skewers, alternate threading shrimp and bacon onto each skewer, placing about 3-4 shrimp to each one. Season the skewers well with salt and pepper, and set aside. When the allioli is at desired consistency, heat the olive oil in a large skillet on medium-high heat and when hot, add the shrimp skewers, working in batches if necessary to avoid crowding the pan. Cook until pink on each side, about 3-4 minutes per side. When done, move to a serving platter and serve with the allioli.

Lightly adapted from Tapas: A Taste of Spain in America by José Andrés

Combine the garlic, salt, egg, and lemon juice into a mixing bowl or narrow-sided container that can accommodate a stick blender. Using a stick blender, process the ingredients until the garlic is pureed, and then start slowly drizzling in the olive oil until the mixture begins to emulsify and thicken. Let chill in the fridge before serving.