For years now, my go-to gazpacho recipe has been an adaptation of one from José Andrés, and it’s a really solid recipe. (I just don’t go through with all of the toppings that he puts on top of his, because usually I don’t have time for that.) It’s one of my default summertime dishes, something I know will always be refreshing and nourishing and delicious, and stupidly easy to make even on the hottest days.

I’ve tried a few others since then, from Andrés’ white gazpacho to Bourdain’s take on the same dish, as well as Stephanie Izard’s mango and Marcona almond version. They’re all fantastic too, but they are all iterations of the almond version of the soup, and sometimes the heart wants a taste of summer in the midst of a nasty cold snap at the beginning of February. 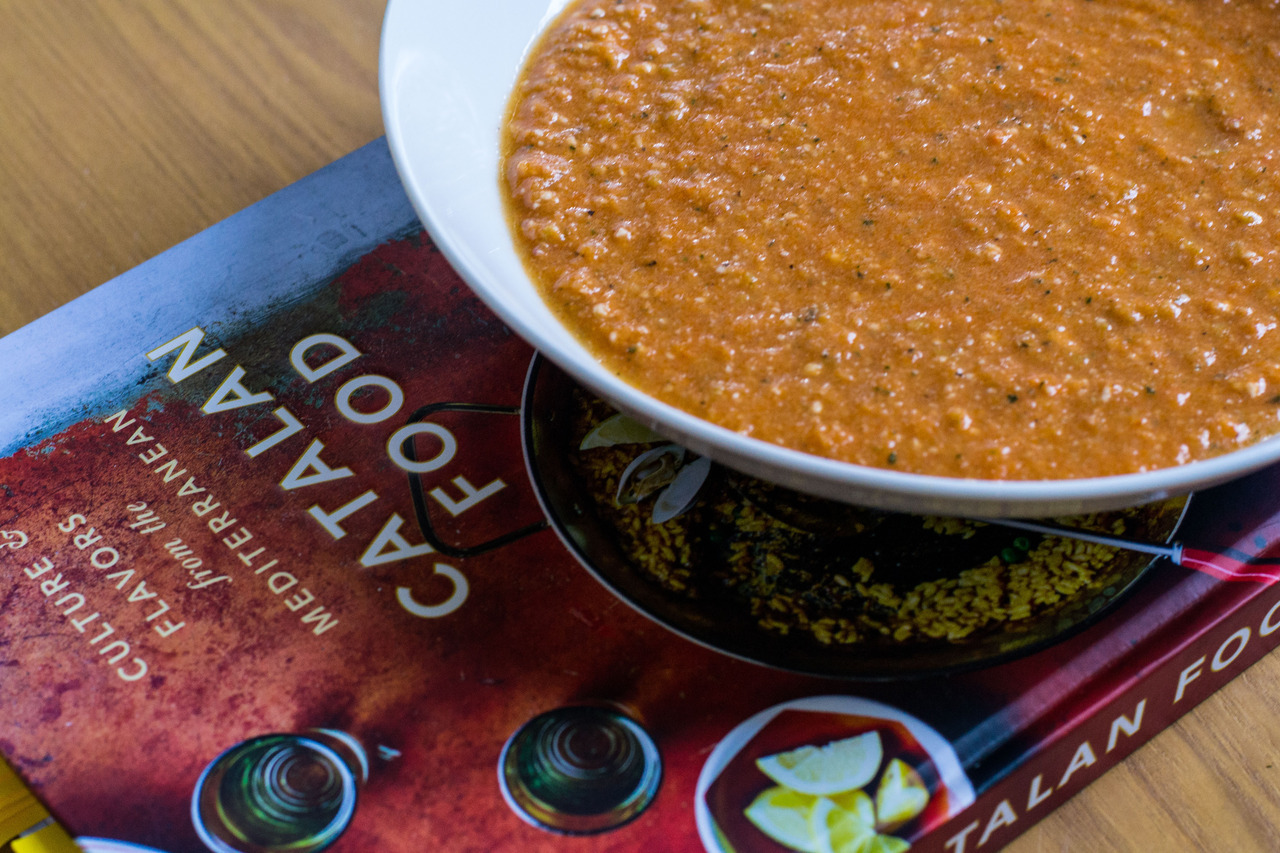 So one recent Saturday morning when I was flipping through my new book Catalan Food, I saw a recipe for gazpacho that intrigued me, because Daniel Olivella says that if you wanted to make this during any time of year when heirloom tomatoes weren’t available, a 28 oz can of canned plum tomatoes would work well in their stead. I have to say that I was extremely intrigued by this, so I decided I would have to give this recipe a try to see if it actually worked.

Now, gazpacho (or as it’s written in Catalan, gaspatxo) is not inherently a Catalonian food as it hails from Andalucía, but some of the best versions of it are the ones I’ve had in Barcelona. This recipe seems to combine elements of both the original white version of the soup (using almonds, bread, and garlic) as well as cucumber, peppers, and tomatoes, so I was curious to see how a.) all of this would come together, and b.) how the hell was one expected to process all of this food in one blender or food processor. The answer to my first question was that the soup is far heartier than you would expect, and as to the second question, the recipe required me to work in batches. Basically, you process the almonds, bread, garlic, and mint (yes, mint—and it adds a nice burst of freshness!) first, then add in the cucumber, onion, and peppers and blend until they are finely chopped but not completely pureed.  Those contents get dumped into a large bowl, and then you add the tomatoes, olive oil, and vinegar into the blender/food processor and finely chop them before combining everything, seasoning the hell out of it with salt, pepper, and more vinegar, and then letting it chill for a couple of hours. 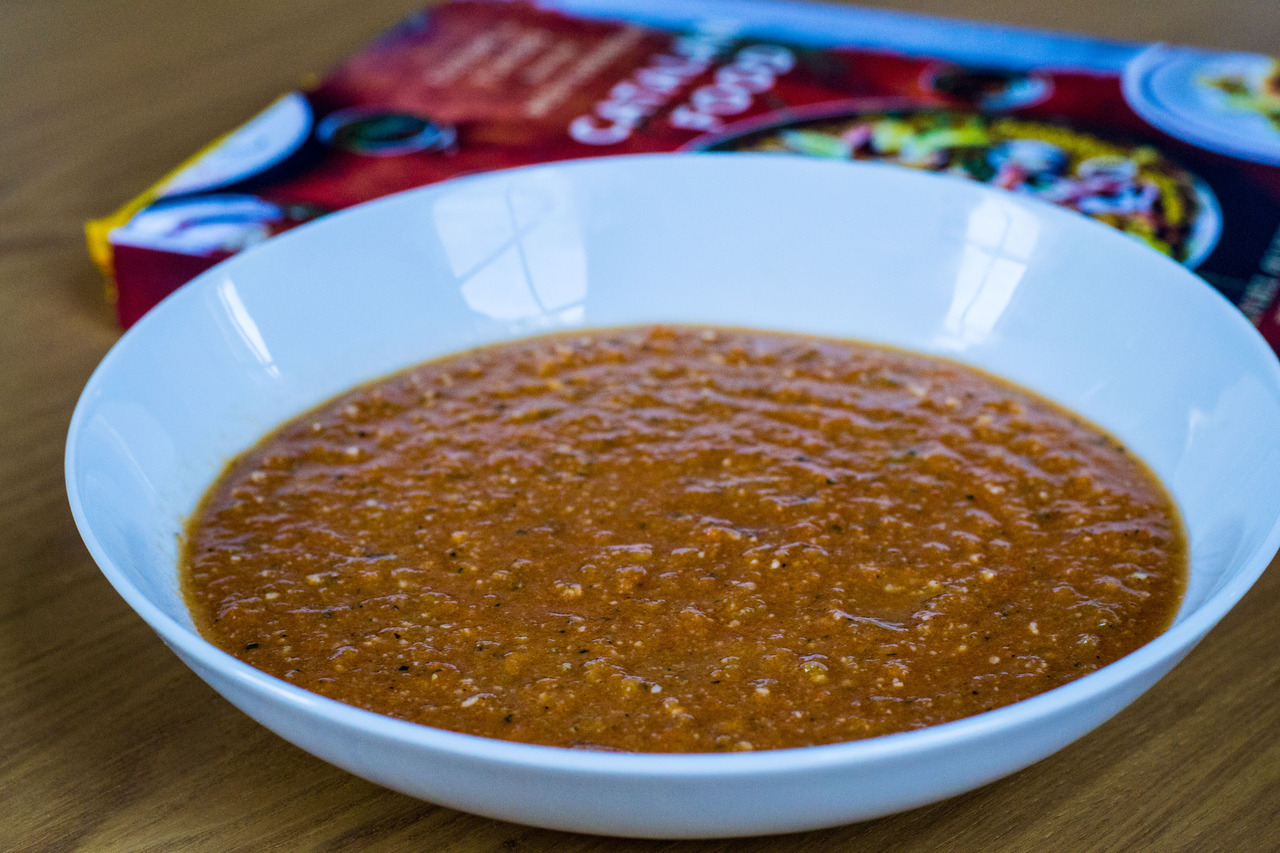 The soup that results from this work is so freaking good; the almonds give it heft, while you get so much body from the vegetables. The canned tomatoes do not taste like canned tomatoes at all, and it’s a totally genius way to make this soup when fresh tomatoes are less than ideal. I have a heavier hand with the salt, pepper, and red wine vinegar than prescribed in the original recipe, but that’s because there’s a huge bowl of vegetables that you’re seasoning and you want to do it well.

I’m tempted to make this the next time we have friends over to see if they can tell that there are canned tomatoes in this that are not cooked further, but also because I think that they’d really enjoy it. I’m tempted to make this for myself for an upcoming work trip, if only because the hotel I stay at persists in keeping the gazpacho on their restaurant’s menu even though it’s out of season right now. Hell, I’m half-tempted to tell them to make this instead. 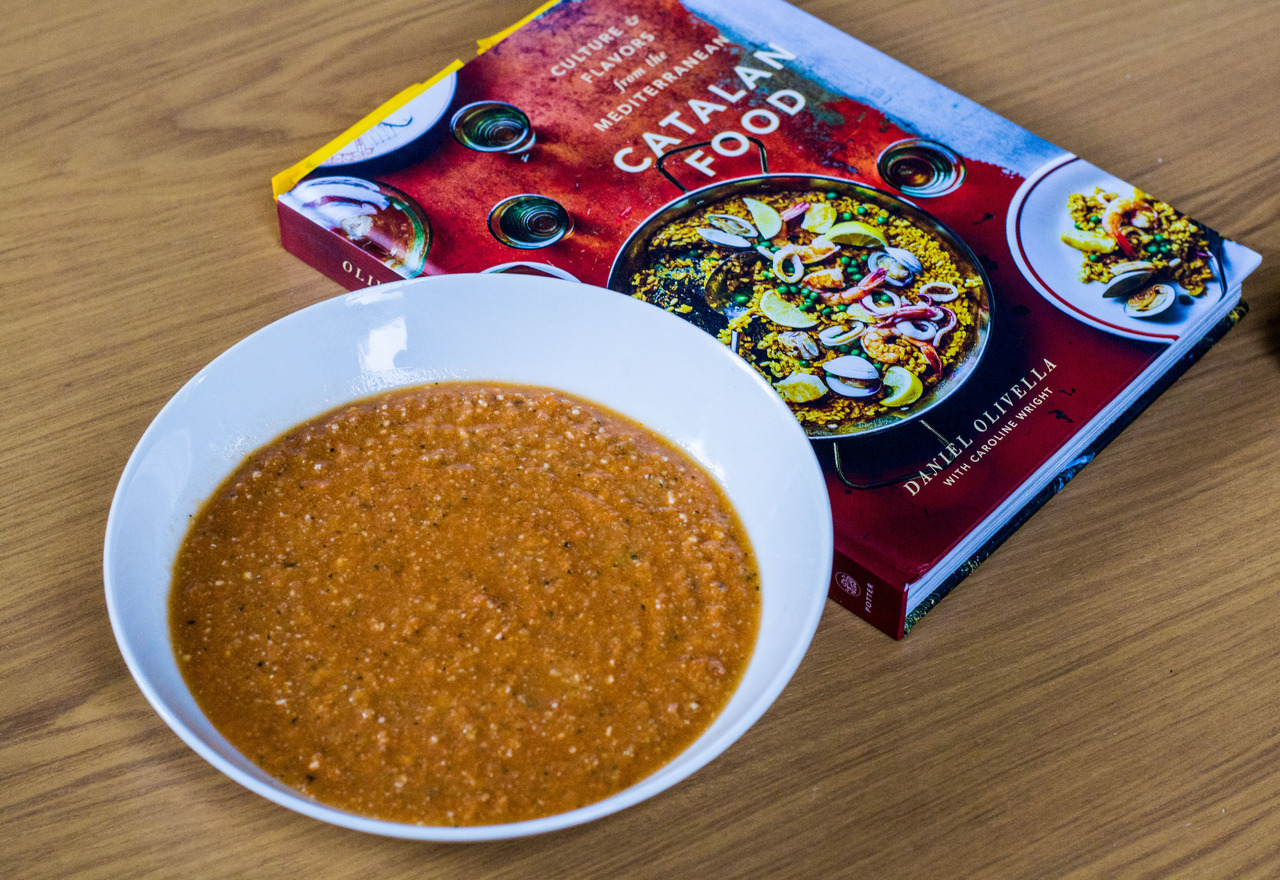 Serves 4-6 as a first course

Soak the bread in cold water and let sit until softened.

In a blender carafe or food processor, add the almonds, garlic, and mint, and pulse until the mixture starts to look like wet sand. (Add a little water to the blender to help bring this about). Squeeze out the water from the bread and add this to the mixture, and blend until smooth. (Again, add a little extra water to help this if you’re using a blender.) Add the cucumber, onion, and all of the peppers, and start pulsing until they are finely chopped but not pureed. Empty this into a large bowl, but don’t clean out anything that is left behind.

Add the tomatoes (and the juice if you are using canned), olive oil, and the 3 tablespoons of the red wine vinegar to the blender and once again pulse until finely chopped. Stir this into the bowl with the vegetables, and then start seasoning the whole thing with generous amounts of salt, black pepper, and additional vinegar. Add additional olive oil if needed as well.

Chill this for at least 2 hours before serving. To serve, pour into bowls and finish with a drizzle of really good olive oil, ideally.