Last August, after our little venture to Centralia and our college reunion in, M and I took our friend C to Philly so she could get her flight to Dublin and we decided to spend the night in the city and head back first thing Monday morning. We hadn’t properly celebrated Michael’s birthday at that point, and so I decided I’d take him out for a really nice dinner somewhere in the city. I asked for recommendations, and a clear consensus emerged that Zahav was a must-visit. It was also clear that many people feel that way, as there were absolutely no reservations to be had, but they offer the option of waiting to eat at the bar which is first-come, first-serve. I think we waited all of 15-20 minutes with a nice cocktail in hand when we were waved over to take our spots at the bar, which was done in the most efficient and civil manner. (There’s no need to hover–just put your names in and the waitstaff will alert you when it’s your turn to take a seat.)

We took the tasting menu option where we could make some choices from each part of the menu, and that meal ranks among the best we ever had. (My only quibble is that the lighting there did not lend itself well to taking photos, but that could be the point.) The meal starts with an assortment of six salads, all of which are extremely flavorful and highly distinct, and I was a little bummed to see that none of these salads could be found in the pages of Zahav the cookbook.

Fortunately, that’s been remedied with the release of last year’s Israeli Soul, which I highly recommend looking into if you have any interest in Middle Eastern food. While the primary focus of the book is clearly food from Israel, you’ll get glimpses of other cuisines in there as well, such as matbucha, a Moroccan tomato and pepper salad. Unlike many of the salads featured in the book, this one is cooked so it almost feels more like a relish than a salad, but however you want to look at it it’s positively delicious. As I was taking tastes of it while making it a few weeks ago on a quiet Sunday morning, I was immediately transported back to Zahav as the memory of eating this flooded my brain.

Incidentally, it also works really well as a brunch dish. Paired with some soft-scrambled eggs, it’s substantial but won’t weigh you down for the rest of the day, and it all comes together fairly easily so if you do have other things to do in the afternoon, this won’t take up too much time in the kitchen. (For much of the cooking you can let it sit, stirring occasionally.) I’ve been really into soft-scrambled eggs lately–sometimes I like them a little runnier like they are in the Basque mushroom eggs dish, but other times I don’t mind them done a little further when they are still fluffy, but not overly hard or browned.

If you’re looking for something different to enjoy for a light brunch, lunch, or even an easy summertime dinner, definitely give this a try. 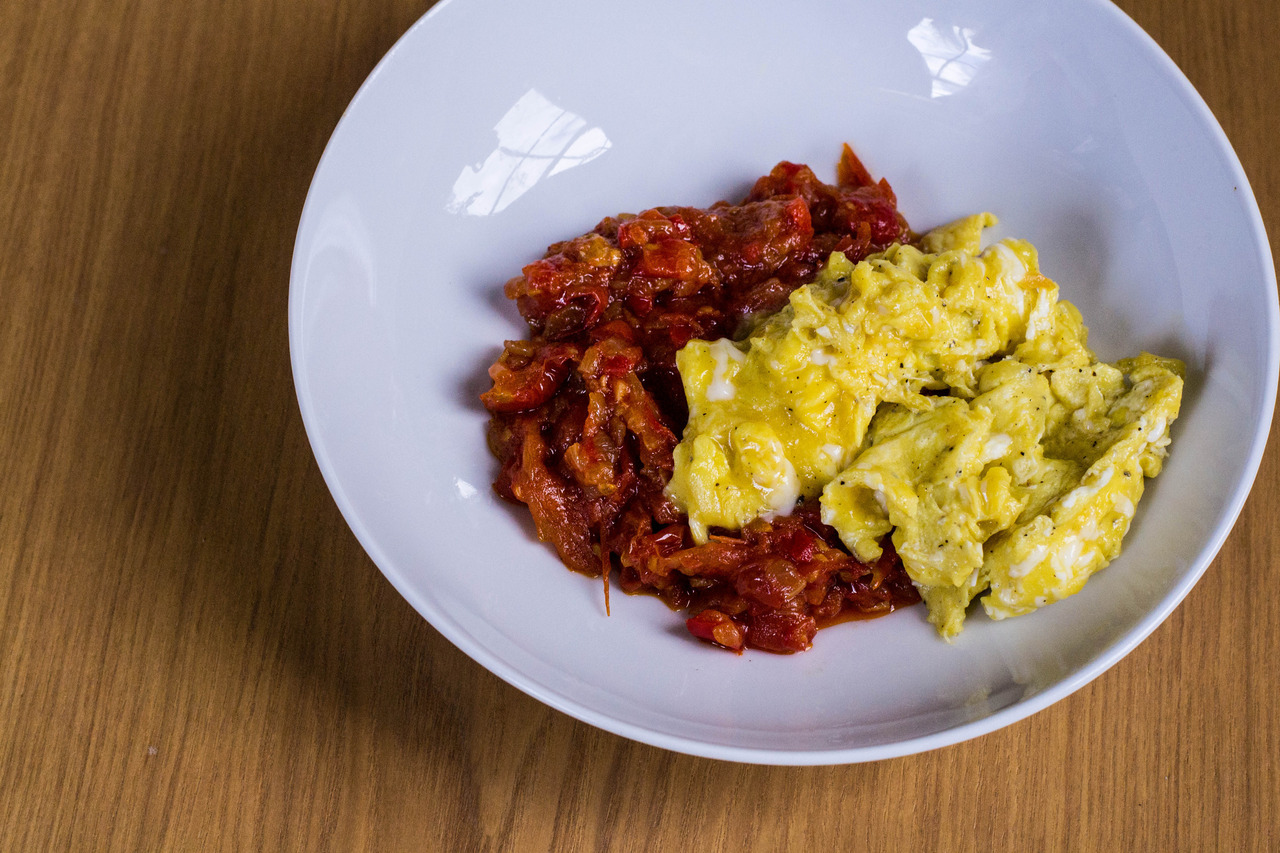 Make the salad: Heat the oil over medium heat and saute the pepper, onion, and garlic until translucent, about 15 minutes along with a tablespoon of kosher salt. Add the tomatoes and cook for 60 to 90 minutes until the mixture resembles a chunky tomato sauce. When cooked, transfer to a bowl, taste for any additional needed salt, and then add a squeeze of lemon juice and a drizzle of olive oil, and then top with cilantro leaves. Let sit while you scramble the eggs.

Scramble the eggs: In a medium-sized bowl, whisk the eggs with a pinch of salt and cayenne pepper, if using. Place a small non-stick pan over medium heat and heat the tablespoon of olive oil. Add the eggs and cook, stirring, until they are just set. Remove the pan from the heat and divide the eggs and salad among plates and serve immediately.