One of the things that I’ve loved the most about watching Good Eats: Reloaded is that Alton Brown revamped his recipes from back in the early years of his show to make them modern, more interesting, and more flavorful. They clearly reflect the fact that his culinary worldview has expanded exponentially, and it all makes me so excited to see what will come when we finally get Good Eats: The Return in a few months. For me, the most compelling recipe that came about the thirteen-episode revisit was how he has tinkered with his recipe for roasted chicken, and it’s so damn good that it’s one that we’ve not only made for ourselves several times, but one that we recently made as part of our rehearsal dinner spread for my now brothers-in-law.

But we’ll get to that in a minute. 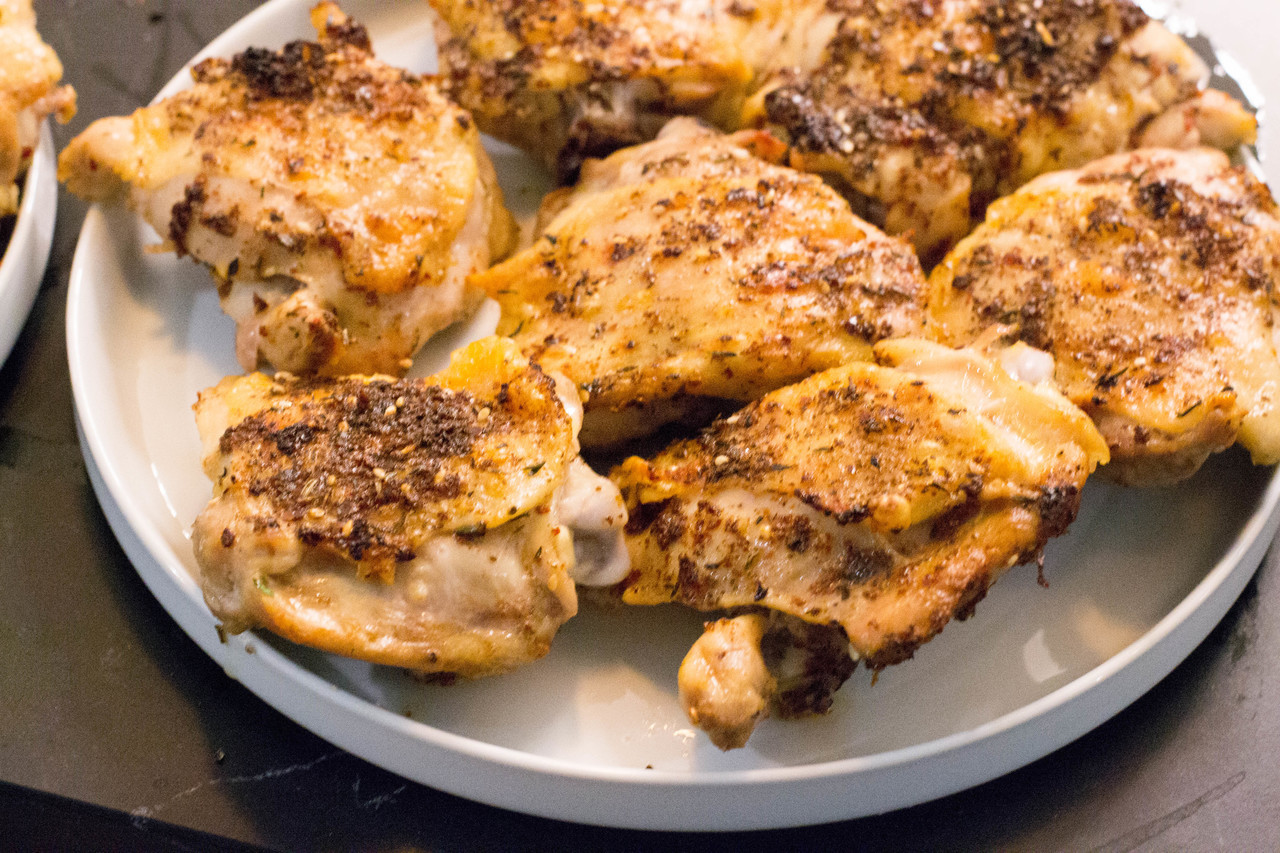 In his Reloaded version of “A Bird in the Pan,” Brown mentions that as he’s tinkered with his recipe for ages, his ultimate recipe for spatchcocked roasted chicken is one that would never have existed when he first filmed this episode because he simply didn’t know that the ingredients existed: Aleppo pepper and Za’atar seasoning. The former is a pepper originally from Aleppo, Syria but is now mainly grown in Turkey now due to the Syrian Civil War, and the latter is both an herb on its own in the Middle East but also a blend of hyssop, sesame seeds, thyme, sumac, and salt. They are both delicious and very easy to access now because of the internet, but nineteen years ago, the idea of being able to order either and have them at your door in a few days was next to impossible. 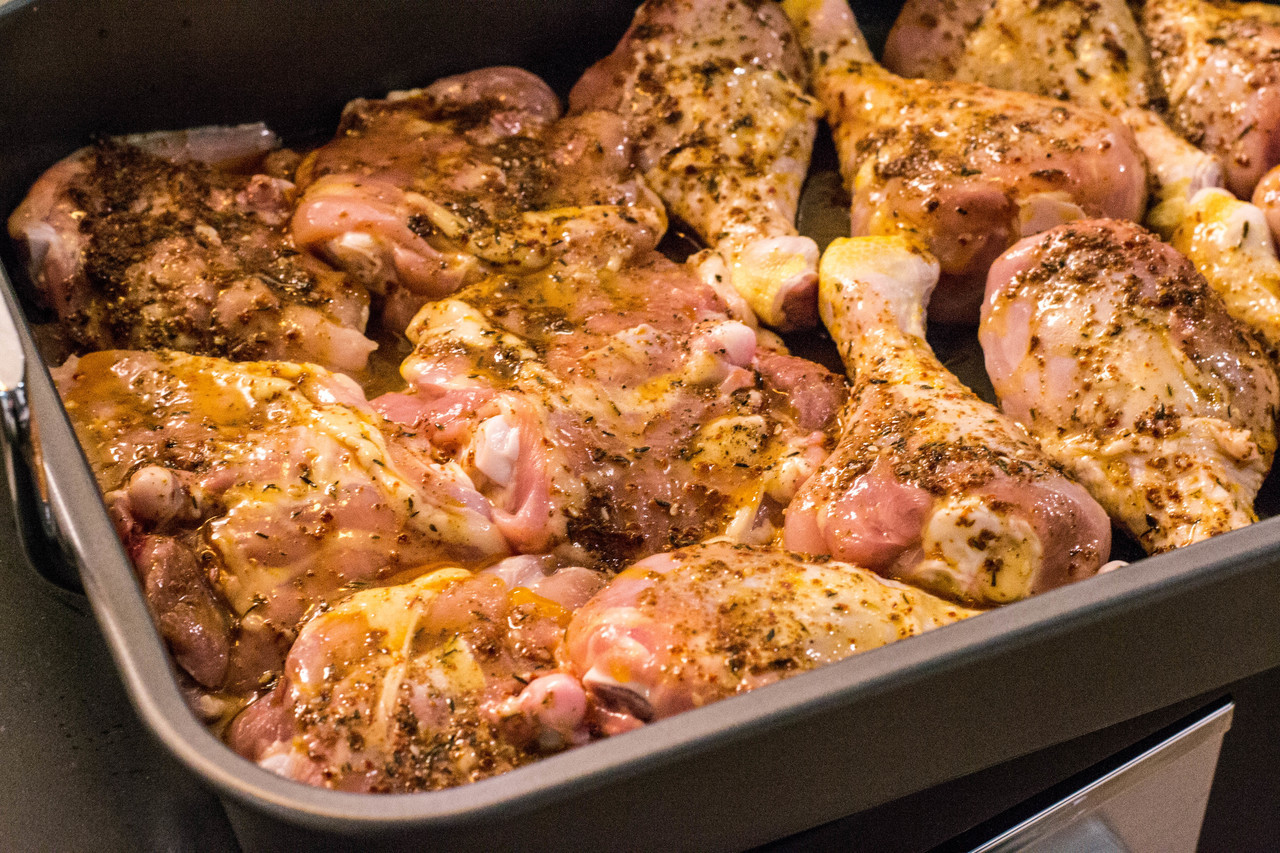 In what seems like ages ago now, M’s brother D asked us if we would be interested in making the rehearsal dinner for his and his fiance E’s upcoming wedding, and we were all ABSOLUTELYYESDOTGIF. About a month before the festivities, we came up with two menu options for them–one Mediterranean and one more Latin-inspired–and they unanimously went with the Mediterranean version, which had two gazpachos, shrimp scampi, homemade pasta, a peppery salad from Gail Simmons, and the aforementioned revamped chicken recipe from Alton Brown. The dinner went off without a hitch, and we were happily able to send leftovers of the chicken home with local attendees.

There was a note on the schedule of events that I was among those who could say a few words during the rehearsal dinner if I felt so inclined, but ultimately I didn’t because the meal really spoke for itself more eloquently than I ever could. This was a labor of love in the truest possible sense, made together with my husband to celebrate the union that has brought us our newest family member. With any luck, it at least helped set the tone for the next 36 hours, with perhaps the most memorable highlight of that time being the sight of D and E on the rooftop of a former vo-tech-school-turned-event-space in Philadelphia pledging their love to each other as the Pride flag flapped gloriously above them.

I’ve written about a few of the dishes leading up to the momentous event, but this chicken dish feels particularly meaningful because it represents so much progress. Much as it was unfathomable to imagine a Food Network host using Aleppo pepper and Za’atar seasoning back at the turn of the century in a mainstream cooking show, the idea of marriage equality in all 50 states was as inconceivable; happily, both are very much our reality today. My hope for the future, though, is that the existence of LGBTQ+ marriage and the usage of interesting flavors that hail from diverse countries both become so commonplace and normalized that they are like the presence of E in my family in that none of us can remember our first time meeting him because once he arrived, he was always part of our crew.* Our society and our palates will be better for it.

So I implore onto you: make this chicken part of your next celebration. Make it for anyone in your life who might feel marginalized in today’s world. Make it for yourself because you need it. Make it for your loved ones on an otherwise random Sunday night. Just make it, because it will make you feel better about the world, much like this wedding did for me.

*Credit to my SIL G for making that poignant observation during her wonderful remarks at the wedding. 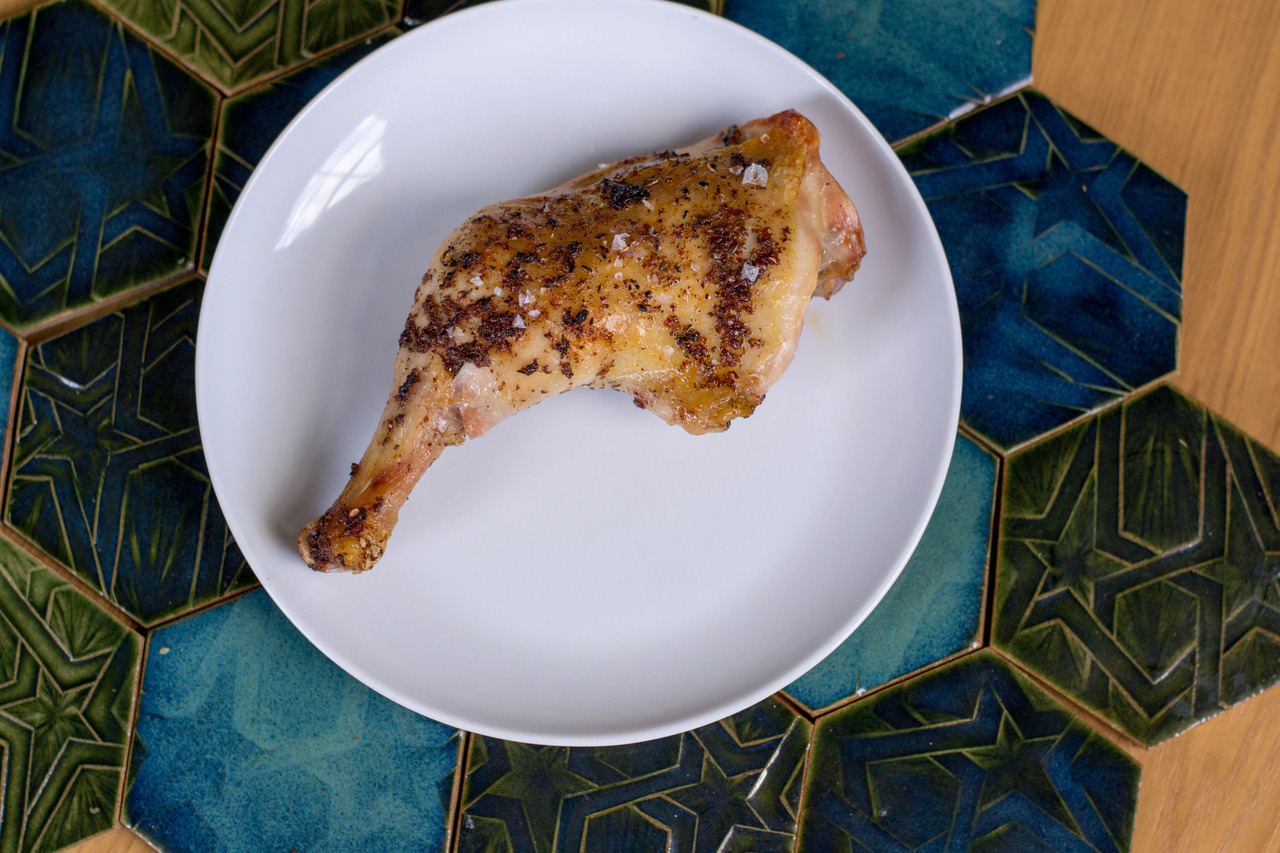 Heat the oven to 425 degrees, and take out your chicken. Trim any excess skin or fat from the thighs and drumsticks, and let them sit at room temperature; if they are rather wet from their packaging, follow AB’s advice and let them dry out, up to two hours.

In a one-cup metal measuring cup or small metal bowl, melt the butter with the Aleppo pepper and the Za’atar seasoning until the butter is infused and it takes on a reddish color.

Arrange the chicken on half-sheet pans lined with foil, skin-side down. Brush half of the butter and herb mix on the chicken, and season with one teaspoon of kosher salt over the chicken. Roast for 25 minutes, and then turn over and brush with the rest of the melted butter and the additional teaspoon of salt over the chicken. Cook for another 25 minutes or until the chicken hits 165 degrees if using a remote and/or instant-read thermometer. Let rest for at least 10 minutes before serving, seasoning with additional kosher or sea salt if desired.