Last summer, while flipping through Mastering Pasta for the umpteenth time looking for inspiration for weekend dinners, I turned to a dish where Marc Vetri had paired paprika-flavored pasta with very traditional Spanish ingredients including octopus, Marcona almonds, and an Iberian ham broth. If I liked octopus more I would have made it directly, but because I don’t I started thinking on how else I could use paprika-flavored pasta and it came to me almost immediately: cook them like I would migas! 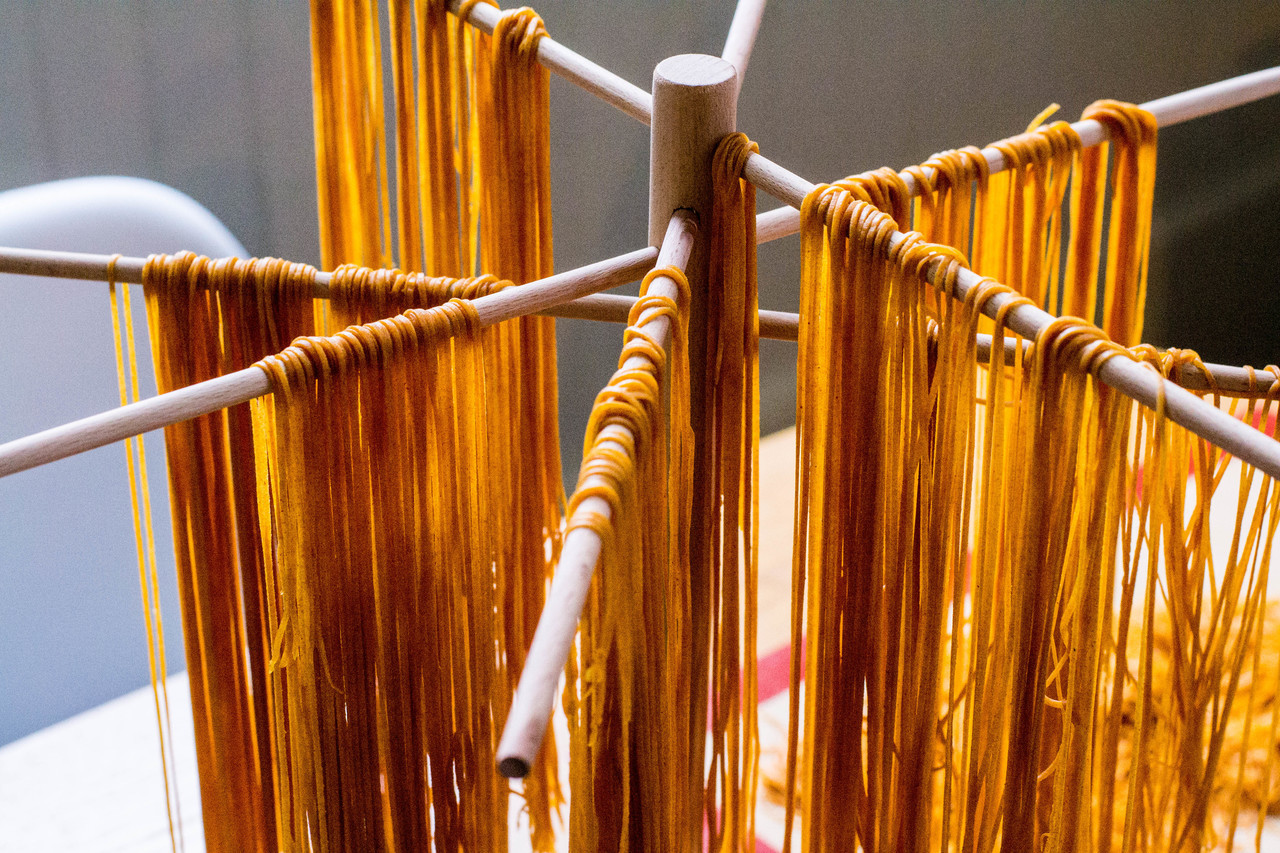 Throughout Spain, migas is a dish in which day-old bread is cut into cubes and fried with some sort of meat, often ham, bacon, chorizo, and/or another sausage. The idea is to use whatever you have on hand to help extend the bread’s usefulness beyond its fresh state, and you can toss in other ingredients to add flavor and texture. My favorite version of this dish comes from José Andrés’s Made in Spain, the companion cookbook to the PBS series of the same name because it touches on some of my favorite Spanish ingredients like mushrooms, spicy peppers, and of course–jamón.

The first time I made this I stuck with only using ham ends that I picked up from The Wine Source. (Hint: if you have a good local deli that sells a variety of charcuterie, always ask them if they have any ends or bones that they’d be willing to sell to you. The price is usually super-reasonable and they are perfect for dishes like this one where you want to render out some fat from them.) The resulting pasta came out well, but I felt like it could use a little more substance so when I made it more recently, I added a link of mild sausage to the mix. Yep, that did the trick.

The paprika (in Spain, it’s called pimentón) the pasta dough really does add a nice dimension of smokiness, and it makes me want to explore Vetri’s other kinds of pasta including the one made with red wine. This is not that tricolor fusilli that Howie mocked during the third season of Top Chef, and this dish is not your typical bowl of noodles, but it’s a tasty one nonetheless. 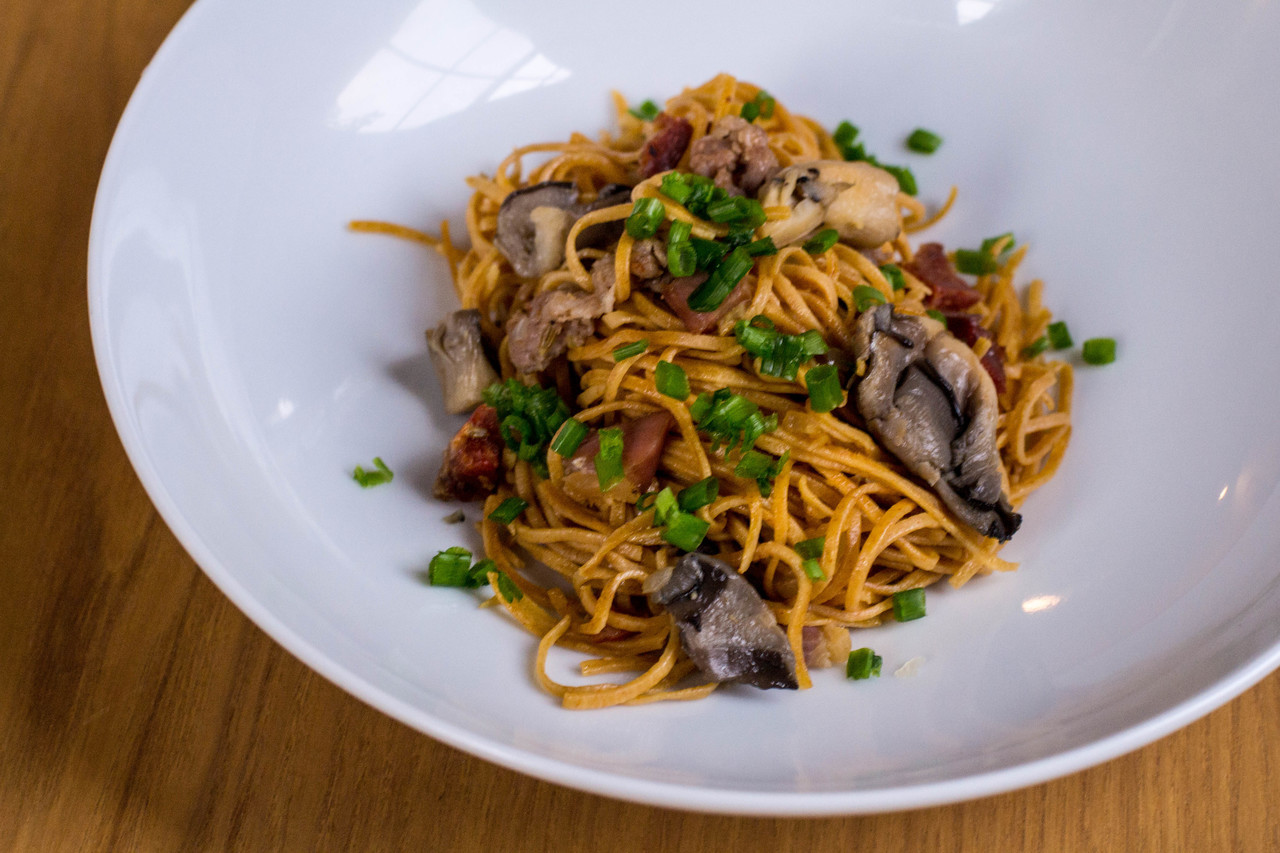 Combine the flours with the paprika and make a well on a counter or wooden cutting board, placing the egg yolks and olive oil in the middle. Using a fork, gently break the egg yolks and stir with the flours, incorporating more as you go and being mindful not to let the well walls break. As the liquid is absorbed, bring together more flour and start forming the dough, adding a tablespoon or two of water as necessary to it. Form into a smooth dough ball, wrap with cling wrap and rest for at least 30 minutes before using. (When ready to use, let it sit out for 10 minutes before rolling.)

To roll out the pasta, use a bench cutter to cut off smaller pieces and roll the dough three times through the widest setting and then once each through level 6 on an Atlas machine. Switch over to the narrow cutter and cut the dough, placing it either on a silicone mat or a drying rack. Repeat with the rest of the pasta dough.

When ready to make the pasta dish, bring a large pot of water to boil. In the meantime, heat the olive oil over medium-low heat, add the sausage, and use a spatula to break the sausage into smaller pieces. Add the ham/chorizo and render out the fat, about 10 minutes. Raise heat to medium and add the shallots and cook until translucent, about 3 minutes. Ad the banana peppers and cook for another 3-4 minutes before adding the thyme and mushrooms. Season with salt.

When the pasta water is boiling, season with about a tablespoon of kosher salt and drop the pasta into the pot and cook until the pasta floats, about 3 minutes. Reserve a cup of the pasta cooking water and then drain the pasta. Add to the saute pan and place it on low, stirring well to combine all ingredients. Adjust seasoning and then garnish with minced chives before serving.