A very silly problem in the life of a food blogger is that in your quest to try lots of food, you end up neglecting favorite recipes until you make them randomly and then berate yourself for not making them sooner. Having arrived home after a little jaunt a few weeks ago, I was on the couch in our living room thumbing through a bunch of cookbooks and quietly freaking out over what to make for the week. After a few days of eating out, I was definitely ready to get back in the kitchen, but aside from ceviche, I had zero clue as to what else to put on our meal plan and my shopping list. 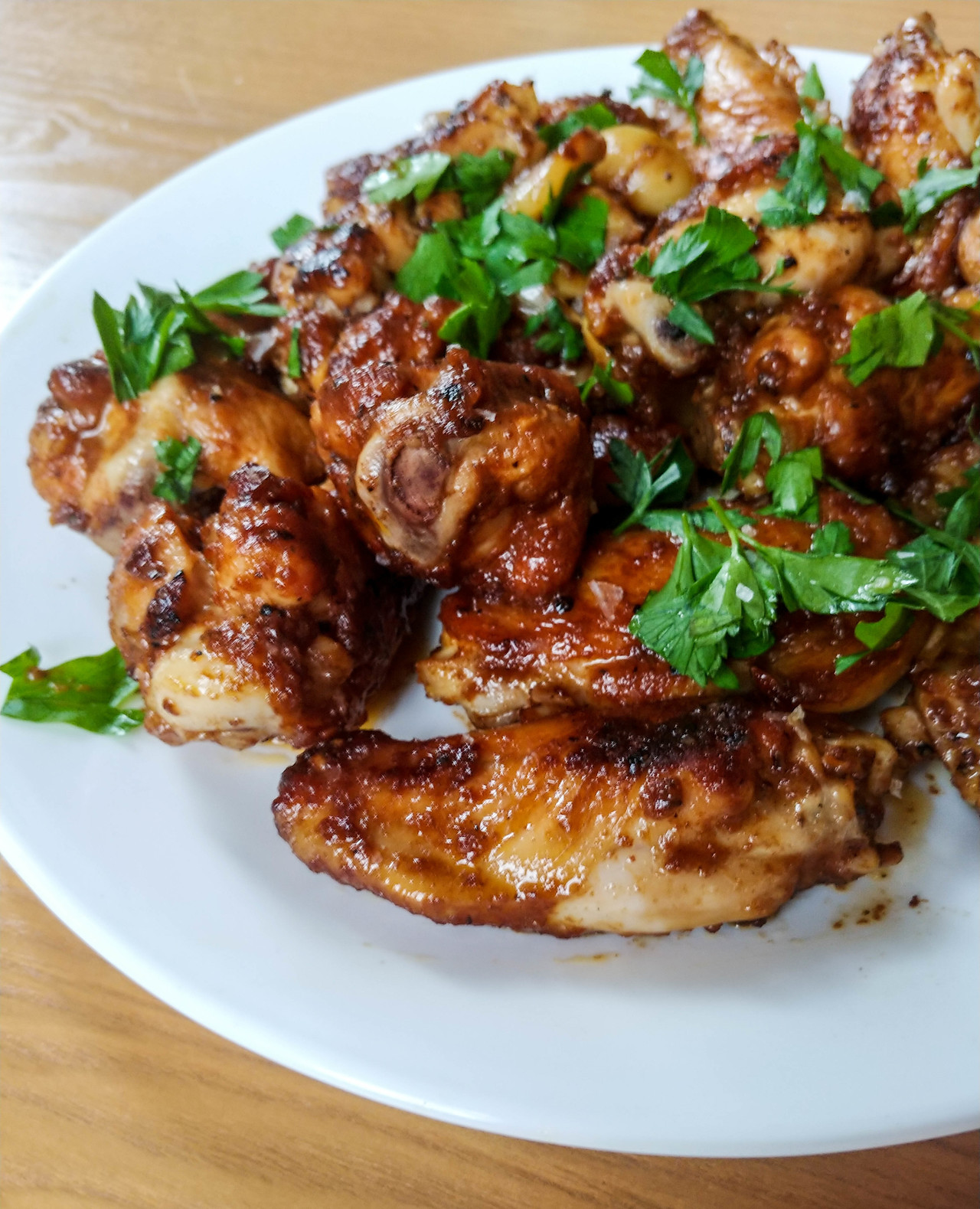 The weeknight meals came together pretty quickly using some favorites from our normal rotation of recipes, but what was making me unreasonably anxious was determining what to have on a Sunday evening. I like to save our cooking projects for the weekend so we can work on them together, and now that the longest day of the year has come and gone I know that my days of glorious natural light in the evening are getting numbered and so I want to make the most of them by making something meaningful. (Another very silly problem, I know.) Seeing that I was roiled in indecision and eager to get going after the soccer match I was watching ended, Michael came to my assistance and suggested making chicken wings in the style from “that Spanish Country Cooking cookbook” I bought so many years ago. Immediately realizing which one he meant, I was instantly on board and could watch the rest of the third-place Women’s World Cup match in relative peace.

(Unrelated: Phil Neville, manager of the English women’s side, declaring that he really wanted the bronze medal “because in certain lights it looks like gold” before the match and then saying that the match was “rubbish” after their loss was so douchey. So much for good sportsmanship!)

But let’s get back to the wings. What I really like about this recipe is that it’s pretty low-key and doesn’t require a ton of ingredients, but they all come together to make something that’s more than the sum of their parts. When I originally wrote about this recipe I noted that I let the chicken sit overnight in the salt, pepper, paprika, and flour if I’m making this during the week; that’s still true, but for a reasonably easy weekend dish (especially as part of a tapas spread) letting the wings sit at room temperature for 30 minutes is also fine while you prep other dishes.

I also made the assertion that using white wine or vermouth is totally fine if you don’t have sherry on hand; while still true, using sherry does add a little more buttery body to the chicken and like vermouth and marsala can sit in your liquor cabinet to be used as needed.

While thighs have been my go-to default for years with this dish, I think I might like the wings a little better? They don’t take as long to cook, they are very tender, and there’s more surface area to get the seasonings on so each bite is more flavorful. So I think I’m going to have to not only make these again really soon, but also add them to our party recipe rotation. 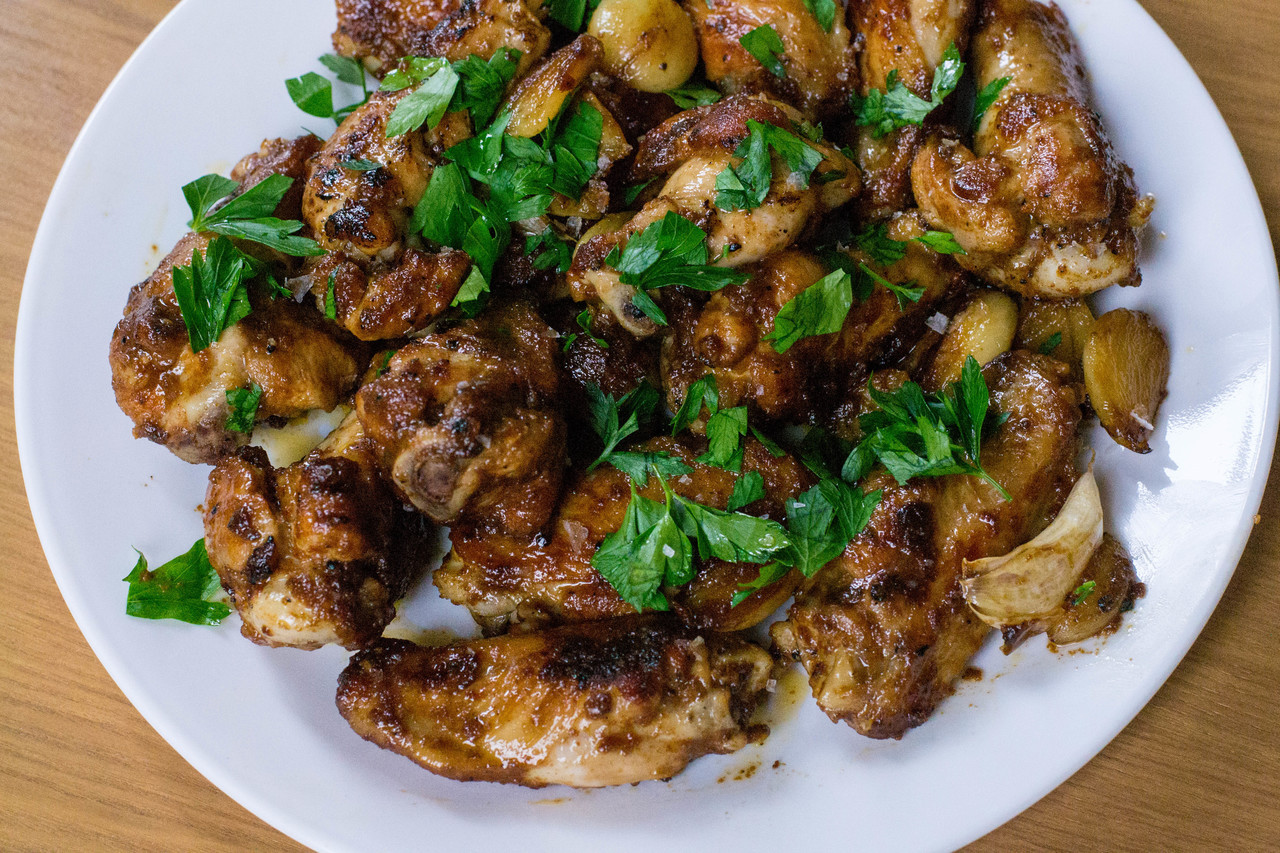 In a large, resealable bag, combine the flour, paprika, salt, and pepper and then add the wings; close it and toss well to coat evenly. Leave it to sit for at least 30 minutes.

In a large skillet, heat the olive oil over medium heat and then add the garlic. Saute the garlic for at least 2 minutes, then remove them with a slotted side and set aside. Add the chicken wings into pan and saute on one side for 5 minutes, and then flip and saute them for another 4-5 minutes. Add the garlic back into the pan, along with the sherry or wine and bay leaf or leaves. Simmer the wings for about 20-25 minutes, checking the temperature of them at the 20-minute mark, until they are at a temperature of 165 degrees. Serve on a platter with the parsley leaves.