“Tomatoes—wholesome, unextravagant, and endlessly photogenic—exist somewhere in the comforting middle, a mundane joy in an absurd world.” – Amanda Mull

Fall Creep is real, and I’m seeing it this year on all fronts, from the pumpkin-spice tea display that’s been at my Harris Teeter since the end of July, to the people on my Facebook feed whining about why it’s not fall yet, and of course the breathless news reports of the latest companies jumping on the pumpkin spice bandwagon, because apparently that’s still a thing. I would argue that the only good that comes out of Fall Creep are Last Week Tonight’s sendups of the latter trend:

These never fail to give me a laugh when I need one.

I’m particularly annoyed by it this year because, as The Atlantic’s Amanda Mull says, we’re in Tomato Season, that all-too-short time when tomatoes are plentiful and delicious, and I’ll be damned if Fall Creep is going to butt in and demand that we all pretend that it fall when IT’S NOT.

So instead, I’m going to luxuriate in the fact that it is in fact tomato season by sharing with you this fantastic way to eat them: make yourself some tomato tartare. 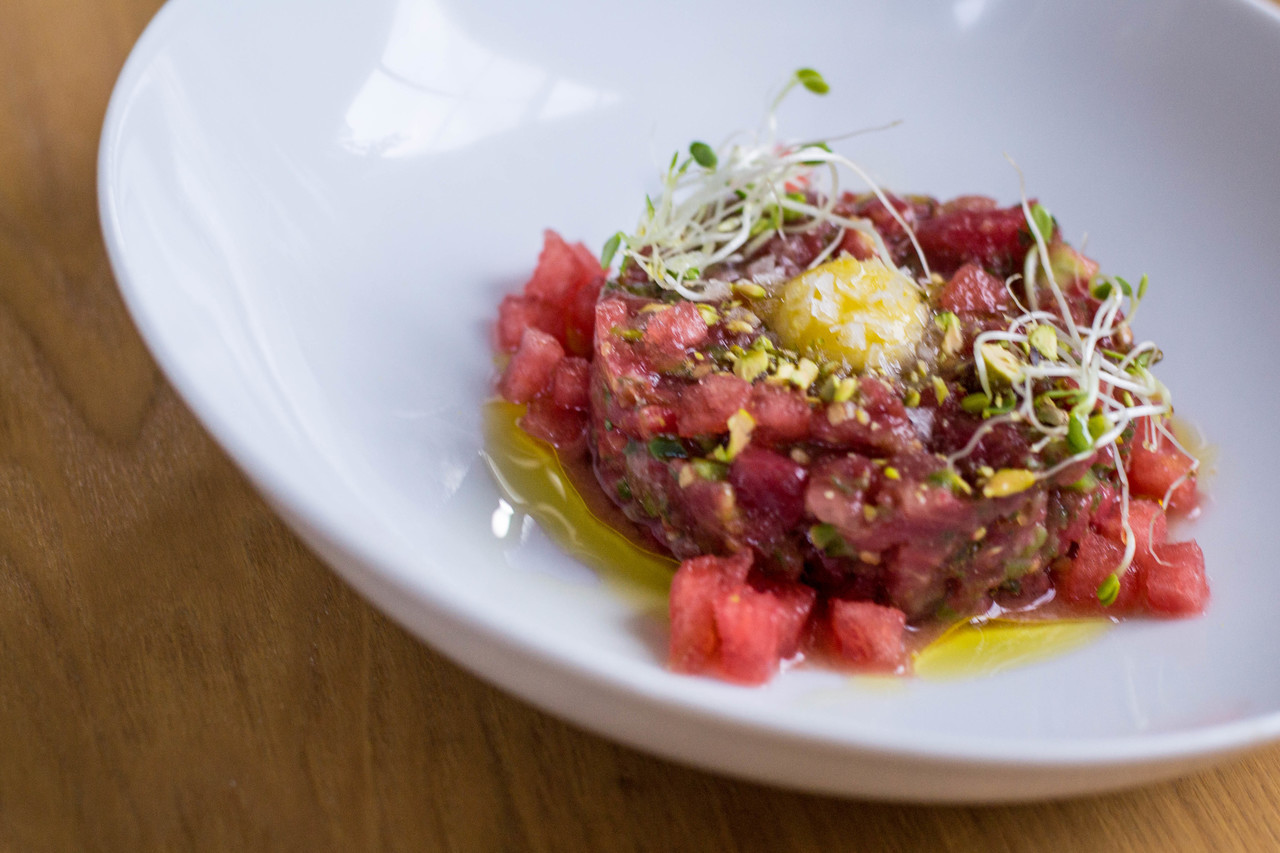 Towards the beginning of the “El Bulli” episode of No Reservations, Anthony Bourdain and José Andrés are at Tickets in Barcelona, one of Albert Adrià’s many restaurants in the city. They’re having a high old time revisiting El Bulli classics like spherical olives, but one dish that caught my eye when rewatching the episode for the umpteenth time is when Adrià brings out a plate of tomato tartare, complete with a quail egg yolk on top. It looked so tasty that I resolved to make it as soon as possible and started combing the internet to see if anyone had attempted to recreate it yet. I found one website that seemed to have a close-enough approximation, but I wanted to tweak it a bit to make it a little easier to make at home.

The trick to this dish is to allow yourself the time to do a proper brunoise on the tomatoes and watermelon* and mince everything else as finely as possible as that’s the bedrock of any tartare. You’ll also want to get the most fragrant and ripe tomatoes–heirloom if possible–that you can because while they are seasoned with Dijon mustard and hot sauce and the like, the tomato itself is the star and shouldn’t be overwhelmed by those other flavors. The quail egg yolk is a lovely addition and adds a bit of color to a mostly-red plate, but if you can’t abide the thought of eating a raw egg yolk of any kind, you can either poach the egg it before serving or ignore it altogether.

I say this because I really, really want you to make in defiance of Fall Creep. Fall doesn’t officially start until September 23rd, so let’s all calm down about donning scarves and boots and sweaters until then at the absolute earliest. That, or at least let me enjoy my tomatoes in peace.

*Yes, I know I said I don’t like watermelon, but it’s used so sparingly here as a garnish and it actually tastes really good with the tomato, so I’m allowing this as my one watermelon exception. 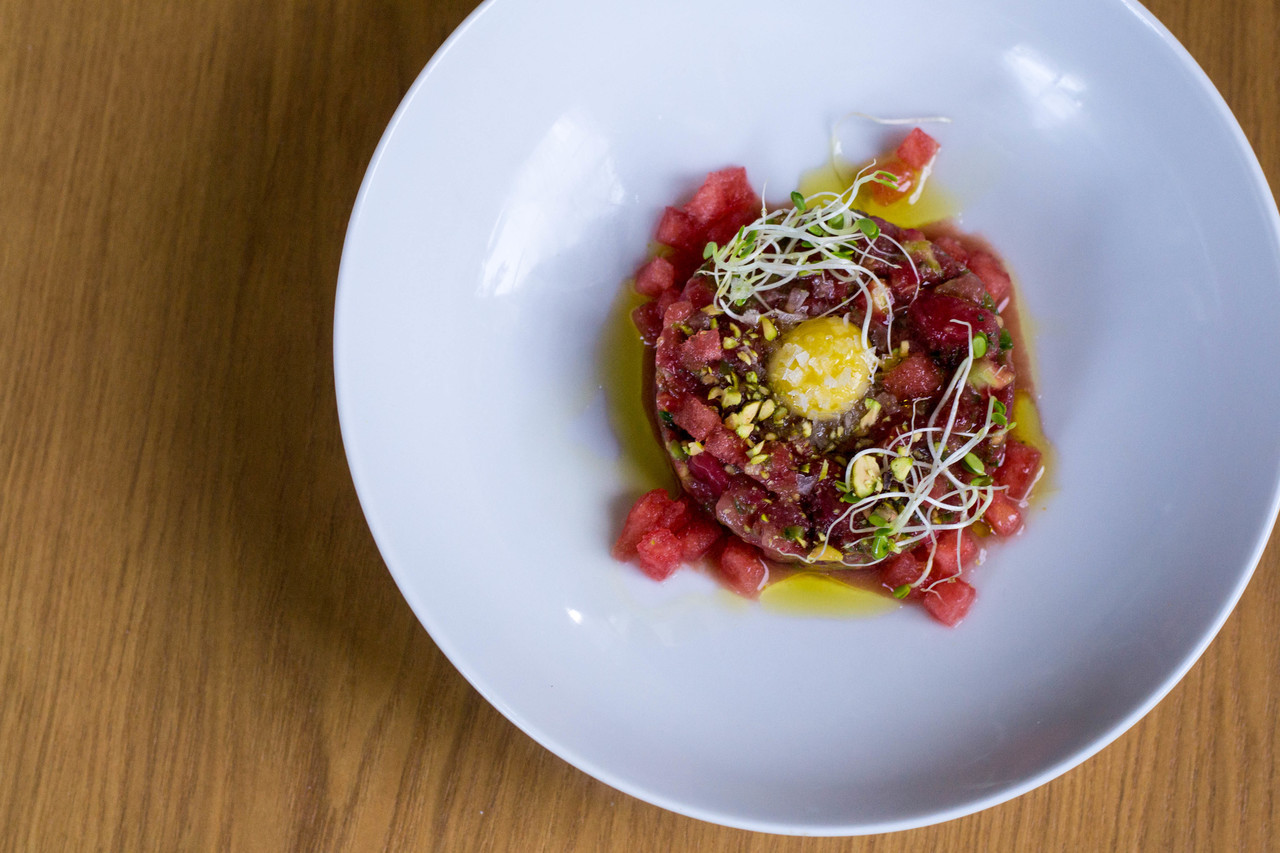 Inspired by Albert Adrià and adapted from this recipe

Serves 2 as a light appetizer or salad

Prepare the tomatoes: Bring a small saucepan of water to a boil, and have an ice bath ready nearby. Score a small X at the bottom of each tomato and place it in the boiling water, blanching it until the skin starts to loosen, about 20-30 seconds. Remove them from the pan and place in the ice bath to stop cooking. When cool enough to handle, peel the skin and then quarter, core, and seed the tomatoes. Carefully dice the tomatoes into a brunoise and place into a strainer to let some of the excess liquid strain for a few minutes before adding them to a medium mixing bowl.

Finish the tartare: mix in the mustard, Worcestershire, serrano pepper, oregano, and Tabasco sauce in with the tomatoes and season to taste with kosher salt. Let the mixture chill for 30 minutes before serving.

Serve the tartare: using a 3-inch ring mold, divide the tartare between two plates and if using the quail eggs, place a small indentation at the top of each tartare serving to hold the yolks. To get the egg yolks, use a pair of kitchen shears to carefully snip open the top of quail egg (about a third of the way down) and carefully strain out the yolk from the white using your fingers over a small bowl or sink. Place the egg yolk in the indentation and garnish with the watermelon, sprouts, and a drizzle of olive oil. Finish with sea salt and serve immediately.