Before we begin, I have to pay tribute to one of the best talking-head interview moments from reality television ever and I’m kind of shocked that in all of my discussion of scallops on this blog, I’ve never done it before now:

By the time Fabio says this in the seventh episode of the fifth season, Jamie had made and/or was in the process of making three scallops dishes and all told, those were the only ones she actually made during her time on the show. (Yes, I went and breezed through each episode to figure this out.) Now granted, those dishes were all condensed into two episodes so I get why Fabio said what he said, and if he also called out Jamie’s propensity to make soups as well, he really would be spot-on. 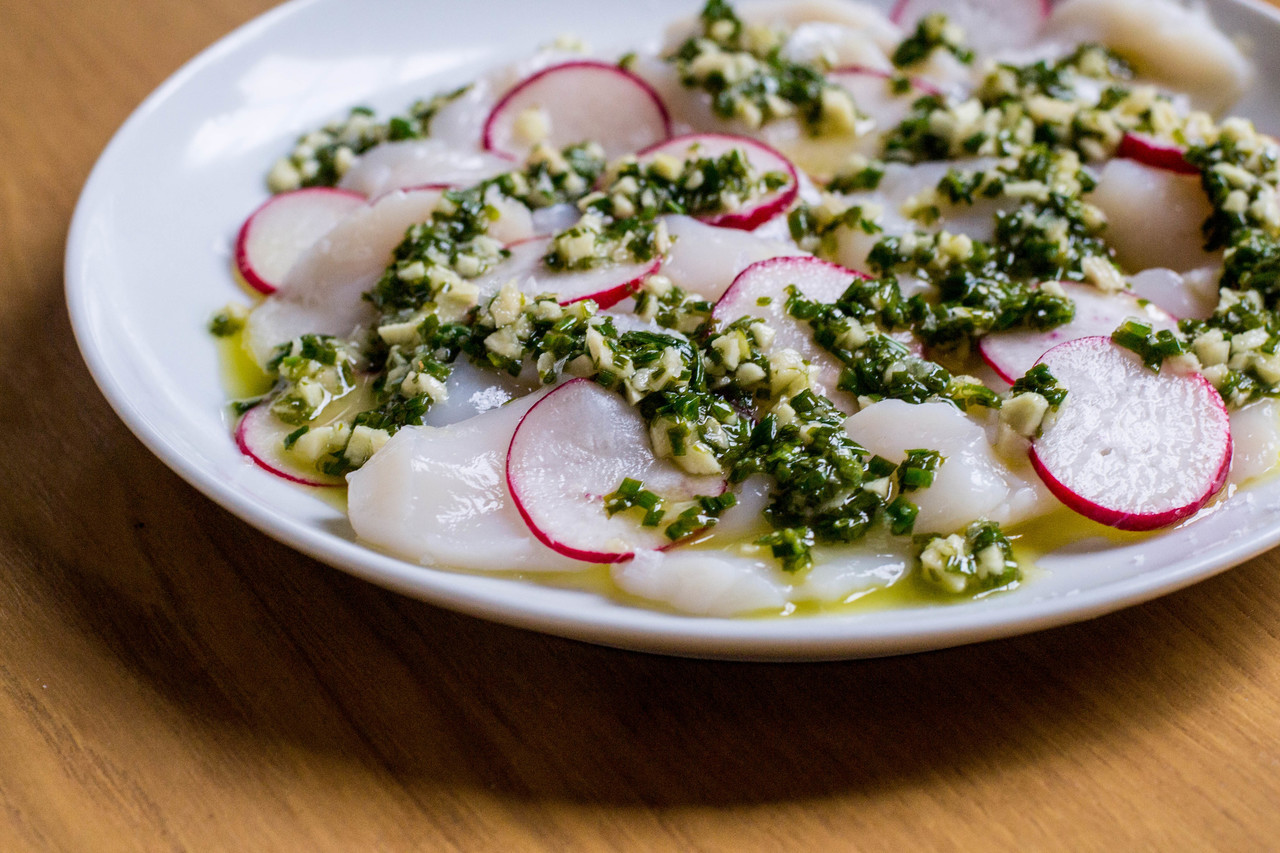 But enough about Top Chef; let’s talk about these scallops! I found the scallop carpaccio recipe in Food and Wine one Sunday afternoon last summer while sitting in Max’s, in search of something that would be easy and fast to make that we could easily pick up at Whole Foods on our walk home. I loved that there were similar flavors in the ginger-chive pesto that you’d find in ginger scallion sauce, albeit on a more delicate scale, and the radishes provided a fresh crunch to give the dish a little more textural interest. Of the handful of raw scallop preparations I tried last year, this is the one that keeps coming back into our recipe rotation when the temperature is unbearable. 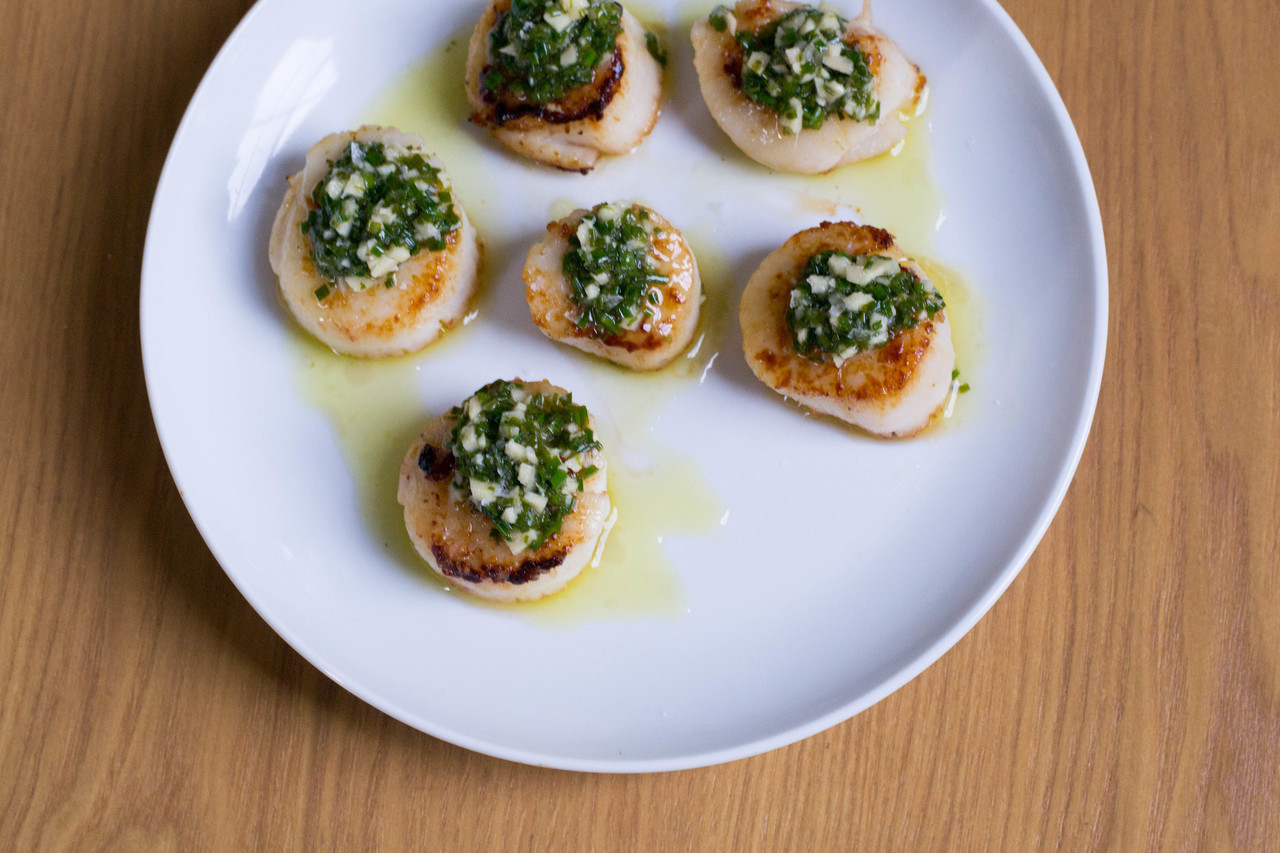 If the thought of raw scallops gives you the willies, however, I’m delighted to report that you can also pair the ginger-chive pesto with seared scallops. While this would require you to turn on the stove, searing scallops take considerably less time than other proteins, making it a fine choice if you want something cooked but don’t want to leave the stove on for too much time.

How we came to make these together was on account of an impromptu trip to Costco; needing to stock up on random household items as one does, I naturally had to make my way around the whole store in the pursuit of samples and noticed that they were selling really gorgeous sea scallops for even less than what Harris Teeter was as their sale price, so we loaded up on ice and went for a whole pound. Michael ended up handling the searing, I did the carpaccio, and while Michael posted a poll on which preparation people preferred, I don’t think we ever bothered to see which one emerged as the winner. (Frankly, I wouldn’t be surprised if seared won just because people can get weird about eating raw seafood that isn’t sushi.)

Either way, this is not a shabby way to use a pound of scallops, and I think that even Fabio himself would be hard-pressed to disagree. 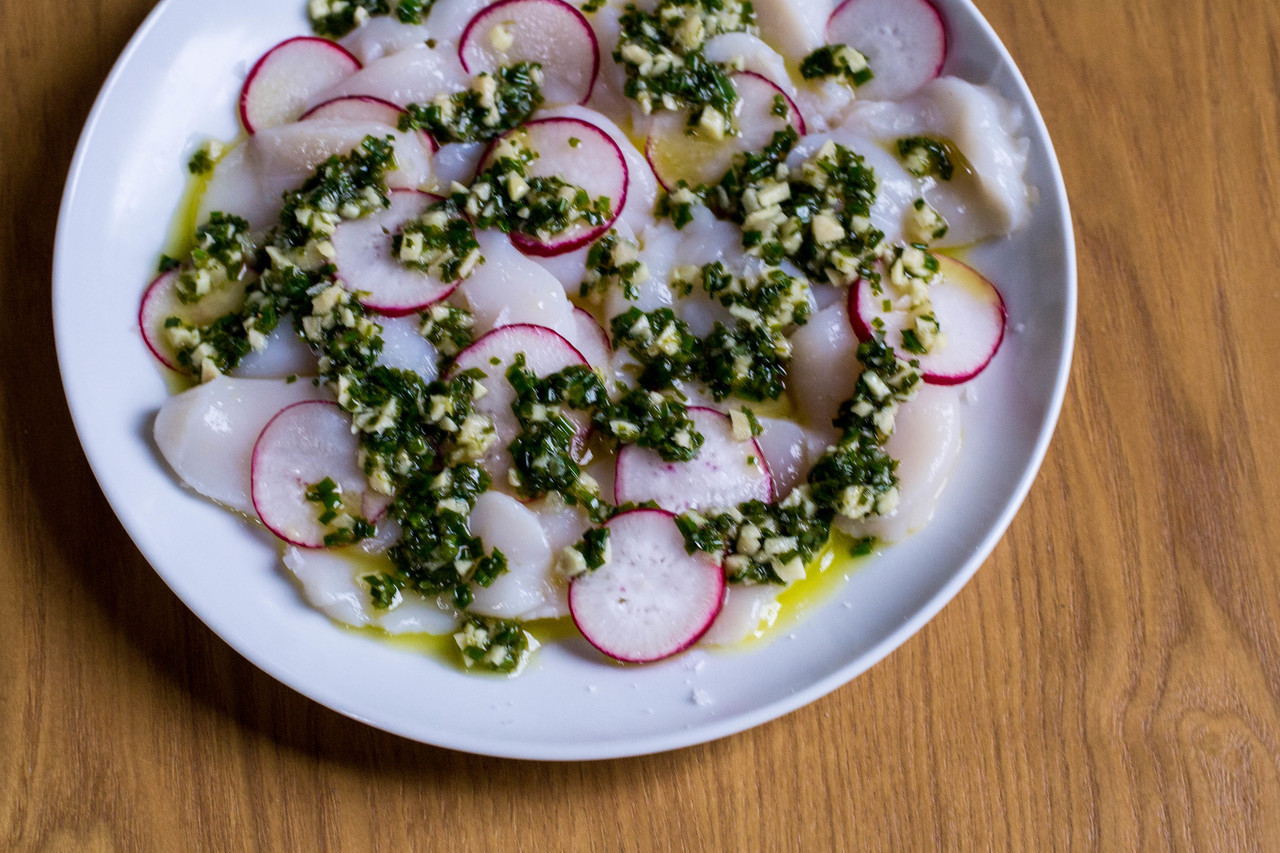 Make the ginger-chive pesto: combine the chives, ginger, ½ cup of olive oil, and lime juice into a bowl and whisk to combine. Season with kosher salt and pepper to taste and set aside.

Make the carpaccio: slice half of the scallops crosswise, each yielding 3-4 slices. Arrange the scallops on a large, chilled plate with the radishes, and drizzle half of the ginger-chive pesto over and around the plate. Drizzle with extra virgin olive oil and season with flaky sea salt and serve immediately.

Make the seared scallops: in a 10-inch nonstick pan, heat the two tablespoons of olive oil. Add the scallops to the pan and sear for about 2 minutes per side, until a crust forms on each side while the center remains rare. Arrange the scallops on a plate with the remaining pesto, season each scallop with flaky sea salt, and serve immediately.