I have a few pots of rosemary in my windowsill herb garden, in part because my first pot of rosemary seemingly took forever to grow. (Granted, I didn’t help this by putting the pot in partial shade initially and so I had to replace some of the original rosemary with newer plants.) All of my rosemary plants now sit in our bedroom which seems to get some of the most intense sun of the three rooms with windows, and as such all of them have thrived considerably. That original pot of rosemary has positively flourished, and in an effort to use some of the bounty I’ve been trying to think of ways to incorporate rosemary into my dishes as of late. This becomes problematic when you’re trying to avoid heating things on the stove, because rosemary is definitely one of those things that benefits from simmering in a sauce or a braise or similar, but after a particularly nasty heatwave finally broke I decided to treat myself to a solo meal of fresh pasta and a burst cherry tomato sauce. 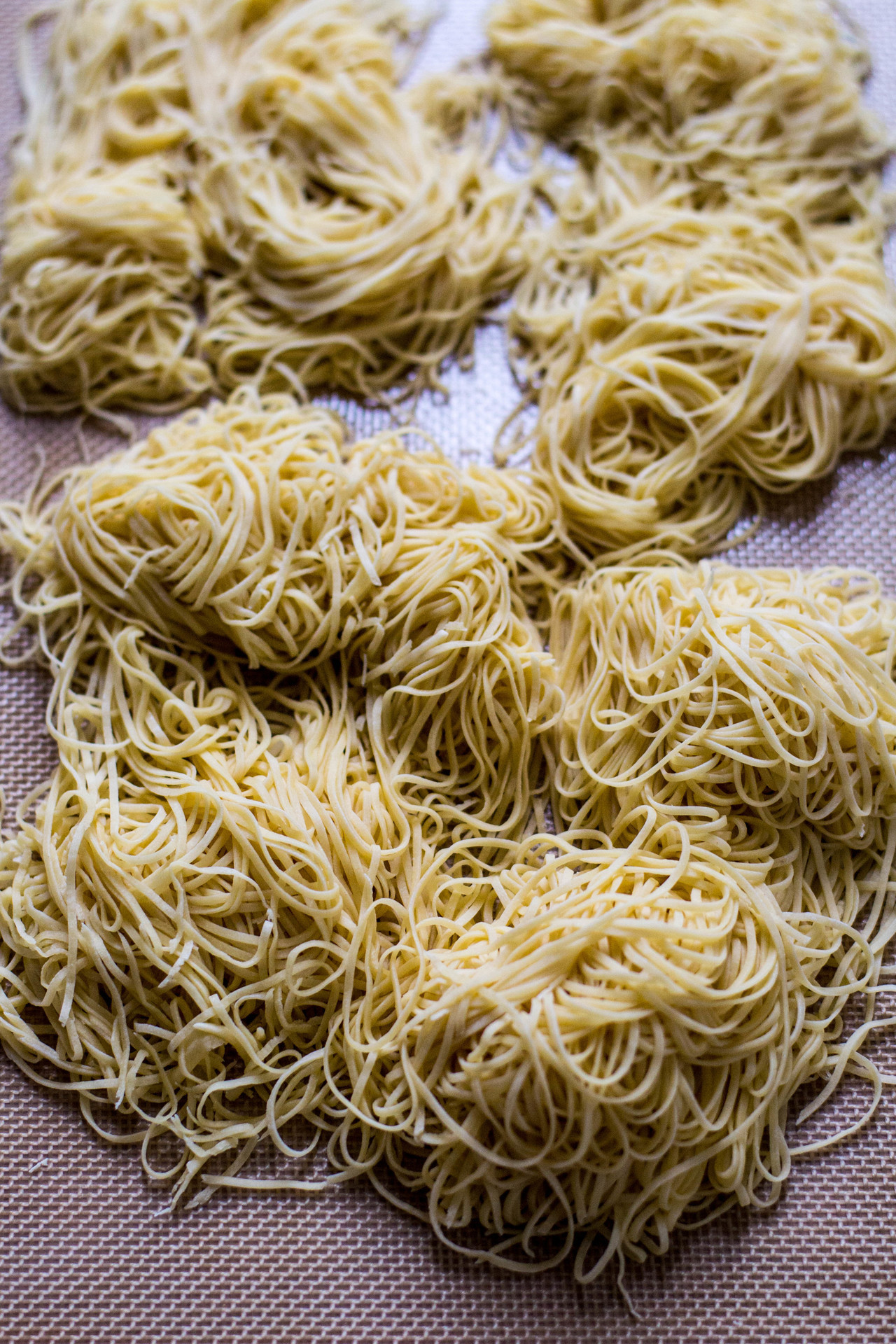 The recipe from where this originated was Gail Simmons’ Bringing it Home, a cookbook that consistently impresses me with every recipe I try in it. I’ve been meaning to make it for ages, but I’d get distracted by things like making other pastas or avoiding pasta altogether because it was too damn hot to even consider boiling water. The only ingredients I didn’t have on hand were fresh basil and parsley. My basil plant isn’t doing well, and for once I didn’t have a bunch of parsley in the fridge, so I pivoted to just using rosemary to see how well that worked. The result, I’m pleased to say, was positive indeed; minced finely, it added the desired herbaceousness without overpowering the tomatoes and when I stirred in the peppered ricotta cheese, everything melded together very nicely.

Until it gets a little cooler to make Michael’s rosemary chicken thigh recipe, a quick-cook tomato sauce will have to serve as a way to use up my vast quantity of one of my favorite herbs. 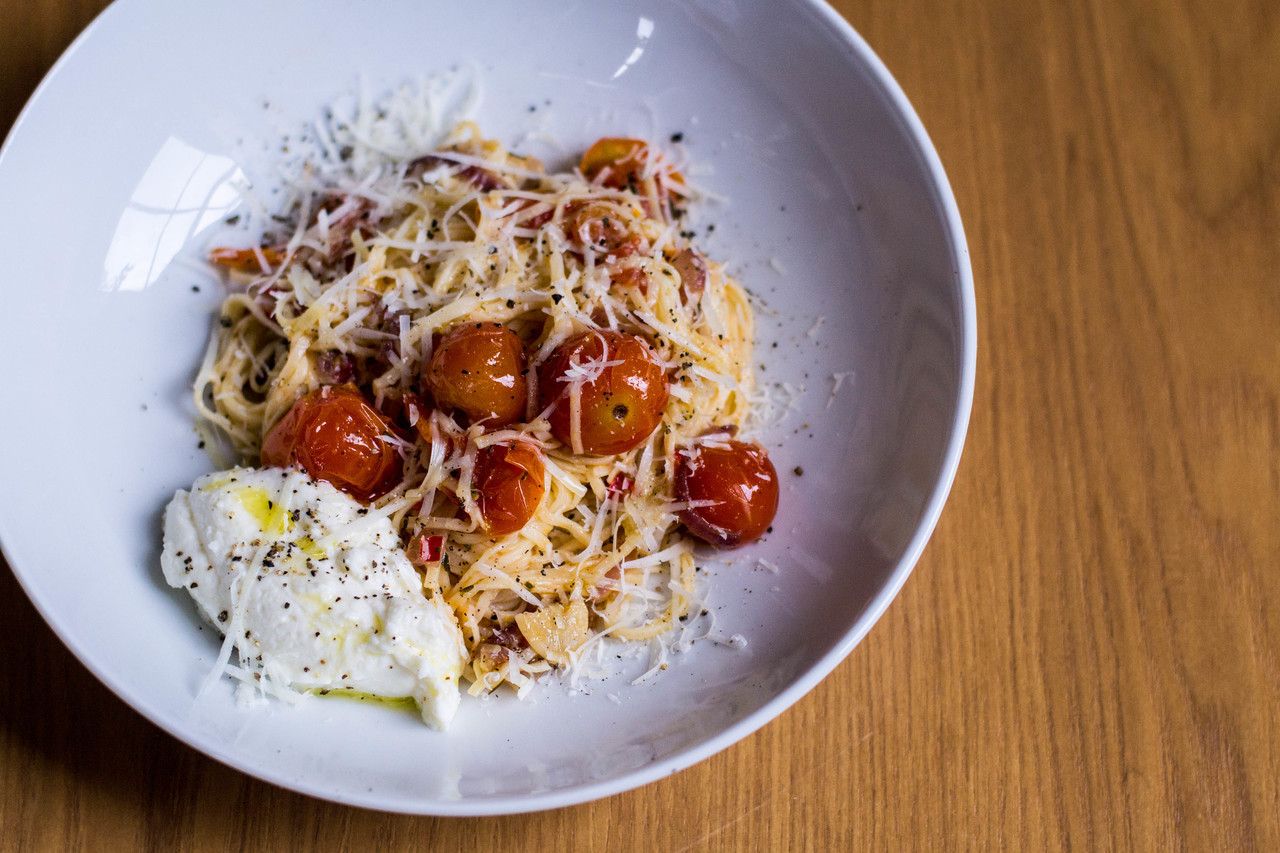 Make the pasta dough: combine the flours in a bowl and mix well, before pouring them onto a cutting board and making a well. Crack the two eggs into the well, add the olive oil, and start whisking the eggs, slowly incorporating the flour until a dough forms. (Note: you may need to use a little water, a tablespoon at a time, to help this process.) Once the dough has been formed, knead it until it’s a smooth ball, wrap in cling film, and let rest for at least 30 minutes before rolling it out. When you’re ready to roll, let the dough sit for ten minutes to let it come to room temperature.

Roll out the pasta: cut a small piece of dough off the ball, covering the rest, and start rolling it out with a pasta machine. Roll the dough through three times on the widest setting, and then roll once through each higher setting until the desired thinness. (On my Atlas machine, I rolled it out to 7.) Switch the handle to the thinner cutter option and cut the pasta, draping it on a drying rack or silicone pat and repeat with the rest of the dough.

Make the sauce: bring a large pot of water to boil; when boiling, add about a tablespoon of kosher salt to the pot and then reduce to simmer until ready to cook. In a large, 12-inch saucepan, warm the olive oil over medium-high heat and then add the garlic and onions with a teaspoon of salt and cook until the onions have become soft, about five minutes. Add the minced pepper, tomatoes, and rosemary, stir well to combine, and cook for another 6 minutes until the tomatoes start to burst, stirring frequently. Bring the water back up to boil.

Finish the dish: After the six minutes, drop the pasta into the water, letting it cook until the pasta begins to float, about 2 minutes. During this time grab a mug and collect about a cup of pasta water, and then drain the pasta when al dente before adding it into the pan with the sauce. Use the pasta water to help meld the pasta and tomato sauce, lowering the heat if necessary. When ready to serve, divide the pasta among bowls and serve each with a sprinkling of grated cheese and a spoonful of ricotta cheese. Season generously with the black pepper and a drizzle of olive oil, and serve immediately.