I mentioned in an earlier post that I was never expecting to fall in love with Miami during our travels there this past spring, but fall in love with it I did. The moment that kicked my excitement into high gear can be pinpointed back to when we made it onto the Julia Tuttle Causeway, one of three that connects the peninsula with the barrier island that is Miami Beach. The sky and the ocean were both the perfect shades of blue and as the skyscrapers of downtown Miami faded into the background I finally realized how big the city is. I found myself suddenly very eager to change out of our wintery travel clothes as soon as we got to our hotel and start exploring properly.

By the time we arrived at The Gates it was just about lunchtime and we were both fairly hungry after a long morning of travel. Not wanting to make a long trek to get food–we weren’t exactly acclimated to temperatures in the mid-80s just yet–I punted and looked up some closer places. Google directed me to The Sandbox, a Tom Colicchio-conceived restaurant concept that he’s since ceded control of, but still bears much of his aesthetic and culinary influence at the 1 Hotel.

It’s a bit confusing on how to get there–you have to go up to the third floor and let yourself in via gates that presumably are meant to keep non-guests out, but are completely ineffective in doing so–but once we sat down and took a look at the view, I finally felt myself fully relaxing. To paraphrase one of my favorite Anthony Bourdain lines: Life, at that moment, did not suck.

It got even better when we ordered a round of drinks and some food. Suddenly feeling the heat very much we kept our food on the lighter side–gazpacho, octopus salad, and a few chicken empanadas–and I ended up ordering my first frozen drink in a very long time, the 1SB Frozen Aperol Spritz. From the moment I took my first sip, I think that’s when I knew that I would be very happy to spend the next few days here. 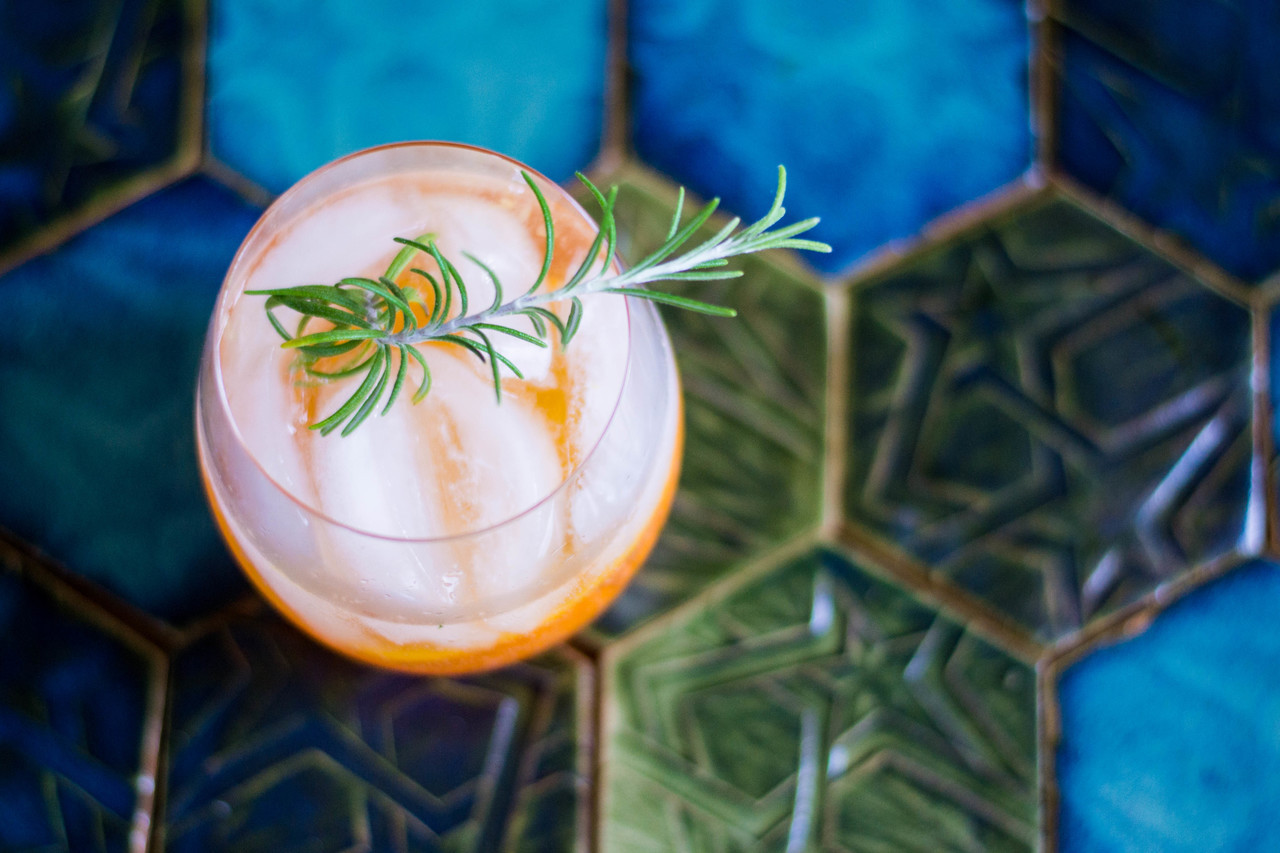 The drink itself is not a traditional spritz by any means; not only does it contain gin, but it also has passion fruit in it (because seemingly every drink in Miami has passion fruit involved in some way). The drinks are constantly churning behind the bar, meaning that the texture of the drink is a perfect consistency which makes it easier to sip more slowly and savor the experience. Naturally, I vowed to bring this drink home to our kitchen as we have a big bottle of Aperol that was an impulse purchase at duty-free when we left Barcelona last year, and this felt like a perfect way to recapture that magic. Michael expressed doubts about being able to replicate the texture using just a blender, but fool I was, I thought that I’d at least be able to make a go of it.

Unfortunately, he turned out to be right on that score. After a few mediocre attempts, I realized that there was no way to get the ice blended at the right consistency to make it a faithful recreation unless I somehow got my hands on an ice cream machine, and acquiring one of those simply to make better-frozen drinks seemed a bit much, even for me. So I gave up on that front and decided to simply make the drink like a traditional spritz, only a much tastier one.

My one regret about our time in Miami in April was that I was only able to make it to The Sandbox for that one meal. Granted, I was able to cover a lot of ground as a result, but believe me that the next time we’re in Miami Beach proper again, I’m going to head back to The Sandbox. In the meantime, at least, I can have this here in Baltimore. 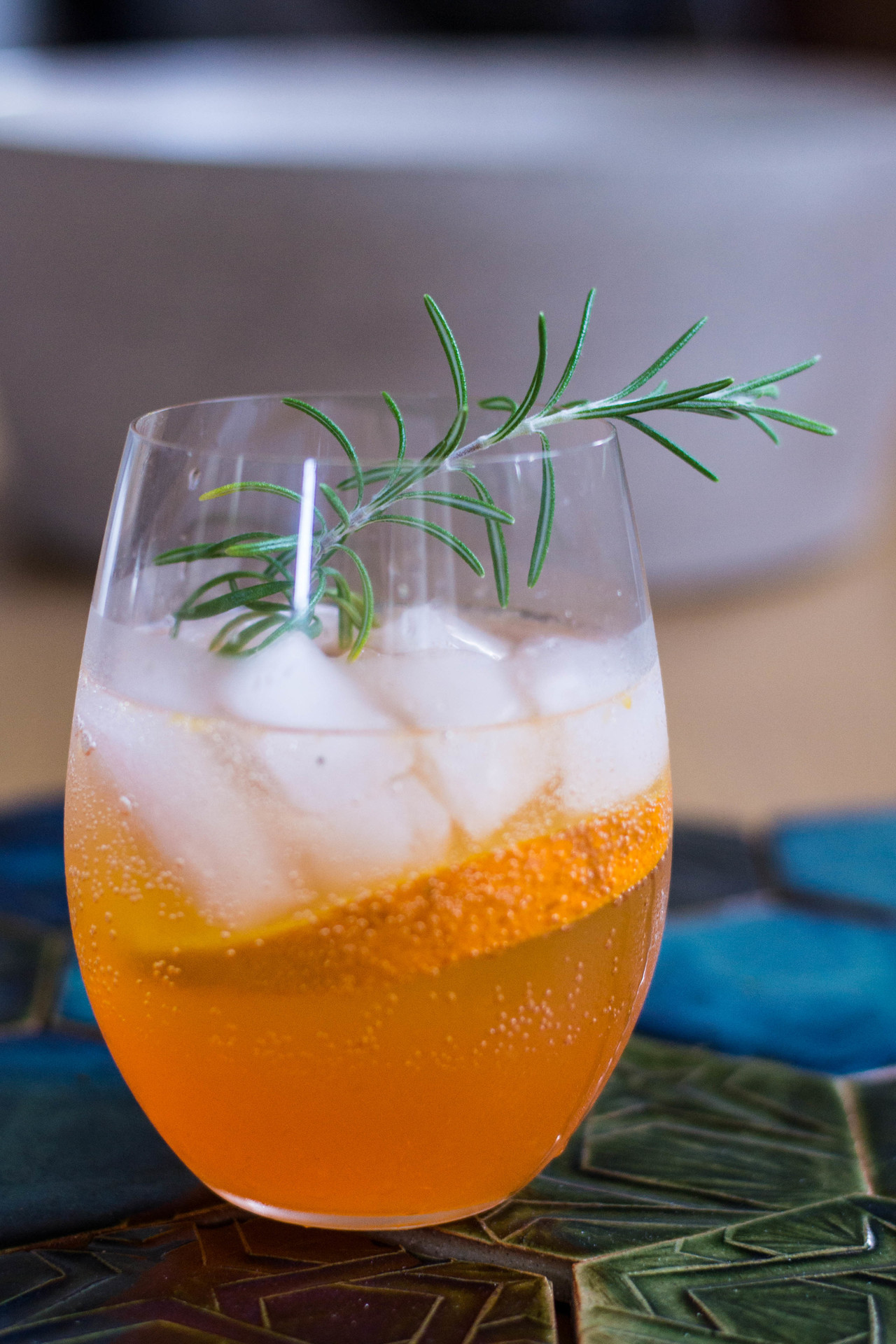 Take a cocktail shaker and fill it three-quarters full with ice. Combine all ingredients except the cava or prosecco and shake vigorously for 30 seconds or until the shaker is very cold. Strain into two glasses filled halfway with ice, and then top with chilled sparkling wine. Garnish with orange wheels and rosemary sprigs, if desired. Serve immediately.