When we lived in New Haven, we lived around the corner from the local culinary institution known as Archie Moore’s. We’d go there all the time to have some beer, eat some burgers, and shoot the shit with the bartenders. (Our US congressional representative would hold informal constituent meetings there!) They have a few other locations scattered throughout the state, but obviously, the best one is the original location.

Archie’s is known for a few things, but its most notable distinctions are its extensive collection of Coca-Cola memorabilia and its excellent take on Buffalo-style wings. They have a happy hour special that I seldom could participate in (given my hellish commute) for all-you-can-eat wings, and our friend L holds the record for the most consumed in one sitting in our friend group. They’re so good that when our buddy T came down from Boston to visit us in New York, he waited for them to open for the day and brought us a big tray of them because it had been so long since any of us had enjoyed them.

Even when they aren’t fresh out of the fryer are they still damn good, as I definitely helped myself to many of them when I got home from work that day, hours after T’s arrival. 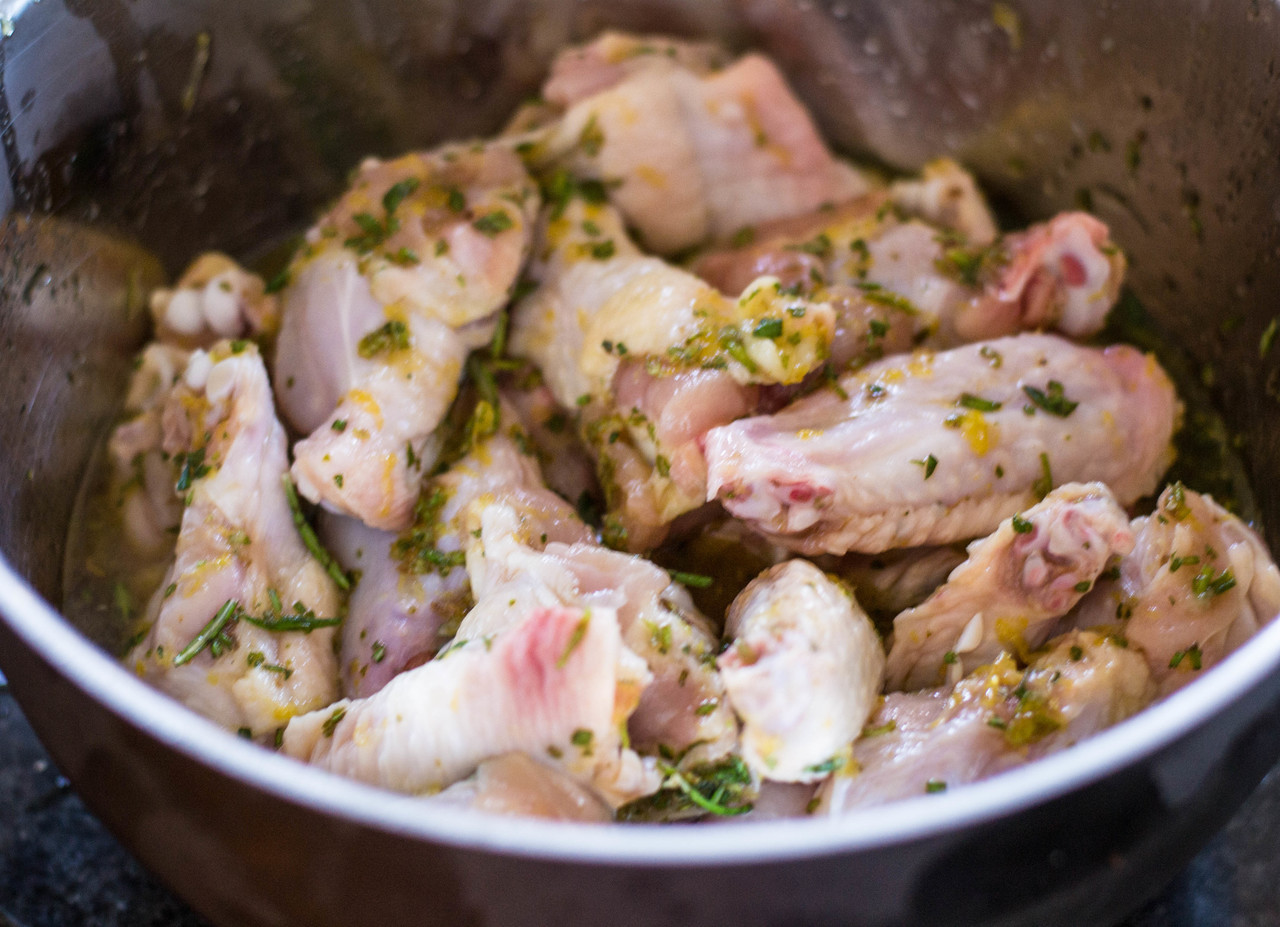 I think that Archie’s wings have kind of spoiled me on Buffalo-style wings for life, both in making them at home as well as ordering them at a restaurant. If I’m in the mood for wings I never want Buffalo-style sauce, like, ever; give me teriyaki or some garlic-based concoction any day. Earlier in the summer I shared our Spanish-style sherry and garlic wings, which are delicious and ones I encourage you to make as soon as possible, but today I want to sing the praises of a decidedly unorthodox preparation of wings: marinated in lavender, rosemary, lemon, and honey and cooked until they form a syrupy lacquer.

This comes inspired by a recipe in Rachel Khoo’s The Little Paris Kitchen in which she uses a similar marinade for a cut-up chicken that she roasts in the oven. We adapted it to be stovetop-friendly and I played around with some of the herbs a bit because I tend to prefer rosemary over thyme when it comes to chicken (and I have an enormous rosemary plant that I always look for reasons to prune). The final result makes the wings resemble a more traditionally-sauced version of the dish, but the taste is definitely unexpected. (It’s kind of like that awful episode of Pioneer Woman where she tries to trick her husband into eating “Asian Hot Wings” and he objects and demands traditional Buffalo wings, albeit without the implied racism/xenophobia.)

This is a great recipe if you’re in the mood for wings but want to try something new and different that might just trick you into thinking you’re in a bar in Provence. 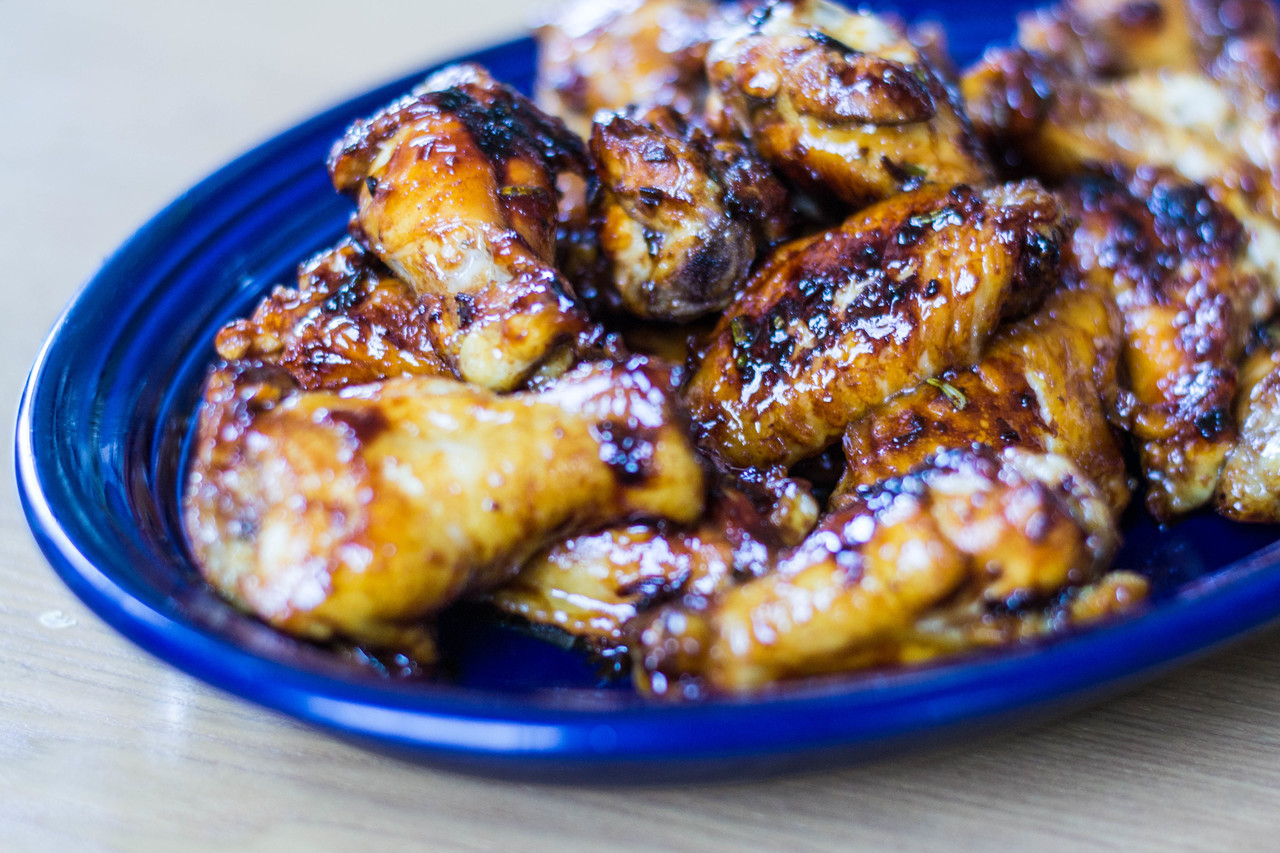 Prep the chicken wings: Using a boning or paring knife, take off the wingtips and save for another use. Separate the winglet and the drumette and place into a large bowl; set aside.

Make the marinade and apply to the chicken: If using the fresh lavender leaves (seriously, this is a good reason to grow your own), stem them and mince them. If using dried lavender flowers, crush them until fine in a mortar and pestle. Stem the rosemary sprigs and mince them as well, and then combine the lavender, rosemary, honey, four tablespoons of olive oil, lemon zest and juice and whisk well to combine. Pour over the chicken wings and use your hands to combine and mix them all well. Cover and marinate for at least 30 minutes up to four hours; an hour is ideal if you refrigerate it for a half-hour and then let the chicken come up to room temperature for another half-hour before cooking.

Cook the wings: Heat a large saute pan to medium-high heat with a tablespoon of olive oil. Add as many of the wings that will fit without crowding the pan (drizzling most of the marinade as well if they won’t fit), season with kosher salt, and cook on one side for 10 minutes before using tongs to flip them to their other side to cook for another 8 minutes (making a point to lightly season them on this side as well). Move these wings to a serving platter along with their sauce and add the additional tablespoon of olive oil and cook any remaining wings with the remaining marinade, and cook similarly. Remove from the heat, add to the serving platter, and serve.