(Hat tip to The Kitchen Witch for the rant inspiration!)

As I write this, it’s not even a full week into 2020 and Australia is burning, Puerto Rico has had a series of earthquakes (you can donate to World Central Kitchen which already has headed to Australia and Puerto Rico to help), and we might be on the brink of war with Iran because of impeachment, and naturally, the weather has been grey and/or cold and/or dreary more days than it hasn’t, and yet my social media feeds are inundated with mindless “NEW YEAR’S RESOLUTIONS HEALTH AND WELLNESS!!!!!” content and it makes me want to scream. For me, it’s not the rationale behind trends like Whole30 and Dry January and Veganaury (which I just learned about this year), because if it makes you feel better to eat more salads and fewer sweets, then I say bully for you. What irks me so about it is the expectation that everyone should be participating in some sort of fad in the name of Wellness, basically as punishment for all of the fun stuff you ate and drank from Thanksgiving through New Year’s. 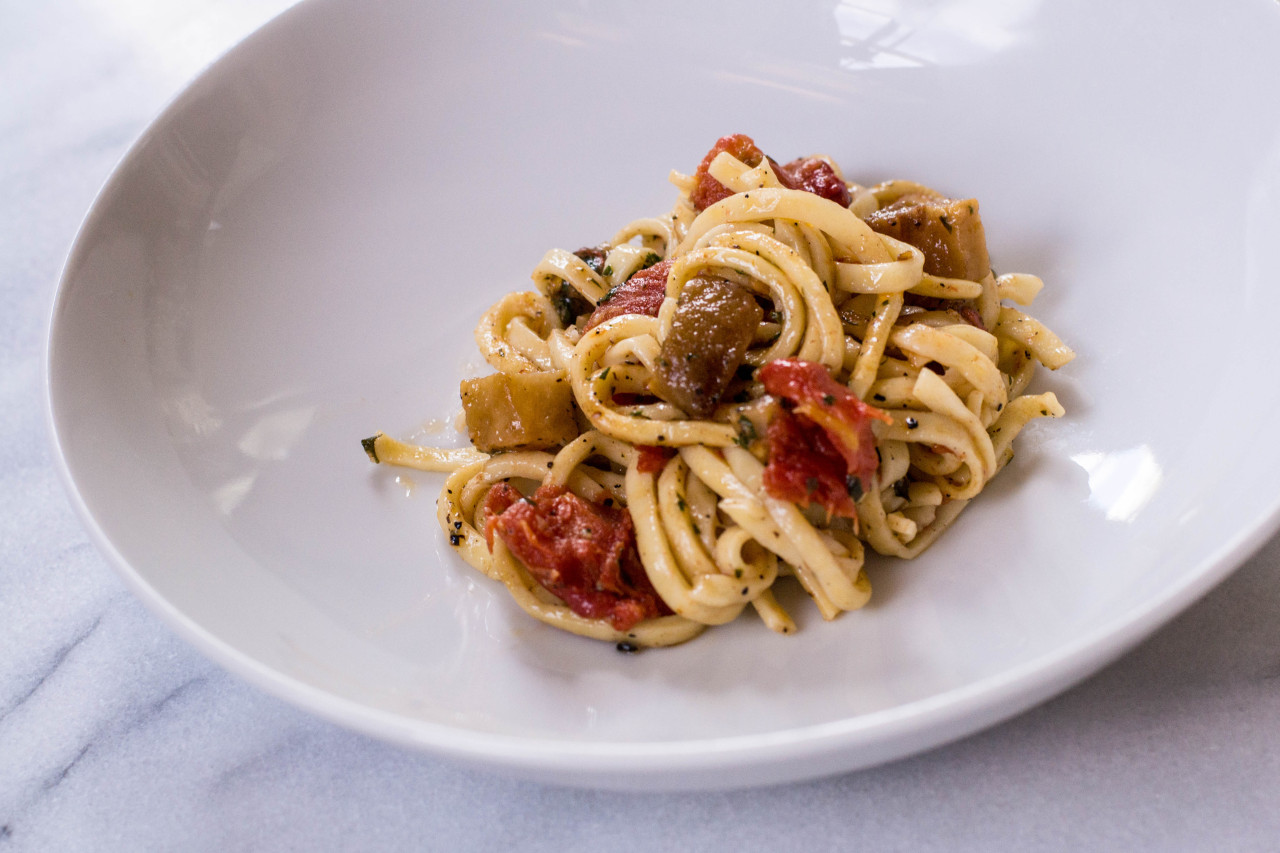 I’m not advocating that we all go completely nihilistic and eat whatever we want in whatever quantities we want, but rather that we allow for some comfort food too. The summer and early fall are when I eat the most raw food because that’s when so much great produce is available and the thought of turning a stove on is anathema to us; the winter, meanwhile, is when I want to crank on the oven and bake pizzas, make stews and soups, and have all kinds of noodle dishes. I’ll balance that by still eating salads and baked chicken thighs and the like as well, but I’m not going to abandon one of those groups in favor of the other because of weight loss. 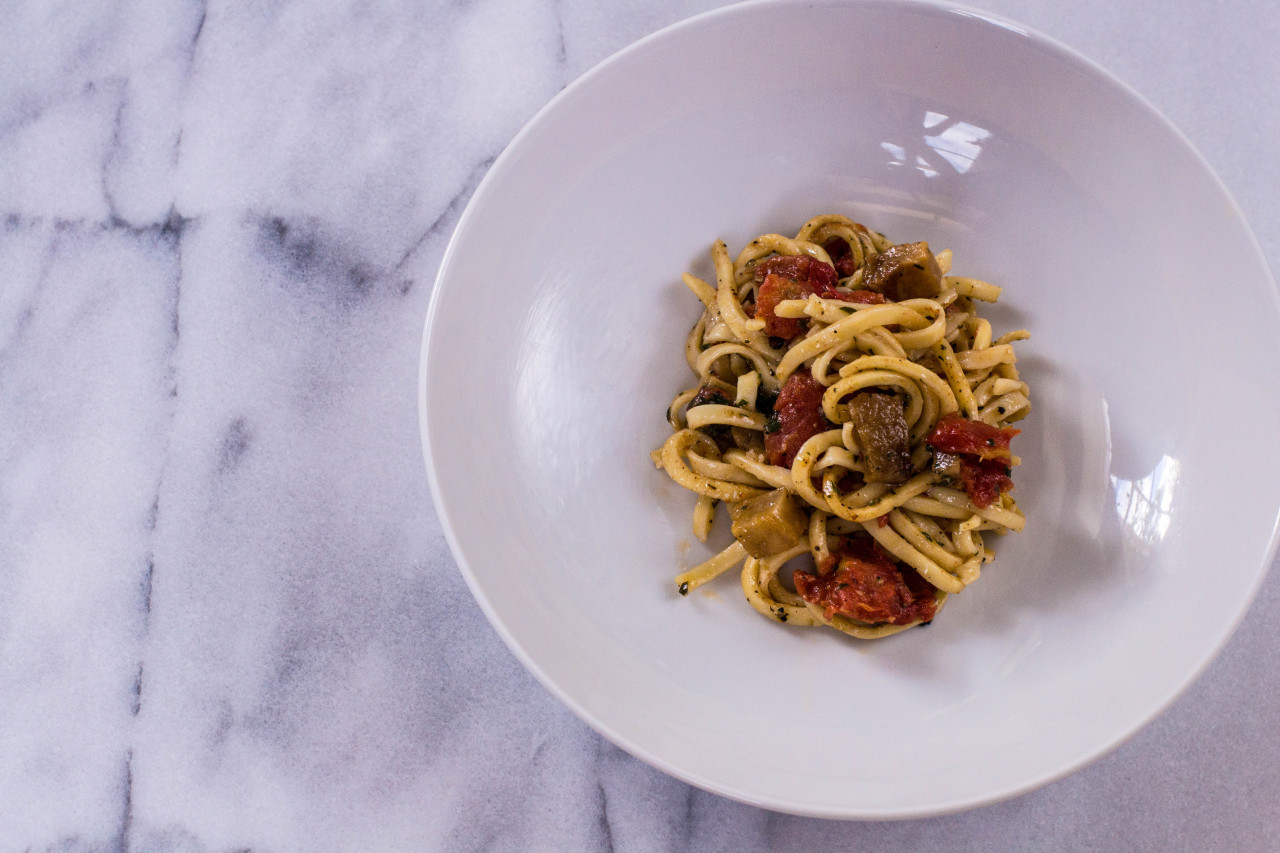 This pasta, while not the apotheosis of “clean” (ugh) eating celebrated this time of year, is the kind of dish you want when the news is crappy, the weather doubly so, and the only thing that will do is a bowl of something comforting and a favorite movie or TV show marathon. And making fresh pasta yourself is an awesome process because it’s physical and so much more satisfying than opening a box of pasta and dumping it into a pot of water.

Making this pasta, in particular, is a revelation, because it’s fast to make, relatively speaking. Once the dough comes together and has time to rest, it does not need to be rolled relatively thinly (just a 4 on a Mercato) because if you roll it any thinner, you won’t get the rounded shape that the bigoli cutter makes, but it still makes a tidy pound of pasta in short order. You can also make this by rolling out the pasta thinner and cutting it into other shapes, of course, depending on your pasta cutting interests.

The sauce by Vetri, meanwhile, blows my mind in the way that everything I make from that man does: it has the bones of a matriciana sauce with the tomatoes, pepper, guanciale, and pecorino, but he has the audacity to make it brothy by adding in three cups(!) of liquid to the party in the form of a cup of white wine and two of starchy pasta water. It means that you get a taste of cured hog jowl in every bite, and the wine adds some body to the dish that you never knew you always wanted, and the restrained use of tomatoes–even when I went rogue and used five instead of four as prescribed–means that it never feels overly saucy. Adding some brightness with parsley and creaminess from the cheese, and this is a complete meal in my eyes, the perfect to curl up with while watching anything from The Irishman or Goodfellas to episodes of Full House and The Office.

Am I saying you should make this all the time? Of course not–but this is worthy as a weekend project when your soul and your stomach could use some soothing. 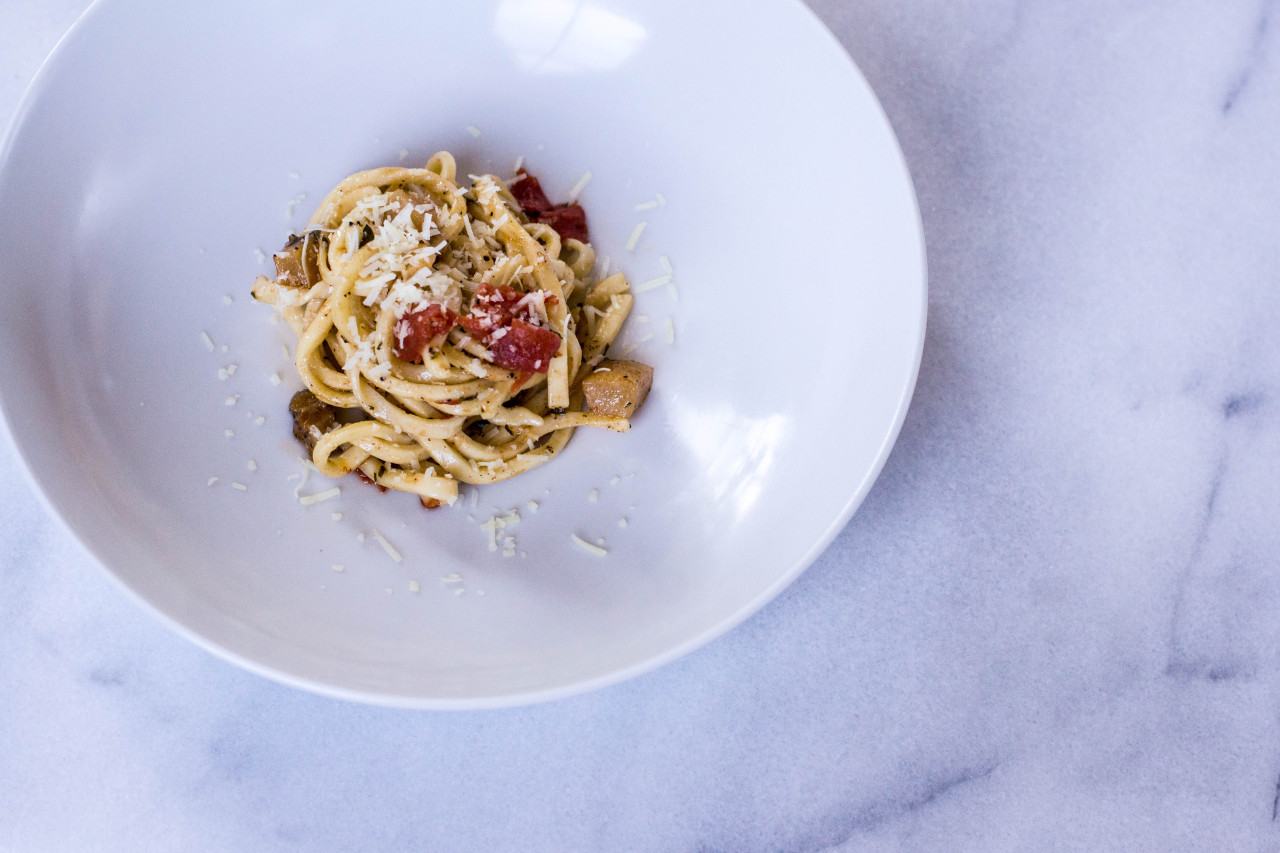 To make the pasta, place the flour on a wooden cutting board, make a well, and crack the three eggs into the center. Add the oil and salt, and whisk the eggs, slowly incorporating more flour as a dough begins to form. Use a bench scraper to then start folding the rest of the flour into the mixture; when a ball forms, use a bit of water, a tablespoon at a time, to incorporate as much flour as possible until you have a pliable dough that will bounce back when you touch it. Wrap in plastic wrap and let it sit in the fridge for at least 30 minutes. When ready to roll the pasta, let it sit on the counter for 10 minutes to allow it to come to room temperature.

When rolling the pasta, cut a small amount of dough off the ball, re-wrap the dough, and bring it over to the pasta roller set on its widest setting. Roll it through once, then fold the ends together, rotate it 90 degrees, and roll it through the widest setting again. Repeat this one more time, and then roll it through the machine, increasing by each number once, until you get a sheet approximately ⅛th of an inch thick. For my machine, this is a four, but you may have to re-roll your first piece of dough to get this right. If you have a bigoli attachment cut the dough with that, but if you don’t, you can use a knife to cut strands of about 1/8th of an inch thick if desired, or you can roll it thinner and use the fettuccine cutter if that’s preferable to you.

To make the sauce, first bring a large pot of water to boil, and then season with about a tablespoon of kosher salt. While the pasta water is coming to a boil, heat a large skillet over medium-low, and add four teaspoons of the olive oil and add the guanciale. You’ll need about 10-12 minutes to render out the fat and make the cubes nice and golden brown

Cook the pasta in salted water either to package directions if using boxed or until the pasta is just under-done if using fresh pasta, which takes about 3-4 minutes. Reserve two cups of the pasta water, and then drain the pasta and set aside.

When the guanciale or pancetta is golden brown and crispy, add the tomatoes and red pepper flakes (or use shears to cut up to chiles de árbol), break up the tomatoes with a wooden spoon or tongs, and then add the wine and the pasta water. Bring the sauce to a boil and let cook for 10 minutes, until the sauce has thickened and reduced.

To finish, add the drained pasta, 1 cup of pecorino cheese, and all of the parsley to the pot and use tongs to combine them well. Season with some salt and a good amount of freshly ground black pepper to taste, and then divide among four bowls. Serve immediately with the remainder of the cheese.