If you find yourself looking for more content to stream as we settle in for a lot of self-quarantine and social distancing, look to see if your local library gives you access to the streaming platform Kanopy. Stocked with films of all kinds–both classic and modern–as well as documentaries, there’s a treasure trove of content there including the 1996 cult classic Big Night. Starring Stanley Tucci and Tony Shaloub as brothers in the 50s at odds on what to do with their Italian restaurant, the film is sublime and filled with so much glorious food. 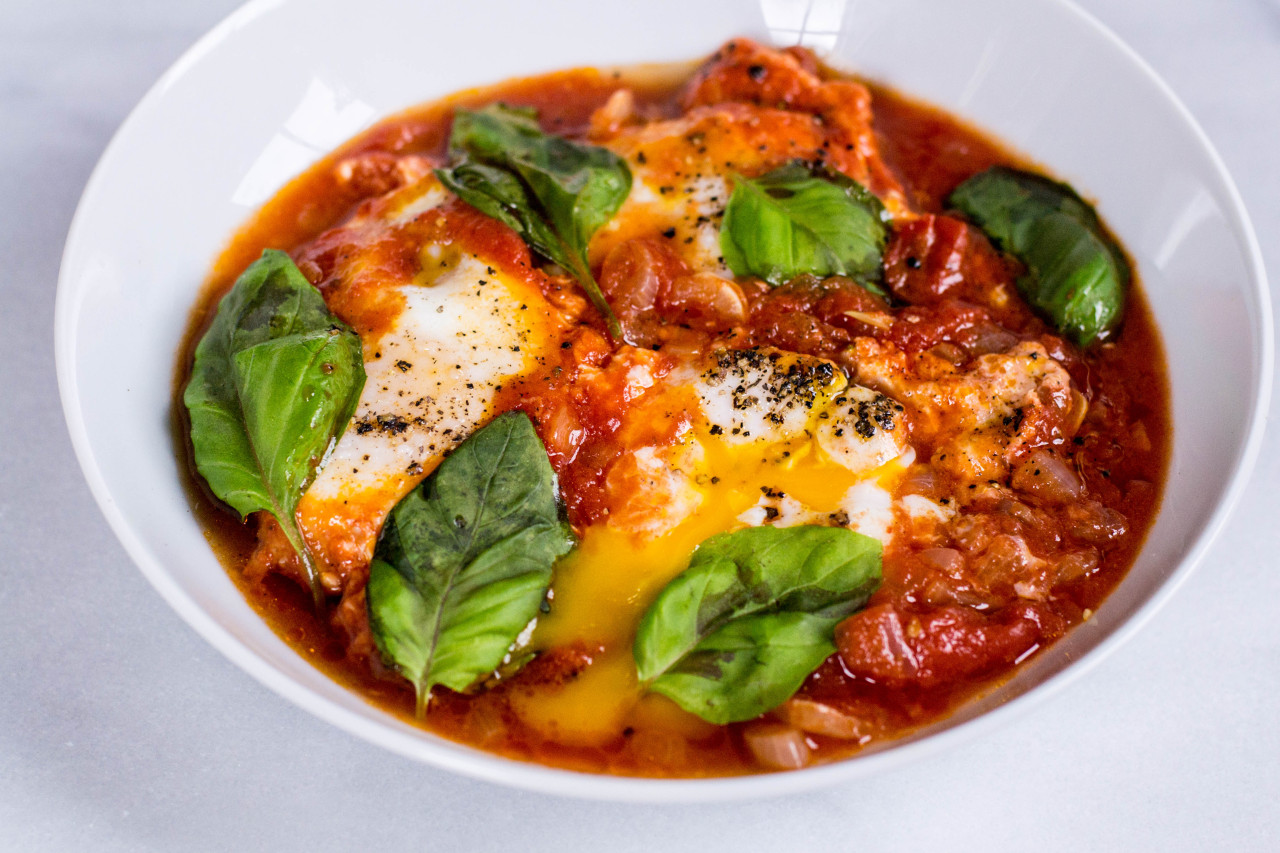 In the subsequent decades following that movie’s release, Tucci has emerged as an ardent food enthusiast, writing two cookbooks on Italian food, and to this day I don’t understand why he doesn’t have his own cooking show. It’s hardly surprising that Questlove tapped him to contribute a recipe for his Mixtape Potluck cookbook, and I kind of love that his contribution is both so straightforward and yet so comforting. 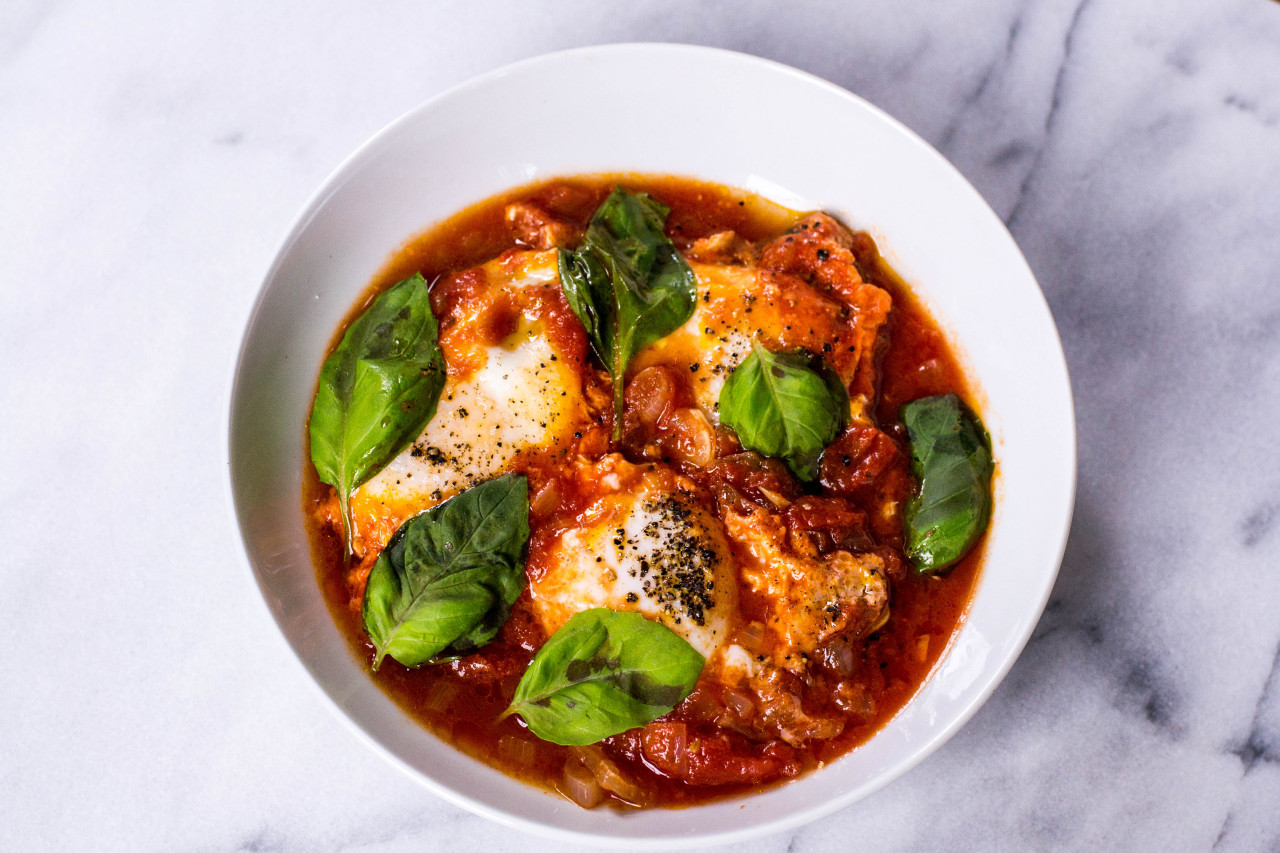 No, the irony of making eggs in purgatory right now is not lost on me, but there’s a really good reason to make it at all: it’s easy, it’s inexpensive, and it’s absurdly good. The richness of the tomato sauce and the egg yolks satisfy that need for something comforting, and it perfumes the air in the best possible way. The recipe as written is meant to serve 8-10 as a late-night snack with eight eggs, but it makes for a satisfying-yet-light dinner for a smaller group using as many eggs as you’d like to eat. As for the leftovers, I’m going to heat them up and serve them with some soft scrambled eggs for a quiet brunch.

If you don’t have access to Big Night via Kanopy, it’s also available to stream via Amazon Prime. If you’ve never seen it, see this as an opportunity to remedy that, and if you have, watch it again. You’ll thank me for it. 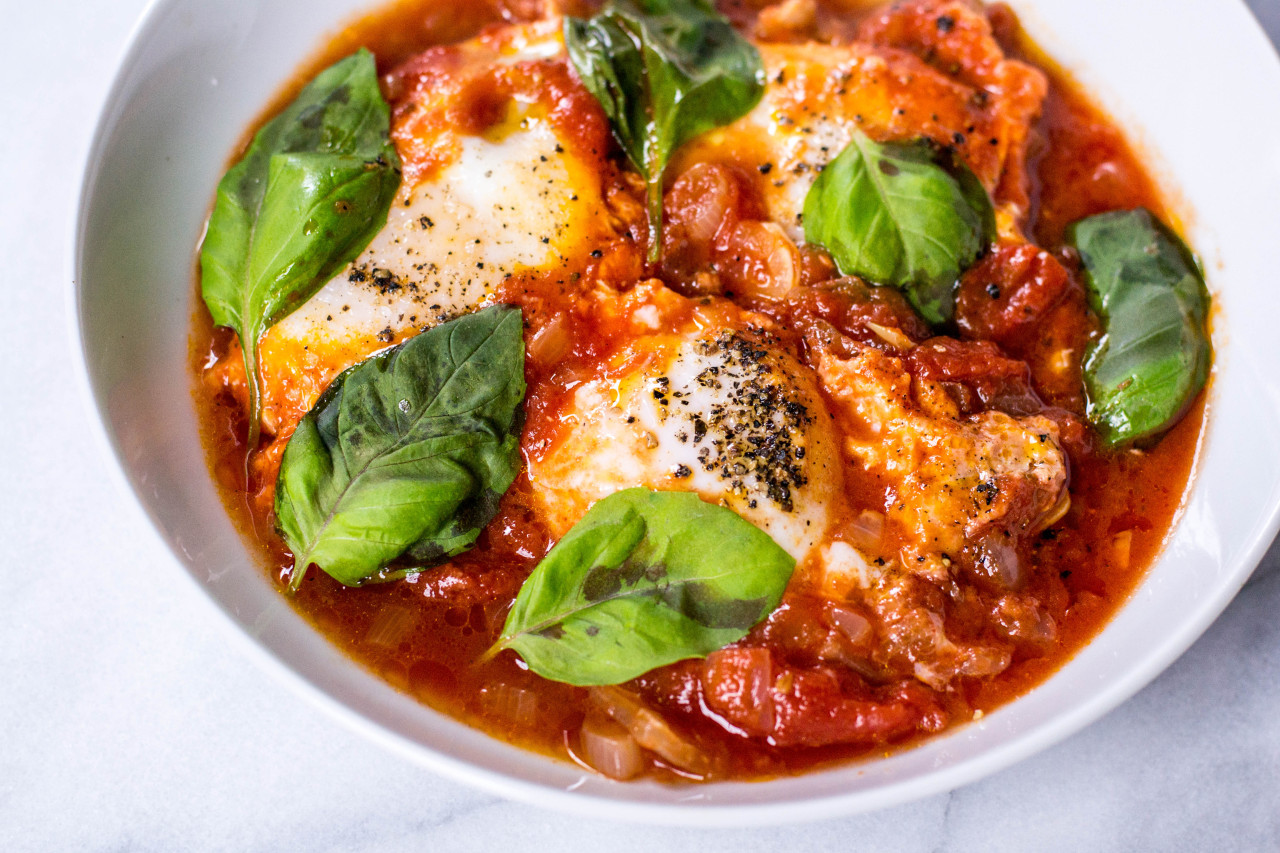 Serves 6-8 as a light snack, or 2-3 as a more substantial dinner

In a large skillet, heat the ¼ cup of olive oil on medium heat until shimmering. Add the onions and garlic and cook until they are softened, but not colored, about eight minutes. Meanwhile, empty the can of tomatoes (with their juices) into a medium-sized bowl and crush them with your hands. Add the tomatoes, a teaspoon of salt, and half of the basil leaves to the pan, bring to a boil, and cover and cook for 30 minutes.

Depending on the number of eggs you’re using, make divots into the sauce that are evenly spaced apart and add an egg to each one. Cover the pan again and cook until the whites are set but the yolks are still runny, about seven minutes.

To finish, scatter the remaining basil leaves over the top of the skillet, season another teaspoon of salt along with the pepper, and drizzle olive oil over everything. Serve with warm bread, if desired, immediately.