In a city such as San Sebastian that is so gorgeous and filled with such amazing local food, the thought of eating at a McDonald’s or a Burger King might seem a little odd, but I can understand the appeal of trying one of the regional menu items that you’d never find at your local restaurants. (I mean, I remember seeing crab cakes advertised at an Ocean City, MD location when I was a kid and finding that fairly intriguing.) Ed Lee did just this at the one McDonald’s in San Sebastian, all in the hopes of trying their pork burger. His expectations were not met, but as he points out in the headnotes for his piggy burger recipe in Smoke and Pickles, it inspired a much better dish, so I’m grateful he took one for the team.

I get cravings for burgers in fits and starts; when a burger spot opened near us in Stamford years ago, I’d get the pork burger only to be disappointed because it never was as tasty as I had hoped. When we first moved to Baltimore I basically tried all of the neighborhood burgers I could find before burning out on them and craving some lighter fare. We’ve tried the sous-vide cheeseburger from Hugh Acheson’s Sous Vide a few times now to great success, and with Lee’s pork burgers I’m firmly back on the burger bandwagon.

What makes them so good is that the burgers themselves are fairly straightforward: a mixture of ground pork, scallions, hoisin sauce, and salt and pepper. He has you form thin patties that are stackable and cook super-fast, so there’s little worry of them drying out. The other key to this burger’s success is the sun-dried tomato ketchup that he has you simmer while the burgers chill in the fridge prior to cooking. Hands-down, it’s the best homemade ketchup I’ve ever tasted. It’s super-savory from the tomatoes and fruity from the dried pasilla peppers, and when combined with the sweetness from the hoisin in the patties, it makes for a pretty tremendous burger.

Lee has several toppings for his burger, including cilantro leaves, pork cracklins, and kimchi; all of these are great, but I’m personally a fan of Michael’s hot sauce pickles on my burger. Michael did top his burger with kimchi from Hmart and proclaimed it delicious.

My favorite part of all about this burger is that the ingredients are relatively seasonally agnostic making it something I can enjoy all year long. 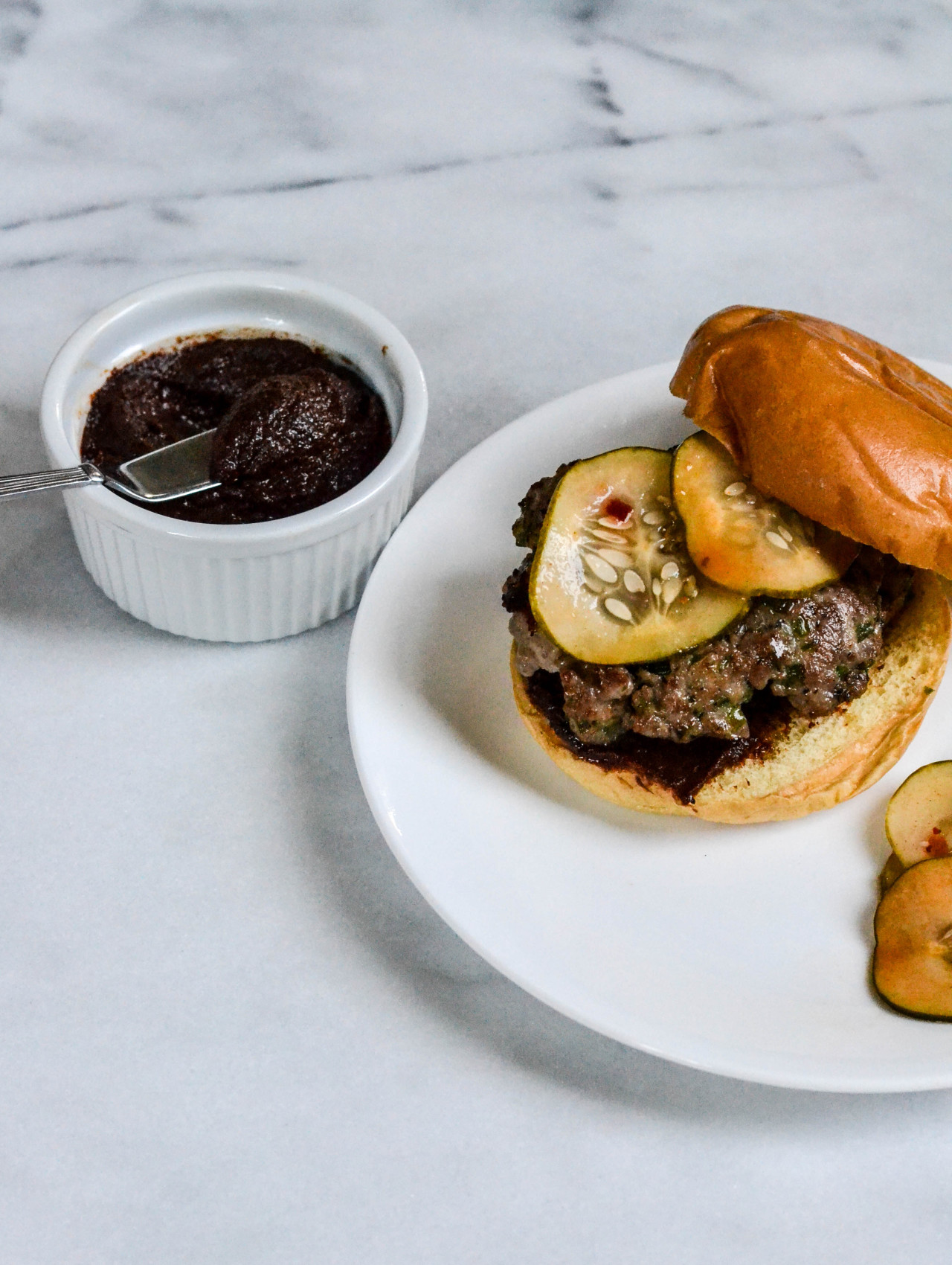 To make the burgers, combine the pork, scallions, hoisin sauce, salt, and pepper into a medium bowl and use clean hands to combine. Form thin patties of about two ounces each, and place the first four patties on a plate. Cover the patties with plastic wrap, then form four more patties and place them on top and cover them with plastic wrap. Refrigerate for at least 30 minutes before cooking.

To make the ketchup, combine everything but the water into a saucepan and bring to a simmer, cover, and cook for 15 minutes. Remove from the heat and let cool, and then add to a blender and using the water bit by bit, blend the ketchup until it’s a smooth puree. (You may need only some or all of the water to do this; just don’t put it all in at once.)

To cook the burgers, heat a tablespoon of the peanut oil or bacon fat on a cast iron or steel carbon plan on medium, and place four of the patties on the pan. Cook for two minutes, flip them over and cook for a minute more.

To make the burgers, spread some of the ketchup on the bottom half of the bun. Place the first patty on the bun, spread more ketchup on the top of the patty, add the next patty, and spread a little more ketchup. Top with cilantro, pickles, kimchi, and/or cracklins and serve immediately.