If you’ve read here with any regularity over the last few years, you may have noticed that while we are big into fish and seafood, salmon does not make regular appearances here on the blog, save for a mention of the smoked stuff you can get at Russ & Daughters or Zabar’s. The reason for that is a fairly simple one: during our time in New York, we struggled to find anything other than farmed Atlantic salmon…and to be honest, I’m really not a fan of the stuff. It’s too strong, too fishy and not terribly sustainable; while fine as an occasional indulgence when I buy it smoked, it’s too much for me to eat when it’s baked or grilled.

When we lived in New Haven, our fishmonger at the Stop & Shop introduced us to the delicacy that is Alaskan salmon: wild-caught, environmentally friendly, and still replete with the omega-3 fatty acids that we’re all encouraged to get our fill of, both Michael and I were hooked on it. Then we moved to New York and couldn’t find it anywhere. We knew it was seasonal, but we kept watching the Fairway fish counter for signs of it and had absolutely no luck.

Well, this summer will be drastically different from the last, because in the midst of all of the moving and traveling insanity that has been the last two and a half months for us, the nice people at Copper River Salmon contacted us and asked if we’d like to be ambassadors for the New York metro area in reporting on where you can find Alaskan salmon both in-store and in local restaurants. For our troubles they will be sending us two pounds of various salmon varieties–King, Sockeye, and Coho–and we’re going to be trying out some new recipes that I’ve kept on the back burner until I could get my hands on the salmon I liked.

We’ll update this page on a regular basis (as we’re often on the lookout for fish on the weekends during the summertime anyway) with local deals and where you can find them, as well as noting any particularly interesting dishes we see as we explore our new city’s restaurant scene.

(In case it’s not clear, in the spirit of full disclosure, CR/PWS Marketing Association is sending us a monthly shipment of salmon over the summer as part of this promotion.)

One of the things I love about shopping at the Stamford Fairway is that they send out circulars and tend to have really good in-store specials, at least compared to the New York stores. And oh, look what was on the front page of this past weekend’s circular: 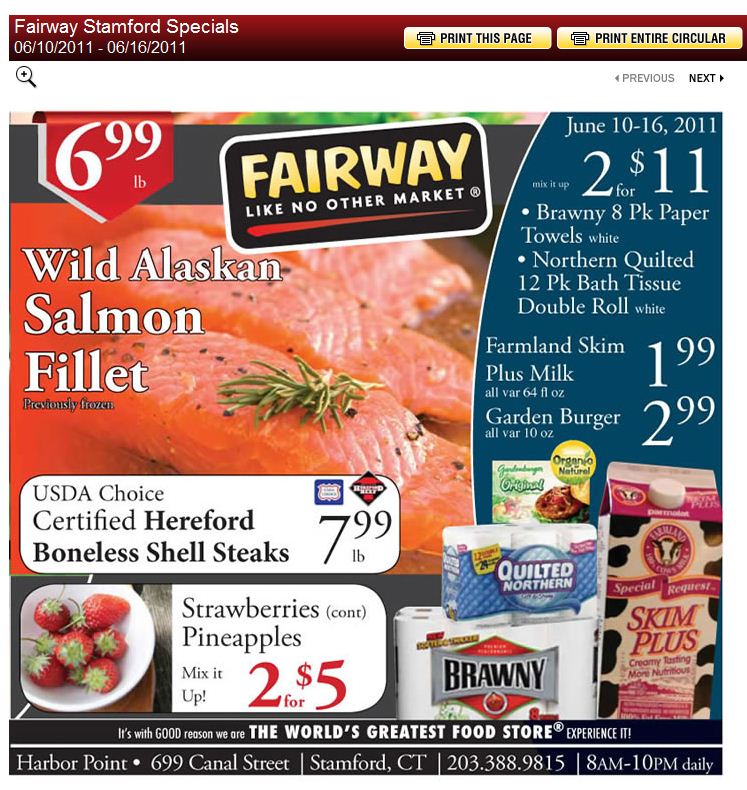 So $6.99/lb is probably the best price I’ve seen for this particular type of fish…ever. While this deal is good through 6/16, I have a feeling that Fairway will be popping up with some regularity over the summer with similar deals.

Compared to Fairway, Stop & Shop is not featuring the sockeye they are carrying quite so prominently, and the price isn’t quite as low, but it is easier to get to a S&S than it is to trudge down to Fairway–at least during rush hour. I kind of made that mistake when I asked Michael to pick up an ingredient that somehow hadn’t made it home with us over the weekend and a good half hour later he returned home. Whoops.

If you can’t run out to the store to get some and you live within the delivery area, you have a few online options as well.  First up–Fresh Direct:

Fresh Direct does a great job of providing information on seafood, and it seems like every time I land on the site there’s more information to be found–and it’s interesting to note that of the places I’ve checked out so far, they are the ones calling out Copper River salmon by name. And while they aren’t usually the lowest price in town, they are convenient and are very upfront about the quality of every product they are selling that day.

Peapod is also carrying Alaskan Sockeye right now (at the same price as what you’d get from Stop & Shop), but they do not provide nearly as much detailed information, something that I wish they would. One of the great things about the Stop & Shop we went to regularly in Hamden was that our fishmonger was always very helpful and knowledgable about the product he was selling, and would go out of his way to get you what you needed, whether it was a recipe recommendation or going to the back to get you a frozen piece of fish so you could store it at home, and from the limited amount of time I’ve spent on this site I get the impression that this is a more utilitarian site: you go on, get what you normally get in-store, and get it delivered.

Come back here often for updates and (hopefully) some inspiration!

Our first foray into slicing into our salmon: Wild Salmon Paillards with Sweet-and-Sour Shallots

Fairway has reverted back to a $17.99/lb price for their wild Alaskan Sockeye salmon, and Stop & Shop/Peapod also has it at full price at $19.99/lb. This is likely due to it being Father’s Day weekend and therefore the specials will revolve around red meats rather than fish, which, according to Ron Swanson (of Parks & Recreation), is practically a vegetable.

But two stores in my area are featuring…an Alaskan salmon on special. It’s not a variety I’ve ever seen, however, so I don’t know what to make of it:

Is anyone familiar with this particular variety?