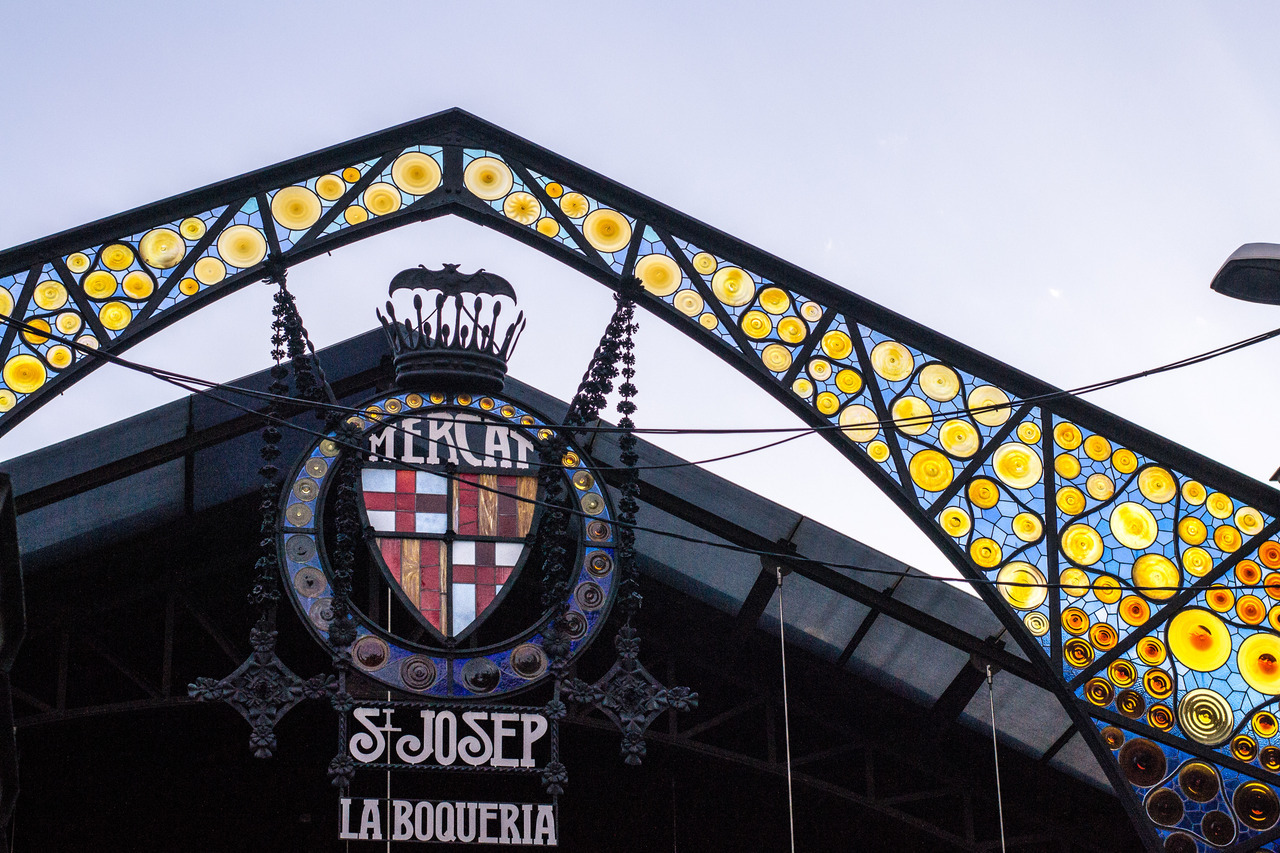 Barcelona, hands-down, is my favorite city to visit in the world, and one of my favorite places to research because it seems like there’s always something new and interesting to find there.

In writing this, though, I have to give a lot of props to the awesome people at Barcelona Wine Bar/Barteca Group, as their excellent guide to Spain was one of my main starting points for planning our first trip to Barcelona back in 2012, and it’s been something I’ve enthusiastically endorsed and sent to friends when they asked for suggestions. Not only does it have solid restaurant and bar recommendations, but they also include hotels, wineries, and other activities to do while you’re in the country. It’s encouraged me to really explore the city as a result and encouraged us to find some gems of our own along the way. 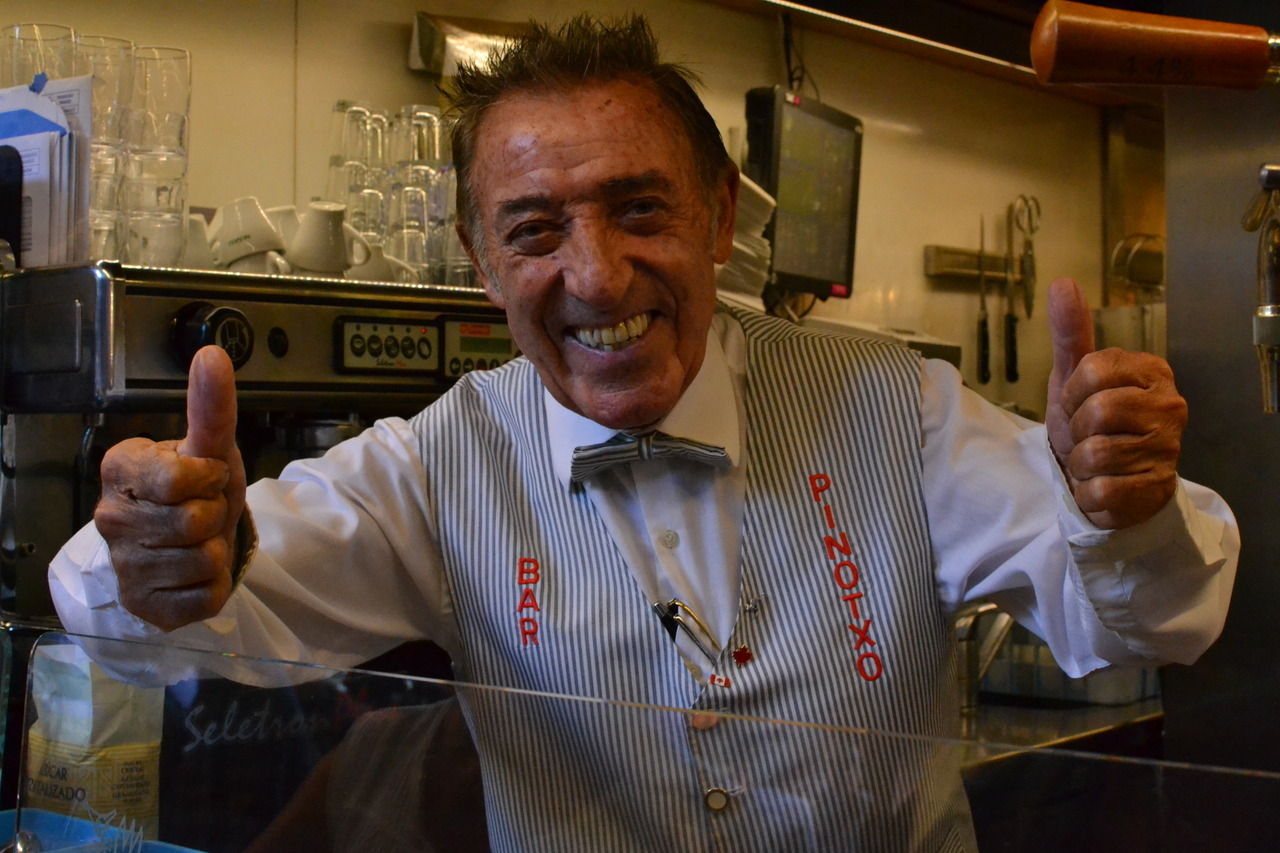 Bar Pinotxo
This place is an institution within the institution that is La Boqueria, and it deserves that distinction. Go there early if you can, to get the breakfast—you’ll be thankful you did. One of their signature dishes is chickpeas with morcilla sausage, and while it’s not necessarily the most traditional of breakfast foods, it’s completely sublime and it makes me want to order blood sausage from Despaña so I can try to make it at home for myself. The one thing I cannot recreate at home, however, is the service from their world-renowned bartender Juanito Bayen who is still serving plates and pouring glasses of cava to this day. He’s always game for a photo (in his signature pose as shown above), and if he serves you, just ask him what’s good and place your culinary fate in his hands. You won’t be disappointed. 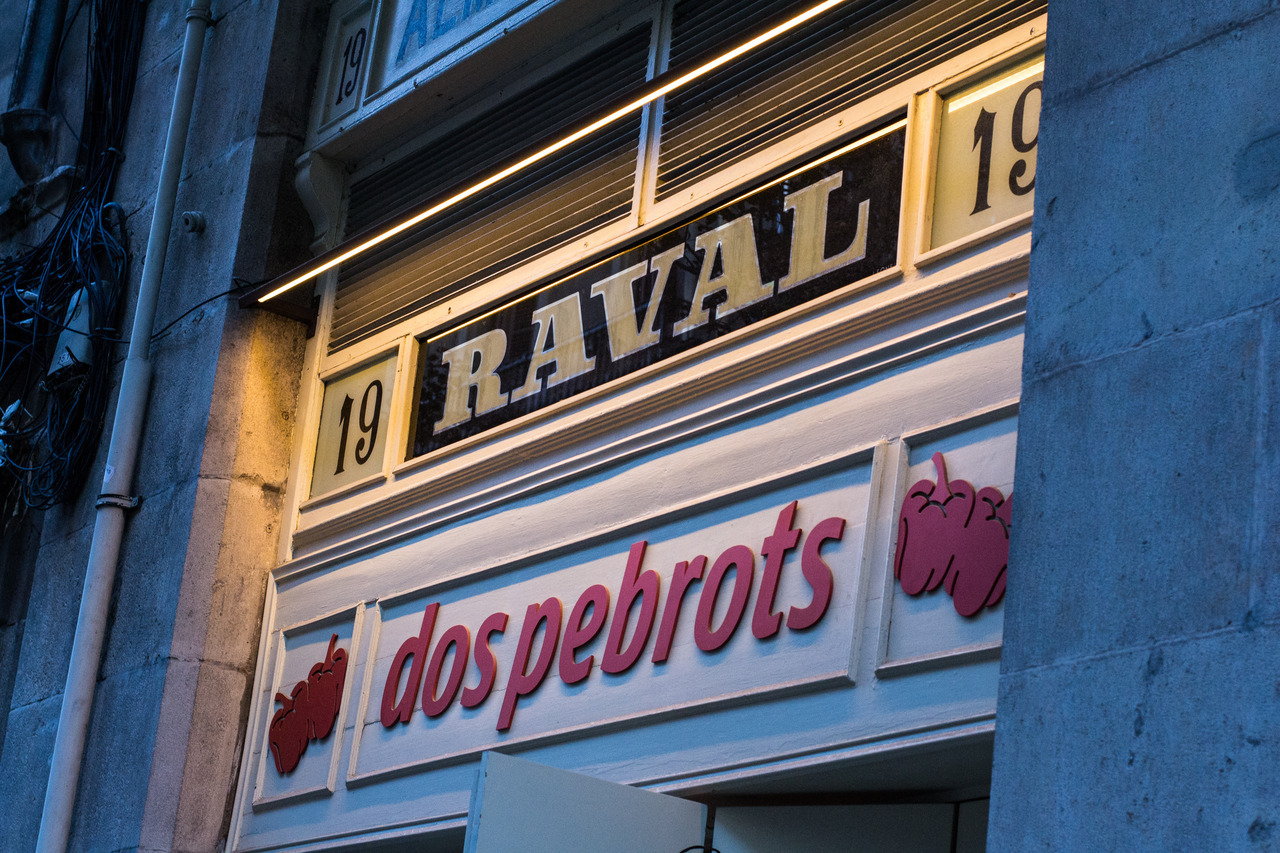 Dos Pebrots
I’ve written about our meal here at length, but the TL;DR version is that this is a Michelin-caliber spot in the Raval neighborhood that presents itself as a tapas meal wrapped in lots of culinary history. I’d like to think that someone on Albert Raurich’s team (if not the man himself) watched Good Eats and thought it would be a fun idea to turn into a restaurant concept. Each dish has a history behind it in addition to specific utensils, and the waitstaff is well-equipped to tell you the story behind each one. Lest you think that it’s all for show, the food is phenomenal, and shockingly not expensive. Our dinner of seven tapas came to 110 euros, INCLUDING WINE AND BEER. If that’s not a reason to go here, nothing else would be. 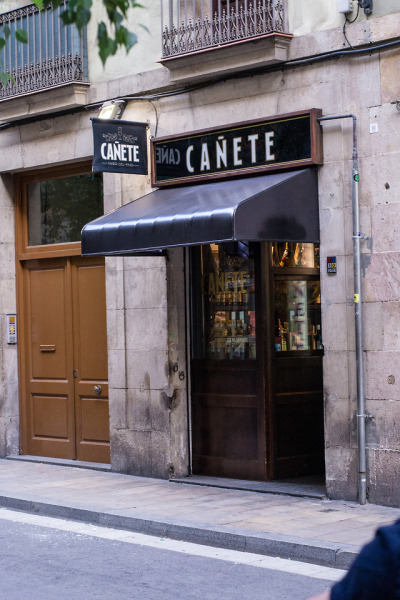 Bar Cañete
It took us several tries to get into this very small, very crowded tapas bar, but I will say that our patience was rewarded. I found out about this place from a Conde Nast Traveler article, and you could tell that everyone there also likely found out about it that way as you could hear a lot of English being spoken. But that didn’t stop me from enjoying the hell out of our tapas that we had while we were there: the squid sandwich was a particular favorite, as was the gazpacho. It was incredibly thick and creamy, clearly made with a healthy amount of high-quality extra-virgin olive oil, and it’s inspired me to try something similar when I’ve made gazpacho at home since then. This place was definitely on the more splurge-y side of the places we’ve visited, but between the ambiance and the food, I felt it was definitely worth the Euros.

Ølgod
Craft beer is not something I strongly associate with Barcelona, but it turns out that there are places to get great beer! Ølgod is located right around the corner from the Barcelo Raval, and we made a few visits there on our last trip to the city. The first was for a beer as the kitchen wasn’t open at the time, but we came back for dinner and treated ourselves to a meal of decidedly not-Spanish food. The beer selection here is solid, but what really surprised me was the quality of the cocktails we had. Ølgod could easily exist in our neighborhood here in Baltimore as it did across the Atlantic, and I’m bummed that it doesn’t, to be honest. It would be the perfect place to grab a low-key brunch on a lazy Sunday afternoon. 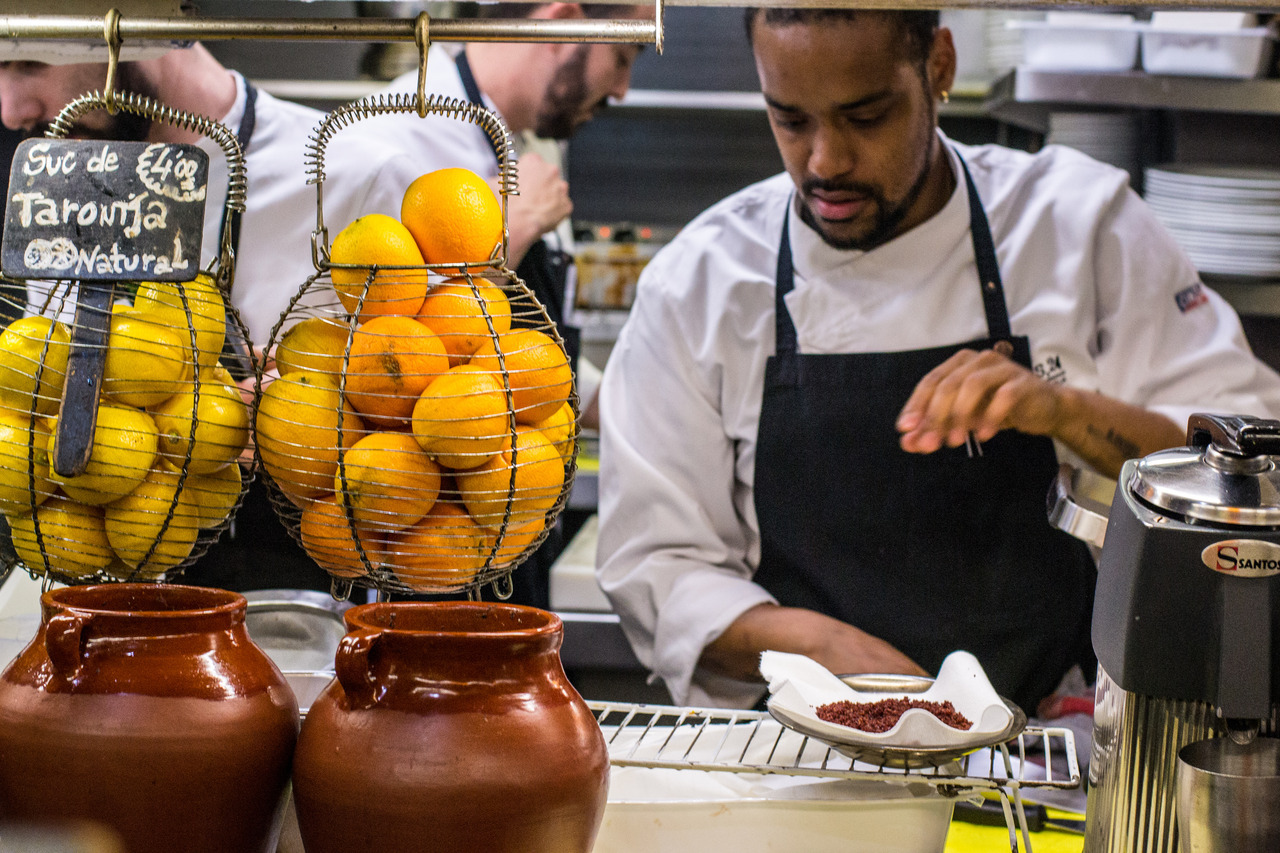 Tapas 24
Like Dos Pebrots, Tapas 24 comes from a chef who worked at Ferran Adria’s El Bulli, but the food here is less modernist than it is an elevated version of Spanish classics. I’ve written about Carles Albellan’s famous bikini of truffles, jamon iberico, and mozzarella di bufula before, but something I wasn’t expecting to love (and fully did) was how they handle eggs. The last time we went we were there in time for their breakfast service, and it might have been one of my favorite meals from that part of the trip. The eggs are made estrellats, in which the eggs are fried and then tossed with fries to break them up and make the egg yolk run all over. Served with a beautifully-cooked slice of foie gras on top, it was one of the most perfect dishes I had during a week of a lot of perfect dishes. The added bonus of hitting up Tapas 24 for breakfast/brunch? The crowds are much thinner, making it far easier to get a perch that gives you a peek into the kitchen as the chefs are working on getting set up for the day. 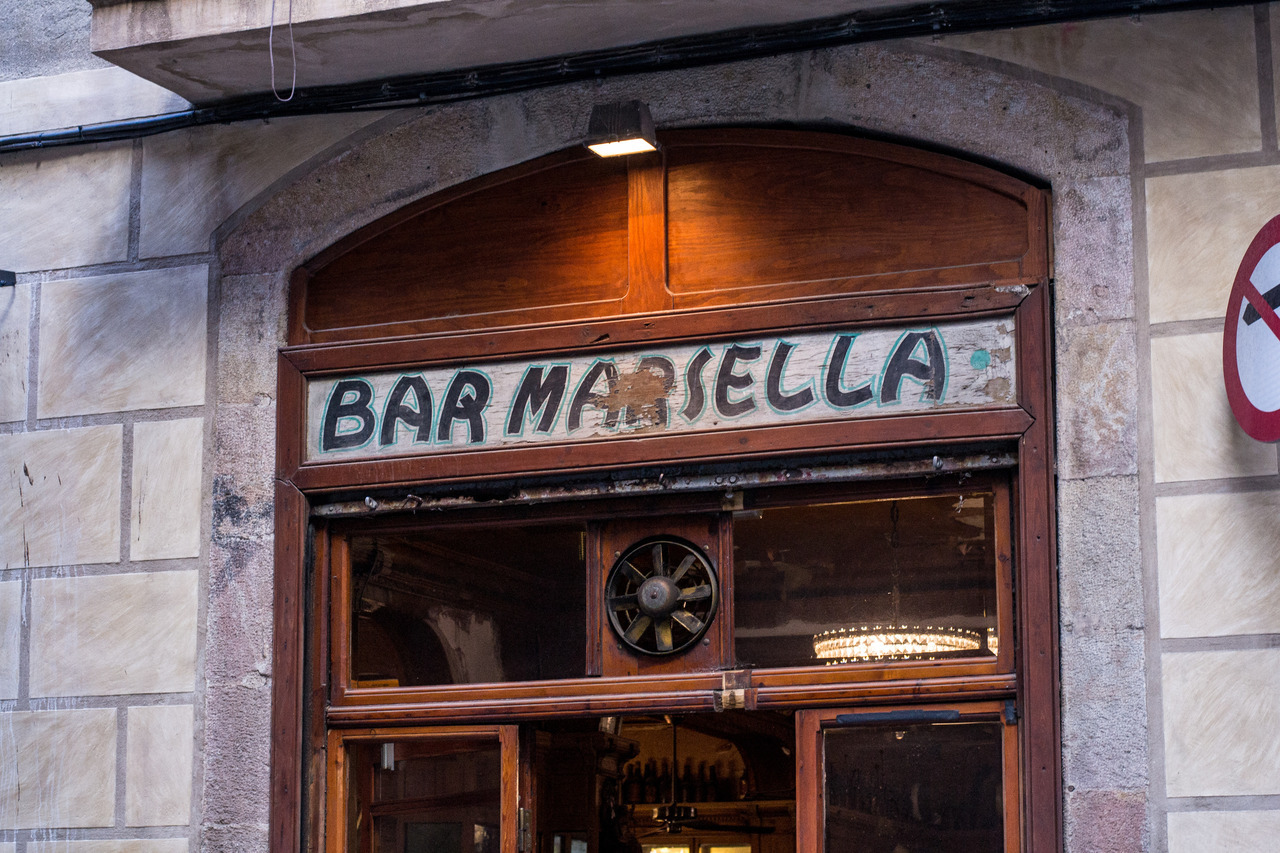 Bar Marsella
This isn’t so much a place to eat as a place to drink, as I’ve written about previously. But the drinks here are delicious and reasonably priced, and the place is steeped in history—it’s one of the oldest bars in the city, and luminaries from Picasso to Hemingway to Scarlett Johansson have darkened its doors and drank its signature absinthe cocktail. If he realizes that you’re going to linger for a while, the proprietor will place a bowl of potato chips on your table to keep you lingering longer. Combine all of that with a space that is super-old and historic, and it’s absolutely marvelous. The next time I come here, I might want to bring my laptop in order to write, because it’s the perfect place to do so.

Café Elisabets
I found this place from a random article, and the first time I tried to go here it was closed. So on our most recent trip we went here for lunch, and it was a wonderful, low-key place to get solid classic dishes. It’s notable that this place is the least-pretentious yet best-reviewed of the places in its vicinity, and I would highly recommend the croquetas. 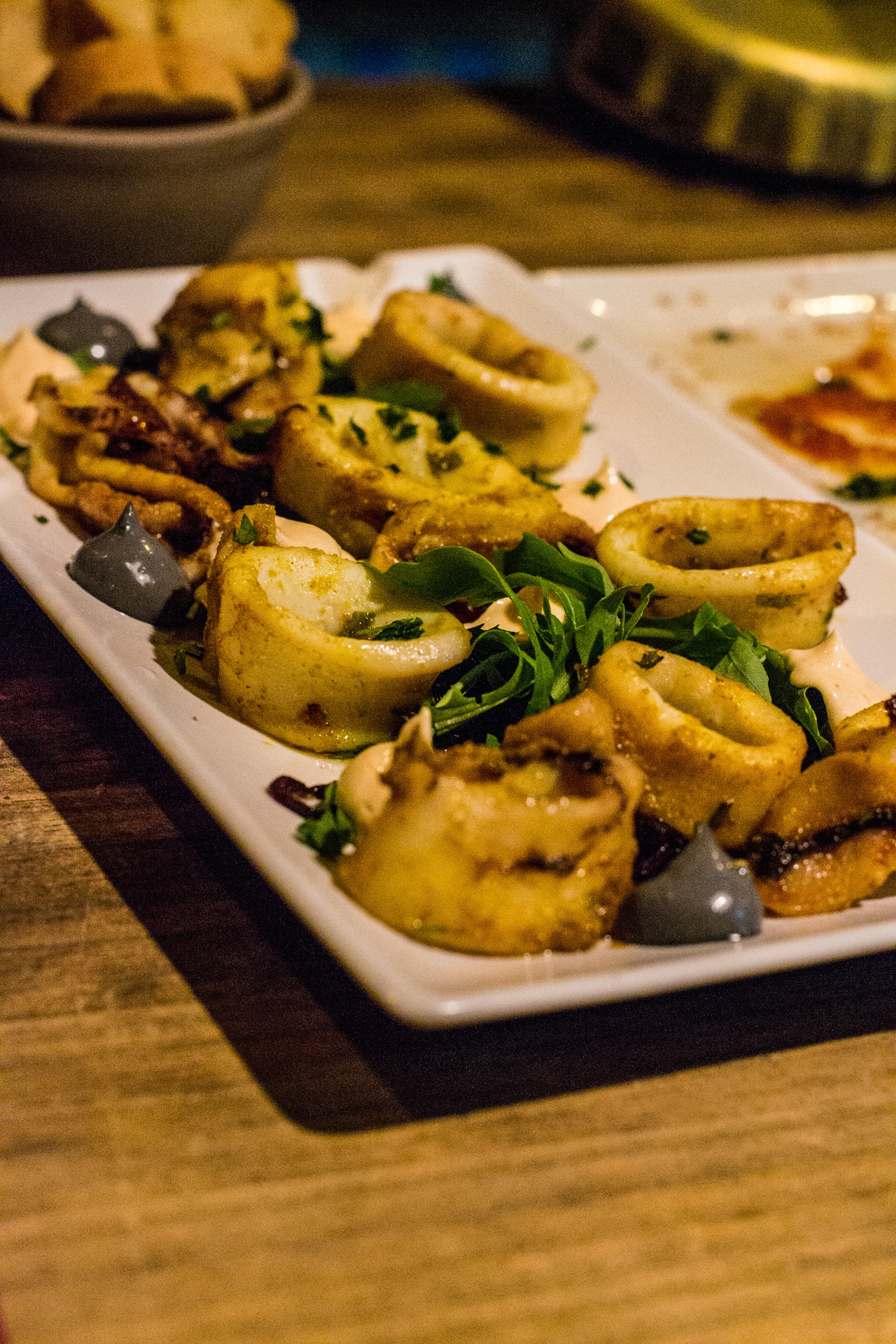 Alcoba Azul
Another spotI wrote about on the blog, we found this place by total accident—we were in the Barri Gotic and the one place I had in the vicinity didn’t look inviting; instead, Michael peeked into this place down the street and thought it would be a great place. Not only were the cocktails here amazing, but the food was simple and thoughtful and really well-executed. We ended up coming here during a horrible rainstorm on our last full day in the city, and it was such a lovely interlude. It’s a quiet, low-key spot that has a killer cocktail menu and super-nice bartenders, so if you end up here just put your culinary future in your bartender’s hands and you will be satisfied. 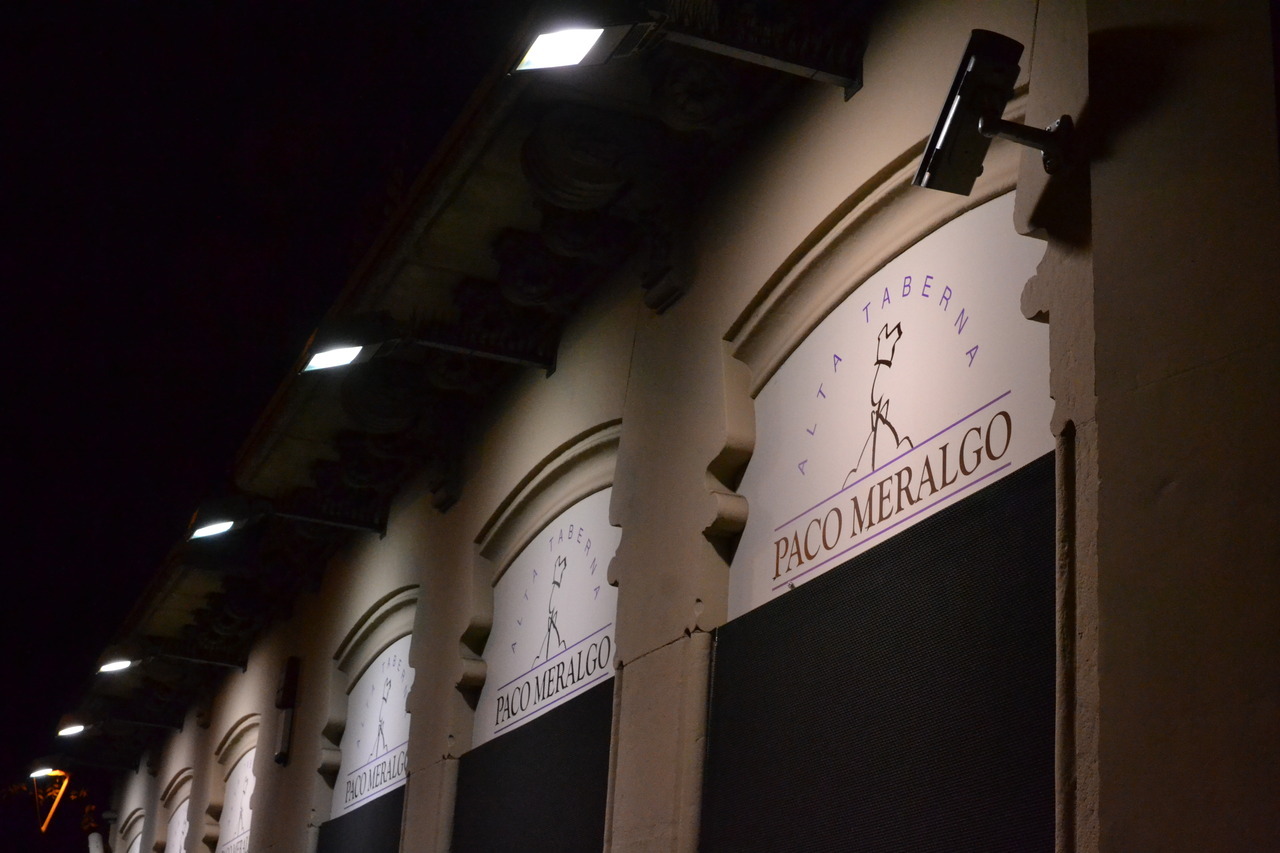 Paco Meralgo
This is a place that comes recommended by the folks at Barcelona Wine Bar, and it’s easy to see why—this is a cozy place, slightly off the beaten track in the L’Eixample neighborhood. While all of the tapas here are good, my personal favorite is the steak tartare, but the bomba—a huge, potato-filled meatball—is also really good, and I’m usually not a potato person. 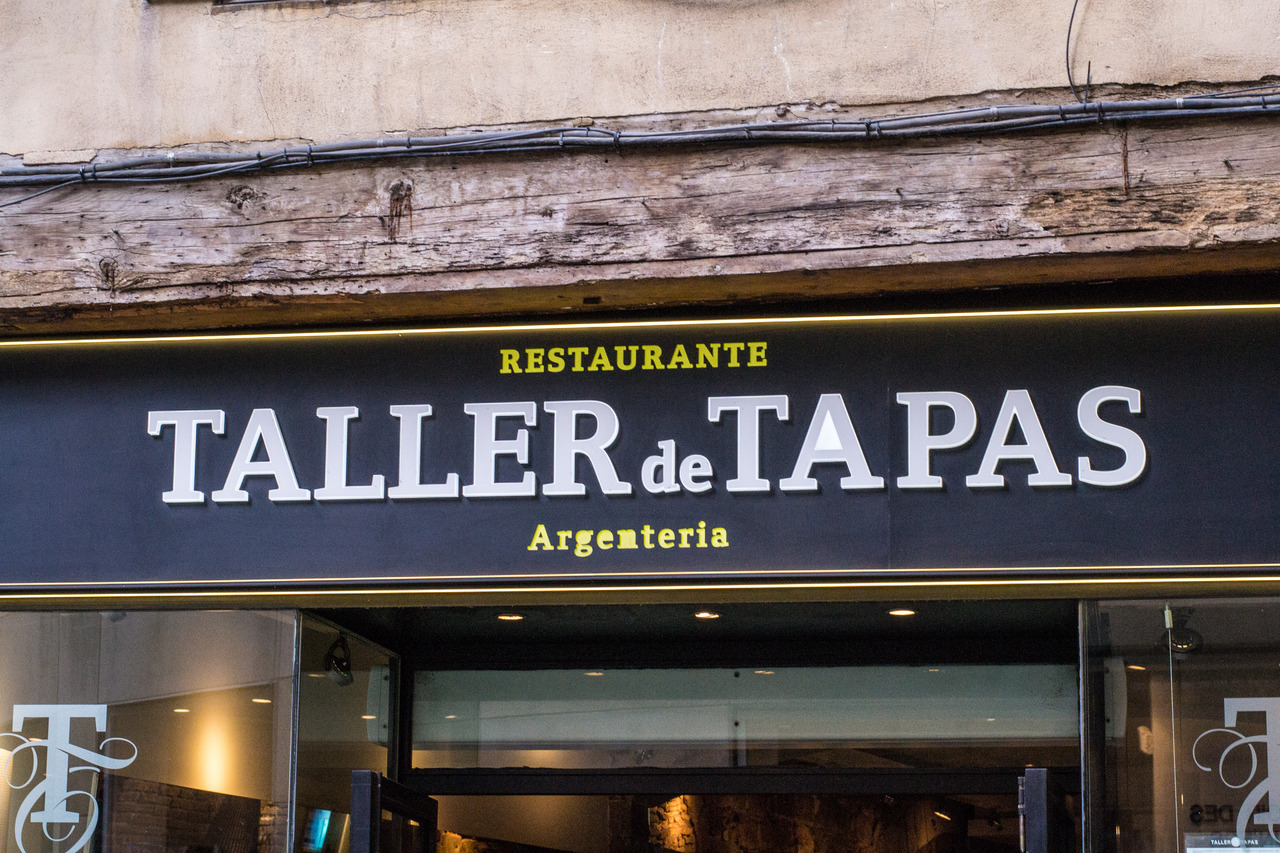 Taller de Tapas Argenteria
There are several Taller de Tapas locations in Barcelona, including one on Las Ramblas. (A scene from Vicky Cristina Barcelona was filmed there to boot.) The Argenteria location, in the Born neighborhood, is not quite as flashy, but it is a great option when you’re walking around in that part of town, looking for a bite to eat. The fried padrón peppers and the cuttlefish a la plancha are two still-memorable dishes we had here, but it should also be noted that the cocktails here are equally tasty. 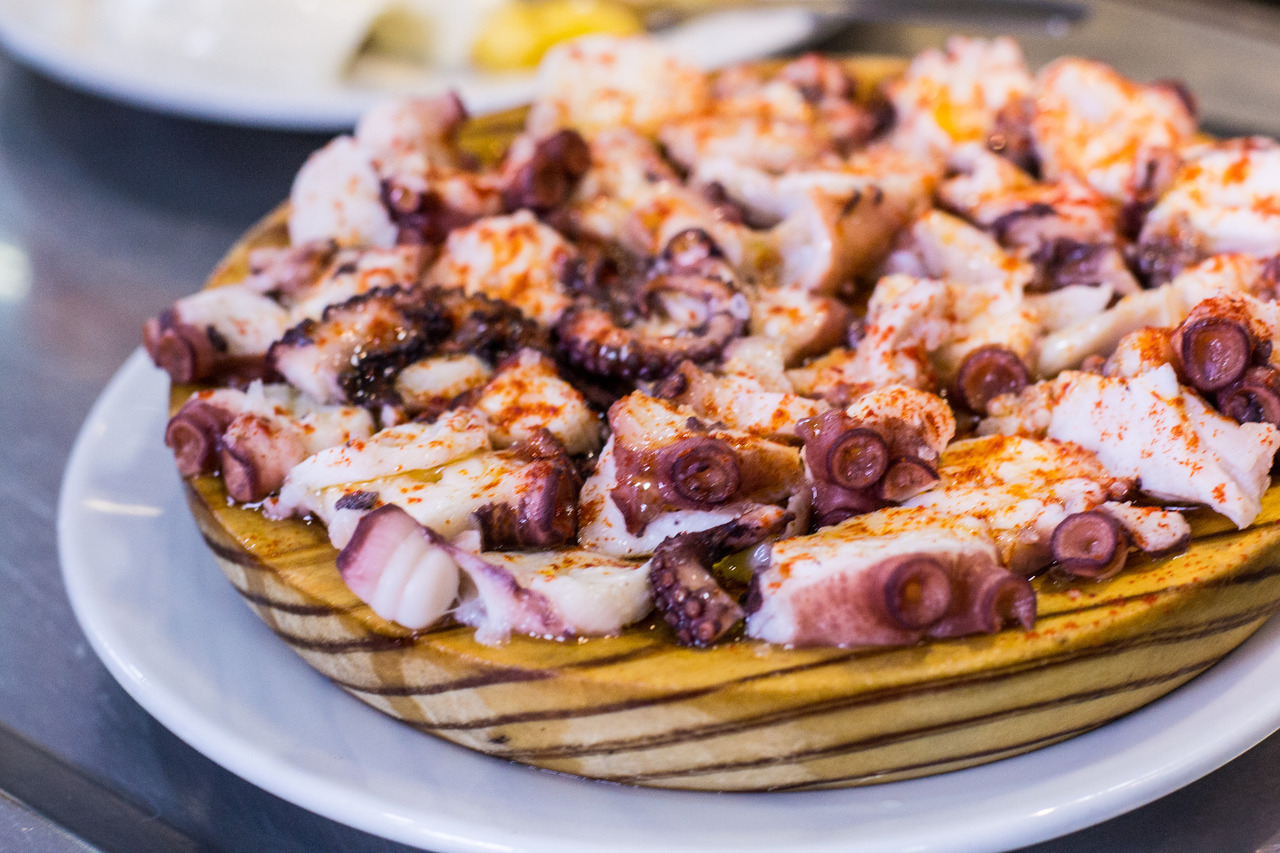 Bar Celta Pulpería
Also in the Born district, this is the place to come to if you’re a fan of octopus. That said, if you’re like me and you’re not a huge fan of octopus, there are plenty of other excellent dishes, like the calamari alla romana that I wrote about here as well as a whole host of other tapas. 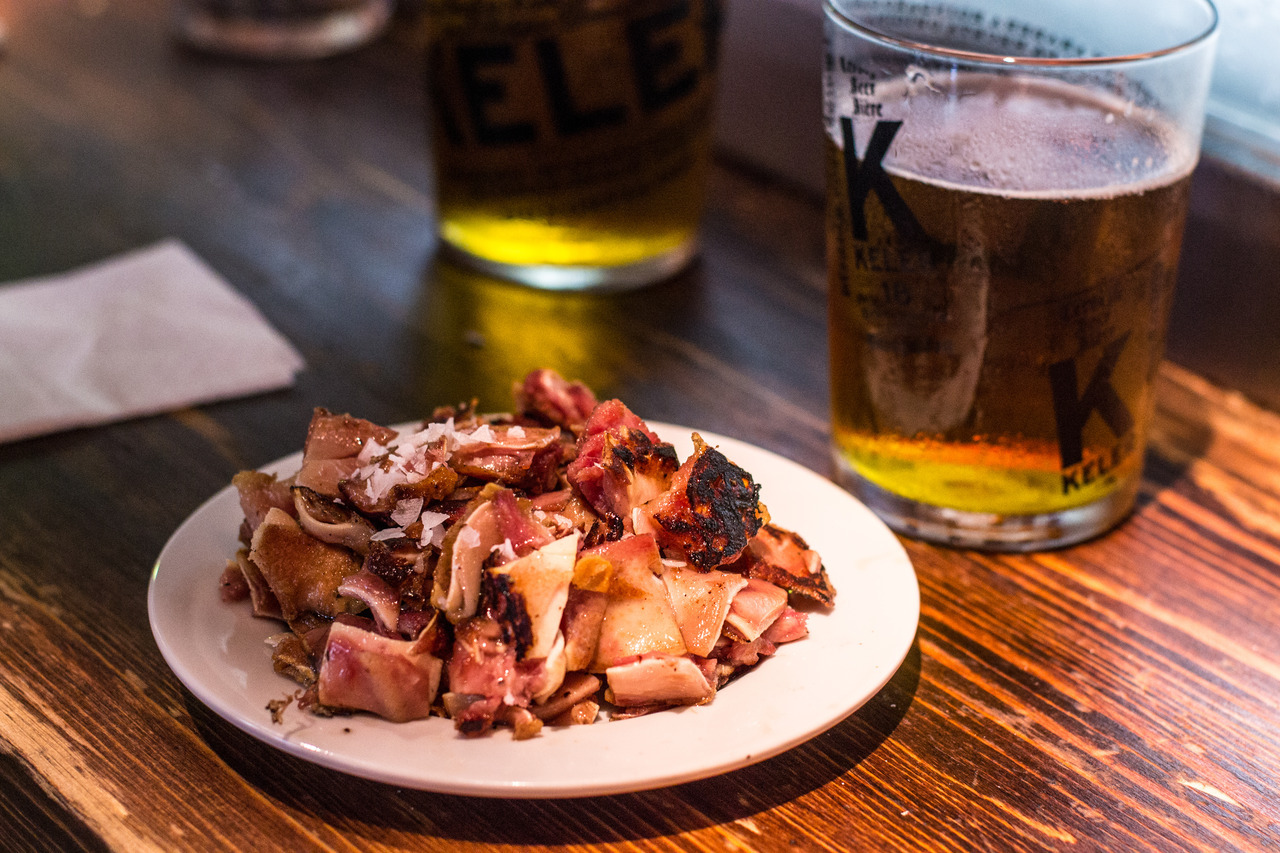 Bar Perikete
There’s this one bar in the Barceloneta neighborhood that I have been dying to go to, but the first time we tried it was super-busy, and on our most recent attempt, the place was closed on account of it being Diada de Catalunya. The upside to our not being able to go to this place means that we end up trying out some other places in the area, and Bar Perikete became our latest discovery. While it was bustling when we got there we eventually got ourselves seats at the bar, cañons of beer, and a plate of orejas a la plancha to nibble on. For what turned out to be a pretty hot day it was exactly what we needed, and any looming hangriness was put to rest fairly quickly.

Bar Central
The first time we went to La Boqueria, we didn’t appreciate how much of a tourist destination it would be, and so we went hungry and unwilling to wait for a stool at Bar Pinotxo or similar. Instead, we found two stools here and had a really solid meal that included some delicious gambas al ajillo. If you can’t get a stool at Bar Pinotxo, this is an excellent alternative.