[Ed. – To my friends in the US, please vote today if you haven’t already.]

The sheer number of Spanish and Catalan cookbooks in my collection is proof enough that one of the things I love to do most after visiting a place I love is to try to recreate as many of the dishes that I had there. This isn’t always successful because some ingredients are simply too difficult to track down in an efficient way (especially since we no longer live in New York and have the wonderful Despaña a subway ride or two away), but even with that, I’m usually able to make it work. (This is primarily due to being able to order stuff via Amazon.)

What I’ve encountered in my still-limited experience in trying to understand Basque cooking is that because it’s so ingredient-driven that I’m worried that I’m not going to be able to get the right ones to make it truly authentic, so why should I bother in making it, much less write about it? 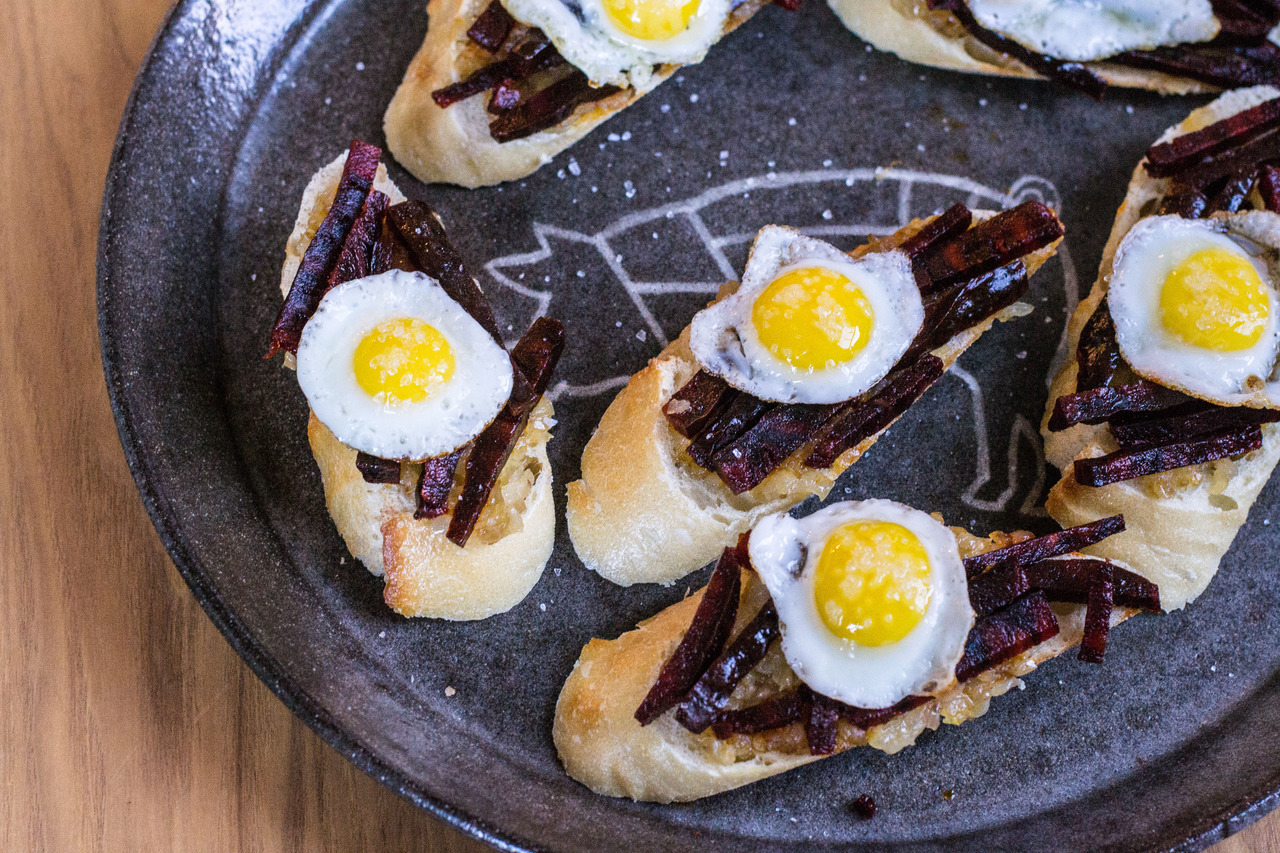 The Basque Book comes from Alex Raij, a Chicago-born chef (to Argentinian parents) who married a Basque man and unsurprisingly fell in love with the food of her husband’s home. Together they’ve gone on to create several popular New York Spanish restaurants, from El Quinto Pino to La Vara and more recently, Txikito. I’ve been to El Quinto Pino a few times now—they inspired a particularly delicious cocktail that we’ve made again and again and before that, it was where I learned how to love both pig ears and uni—and now Txikito is on my list of places to visit on my next visit to the city. This book is the result of all of the work she put into Txikito, the first in her mini-empire to focus on Basque cuisine specifically. What I find so delightful about it is that it’s basically a how-to on making Basque food when you have the misfortune of not being in Basque Country.

This montadito—otherwise known as a small, open-face sandwich—is the first I’ve made from the cookbook and it already is a favorite. I love putting fried quail eggs on basically anything, and the combination of that, the chorizo, and the lightly caramelized onion on non-toasted bread are quite addictive, and we basically destroyed a platter of them while we worked on the rest of dinner that night.

The only tricky thing about this recipe is that opening quail eggs can be a bit fraught; you can’t really crack them like regular eggs, because the size of the eggs does not lend itself well to cracking and it’s all too easy to break the yolk when trying to pour the eggs into the pan that way. We realized that taking some kitchen shears to the shell works wonderfully: holding the egg upright, snipping the top third of the shell off makes it easy enough to pour the egg into a non-stick pan and fry it all without having to worry about the yolk breaking. When I sat down to write about this I did some searching and realized that there are scissors specifically suited for this task, but as someone who owns enough unitaskers with regard to my pasta-making, I don’t need to add yet another silly tool to our drawer when a real tool works just as well.

Figuring out that rhythm is worth it, because the final product is salty, sweet, and creamy thanks to the egg, onion, and chorizo; that the bread is soft means that it’s essentially both a sponge to hold all of those delicious flavors and a vessel to make it easier to transport into the mouth. This is a dish I would save for when I really want to impress my guests during a dinner party, because who could not be charmed by a teeny fried egg? 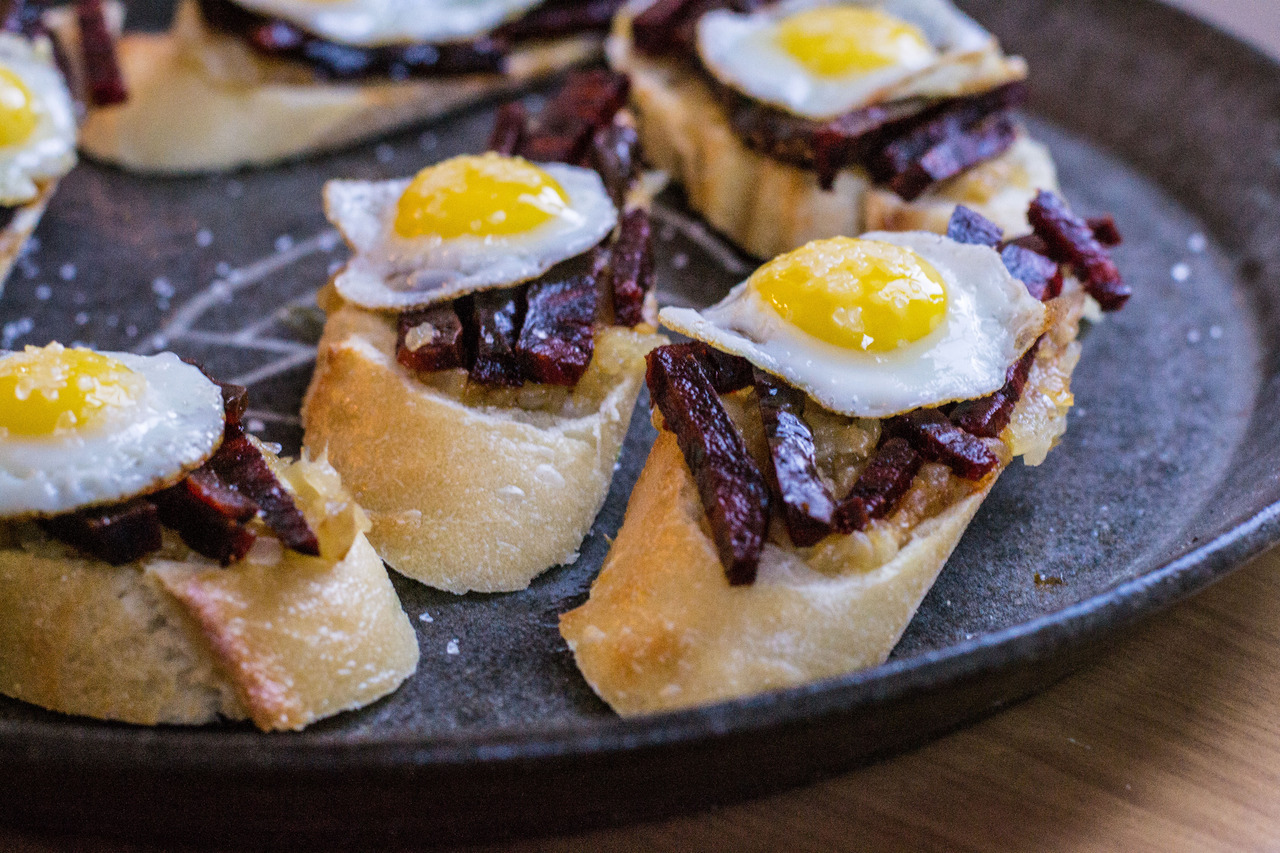 Adapted from The Basque Book by Alex Raij

Prepare the chorizo: Cut the chorizo tips off, and then cut it in half at the U bend to create two logs. Using a paring knife, carefully create a shallow incision in the chorizo so you can then peel off the casing. Cut each log lengthwise into slices and then cut them into matchsticks. Make sure you have a very sharp knife to do this, because it is tiring, and also have a drink waiting for you when this is done. Set the matchsticks of chorizo aside.

Dice the onion very finely, and then heat the olive oil over medium-low heat and cook it low and slow with the pinch of salt for about 25 minutes, only until it starts to get lightly brown rather than fully caramelized. You just want it very soft and sweet.

To assemble the sandwiches: On each slice of bread, place a tablespoon of the onion mixture followed by a hefty pinch of the chorizo. Using a small non-stick pan, heat over medium-low heat, and carefully snip the quail eggs about a third down to create an opening for the egg to fall through; pour into the pan and cook until the whites are set, about 2-3 minutes. Carefully remove using a spatula and top on a sandwich, and finish with coarse kosher salt. Repeat for remaining sandwiches and serve immediately on a platter.