Back in 2017 when I was in the midst of cooking through my cookbook shelves, one of the more intimidating titles I took on was the Le Bernadin cookbook. Of the two books by Ripert I have, this one is by far the fanciest; Avec Eric is a little more down-to-earth because it goes beyond fish and seafood and seems to be more reflective of all of the food he likes to eat. The one dish I could say that I’ve made out of Le Bernadin: Four-Star Simplicity as the smoked salmon dip, but since that also is found in Avec Eric I felt that it didn’t count and I’d have to find something else to make. And so I flagged a few recipes that seemed doable, with the one I settled on being a dish of flash-grilled squid with sweet peppers.

The original dish has you confit the sweet peppers in olive oil with shallot, garlic, cayenne pepper, salt, and thyme, with the idea that you let it sit overnight before serving. I understood the thinking—confits generally do better when they are allowed to sit than serving them straight away—but I didn’t have that luxury of time so I decided to go a slightly different route. Instead, I ended up roasting the sweet peppers and essentially poaching the shallots and garlic in a hefty amount of olive oil, and then combining them all into a container and pureeing them into a smooth sauce. While not as fancy as Ripert’s dish, it still looks pretty damn good, and would be a lovely first course for any dinner party (so long as you know your guests enjoy squid) because you can really nestle the pieces of squid into the sauce and get the perfect bite every time.

The peppers I use are the little baby sweet peppers that seem to be eternally available at my grocery store. They are kind of a pain in the ass to peel following roasting, only because there isn’t as much flesh as compared to a full-sized pepper and therefore it’s a more delicate process. But the blackening adds such a nice, smoky taste to the sauce, and if you do make it during this time of year, you can almost pretend that you’re sitting at a Catalonian seaside xiringuita, enjoying this with a nice glass of Albariño.

Sigh. I really wish I was enjoying this dish at a Catalonian seaside xiringuita with a glass of Albariño.

The squid itself cooks really, really quickly, so it’s best to have everything you need within easy reach before you start heating up the pan. Said pan needs to be pretty damn before the squid goes in, and in addition to having the parsley, garlic, and lemon juice handy you should also have a way to get the squid out of the pan and a place for it to land so that way you’ve limited the chance that the squid could possibly overcook.

The other thing to keep in mind is that you want your squid to be as dry as possible. The squid we buy at the Teet is 95% of the time frozen, so to avoid flooding your pan with lots of milky-white water, give the squid time to defrost properly and then pat them dry as best as you can on paper towels. You might even want to pat the rings dry once more before putting them in the pan to sop up any last liquid.

If you’re feeling like you need a little pick-me-up from the dreariness of January, definitely consider making this, whether for a crowd or just for yourself. 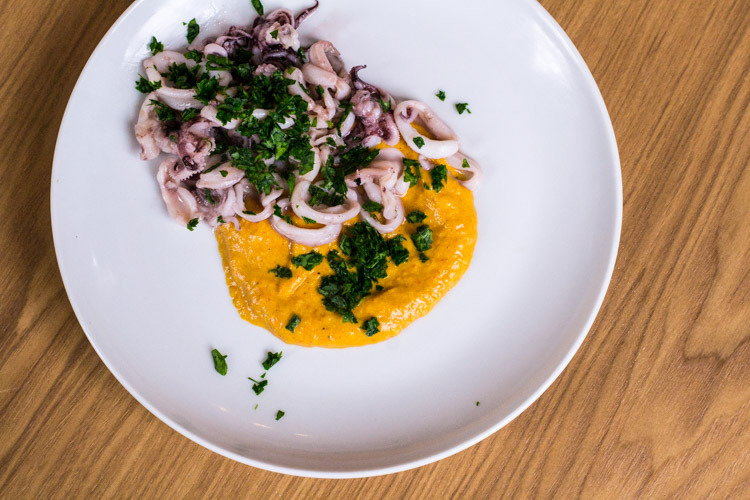 Serves 2 as an appetizer

For the pepper sauce:

To make the sauce: turn on your broiler. Line a baking sheet with foil, and gently drizzle olive oil over the peppers and place on the sheet. Broil, turning the peppers every 3 minutes or so, until the pepper skins are mostly black all around. Remove to a small bowl and cover to build steam. When cool enough to handle, stem the peppers and peel the skins off.

To make the squid: season the squid well with salt and pepper. Heat the tablespoon of olive oil over high heat until just smoking, and add the squid and cook for about a minute and a half. Add the garlic, half of the parsley, and the lemon juice to the pan and cook the squid for another 90 seconds. Evacuate the shrimp to a plate.

To plate: place about a quarter-cup of the sauce in the middle of the plate, and place a serving of the squid over the sauce. Sprinkle with parsley, repeat with the remaining plates, and serve immediately.