I know I’ve been writing a lot about Michael Solomonov and Zahav and Israeli Soul recently, but I can’t help myself because the restaurant and both cookbooks are really that good. A few weeks ago, Helen Rosner published a list of what she feels are the best cookbooks of the new century up until this point, and while there are some titles that I’m going to add to my list of books to check out of my local library before I add them to my collection, I found myself nodding enthusiastically at her rationale for including Zahav:

This book isn’t responsible for the new trendiness of Middle Eastern food—that honor belongs, arguably, to the collected works of Yotam Ottolenghi, and his artful deployment of pomegranate seeds and tahini. But, in my mind, Ottolenghi’s books make better sources of inspiration than instruction or learning. For the latter, there’s Michael Solomonov. 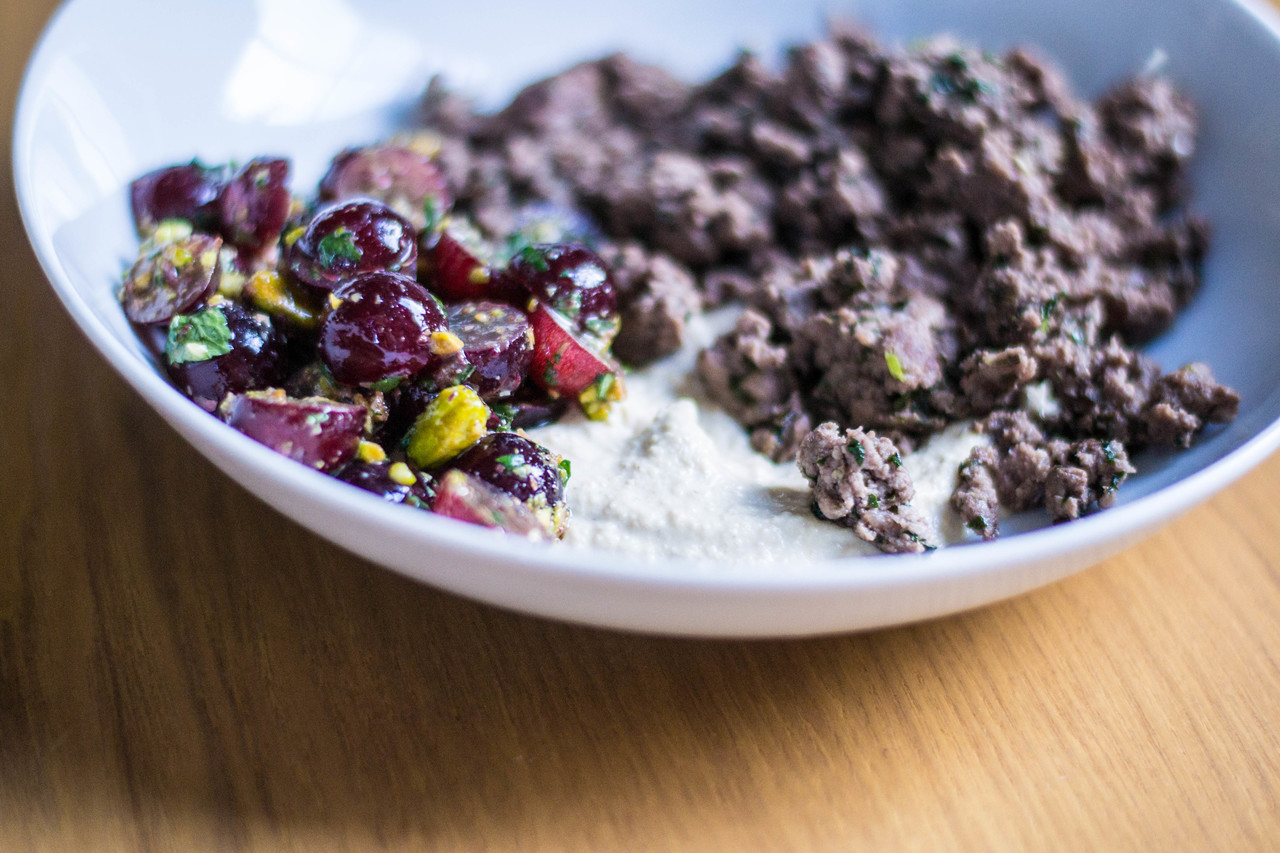 As the owner and user of several of Ottolenghi’s as well as Solomonov’s books, her comparison of the two chefs’ approaches is spot-on. Ottolenghi’s books (at least Jerusalem  and Plenty) are gorgeous, and while the recipes are solid and context is provided, it doesn’t go nearly as in-depth as Solomonov does in his books. That’s not to say that every recipe from Solomonov is a detailed treatise; in Israeli Soul, especially, he has a tendency to play it a little fast and loose with some recipes, almost in encouragement for you, the home cook, to go with what tastes good to you rather than following a strict protocol.

I also really like that he allows for some reasonable shortcuts, like using canned chickpeas rather than cooking dried ones when making hummus. I’ve done the latter and it yields a gloriously creamy result, but sometimes you don’t have the time or the inclination to soak beans overnight and then tend to them for an hour or so until they get to the appropriate level of doneness. Canned beans won’t give you quite the same texture, but if you want something that’s tasty and relatively easy to whip up on a weeknight, you could hardly do worse.

I did just this a few weeks ago after we spent a Sunday afternoon out and about; wanting something easy and, predictably, that didn’t require a lot of cooking, I took some inspiration from Ottolenghi’s hummus kawarma and Solomonov’s suggestions for various hummus toppings and cobbled together my own little combination. I am currently the proud owner of a big bottle of baharat seasoning–a blend of allspice, coriander, black pepper, cardamom, cloves, and nutmeg–and so naturally I am looking for ways to use it before it goes stale. Realizing that there were a lot of overlapping flavors between what’s in baharat and the spices used in Ottolenghi’s kawarma recipe, I saw an opportunity to make the marinade recipe a little faster by simply using the baharat along with some minced parsley, mint, and salt to combine with the ground lamb.

Instead of adding a lemon-herb sauce to top it all off, I opted instead to try Solomonov’s grape and pistachio salad. Originally prescribed to go with a roasted butternut squash hummus topping in Israeli Soul, I thought it would work here to add some balance to the lamb. (This is an example of one of Solomonov’s fast-and-loose recipes, as it’s so casual that he doesn’t even call it out separately from the rest of the recipe.) It’s a nice tart complement to the rest of the dish along with adding some crunch, and when you get a spoonful of the hummus, lamb, and salad together it makes for a really satisfying bite.

I definitely want to play around with this recipe, but as-is, it’s a wonderful one to add into your rotation as the summer draws to a close. 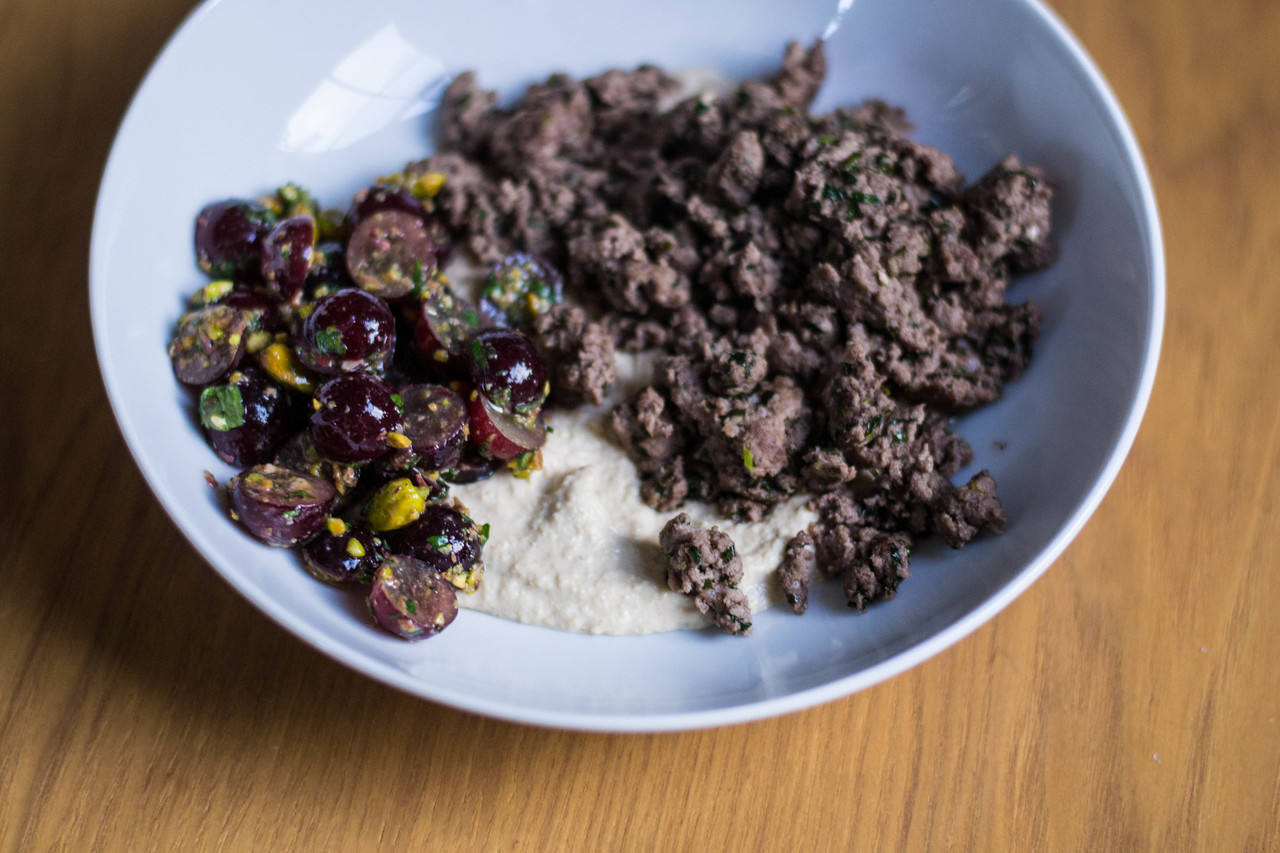 Adapted from Zahav and Israeli Soul

Serves 4 as an entree

Marinate the lamb: combine the lamb, baharat, minced parsley and mint, and about a teaspoon of kosher salt into a bowl and mix well. Chill for 30 minutes while you make the rest of the components.

Make the grape-pistachio salad: in a medium bowl, combine the grapes, pistachios, lemon juice, kosher salt, chopped herbs, and a drizzle of olive oil; mix well and set aside.

Make the hummus: in a blender carafe, combine the garbanzo beans and tehina sauce and blend on medium until very smooth. Add in the kosher salt and cumin and blend again, and add a little more salt or cumin if desired.

Assemble the dish: in a large, 12-inch skillet, heat the tablespoon each of olive oil and butter over medium-high heat; when butter is melted, add the lamb and cook quickly until the meat is no longer pink, about 3-5 minutes. Remove from heat. In soup/salad bowls, spoon some hummus into each, and then top with the lamb and some of the grape salad and serve immediately.