There’s a lot to like about The Deacon, the AirBnB/event space we stayed at for D & E’s wedding, but one of my favorite touches was the small collection of cookbooks they kept in the kitchen. There’s a mix of indie publishers including Cherry Bombe and Lucky Peach (RIP), but I also smiled at seeing the inclusion of the Zahav cookbook. The restaurant–recently named the best in the country by the James Beard Foundation–clearly serves as a point of civic pride for Philadelphia, if only by the sheer number of my Philly-area friends who recommended it to me last summer when I sought suggestions for places to go on Facebook. I’ve sung the praises of the restaurant and its companion cookbook in this space before, albeit not as fervently as I should given how often we’ve turned to it for recipes over the course of this summer. I’m going to try to begin rectifying that now. 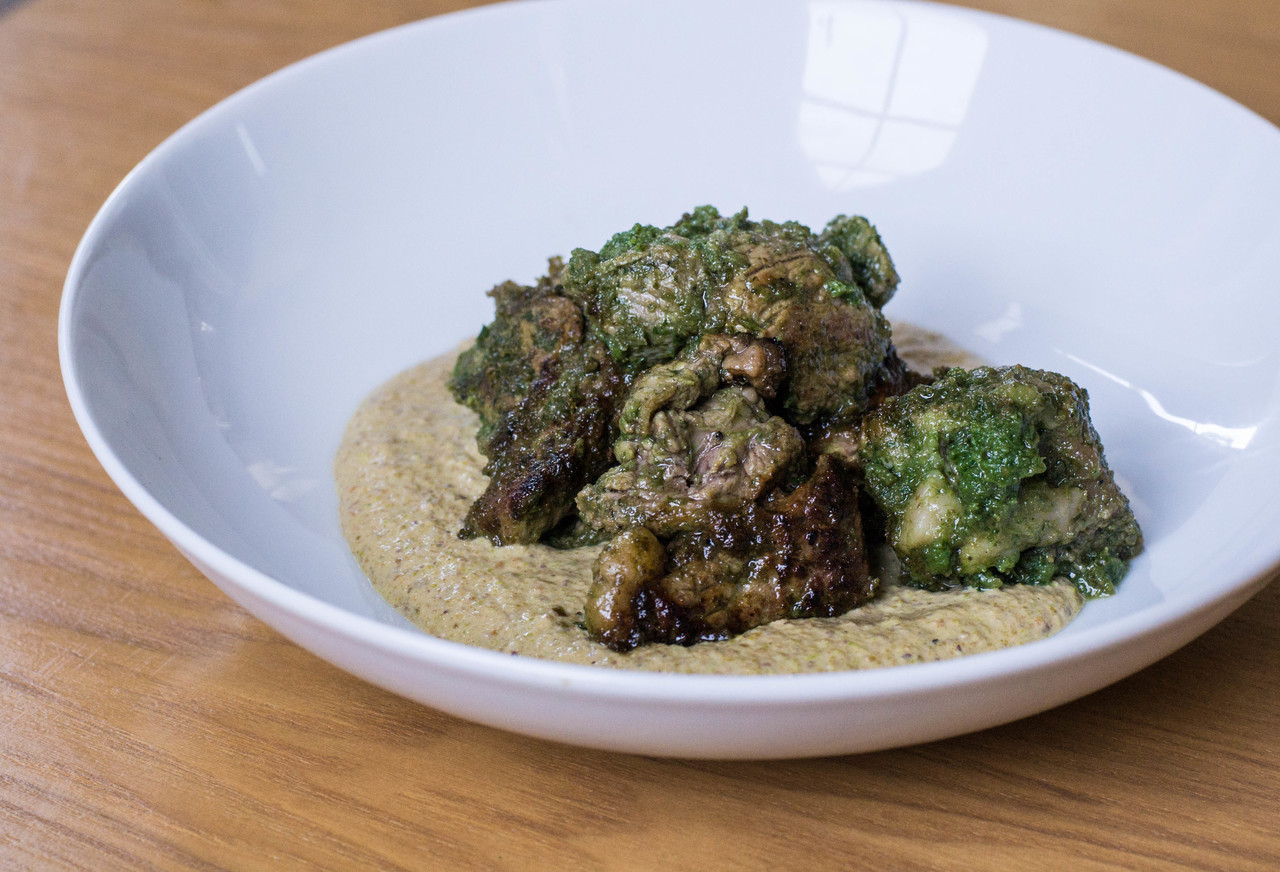 I actually settled on making this recipe the Saturday after the wedding while flipping through The Decon’s copy of the cookbook. After all of the food prep and cooking we’d done that week for the wedding festivities, I had given exactly zero thought as to what we’d make once all of that was over and so I was scrambling a bit. When I turned to the lamb shishlik, I was struck by how damn hungry it made me; showing it to Michael, he agreed and said that he thought that butterflied leg of lamb was on sale so that would be a great way to use it. You’d think that after all of the pistachios we shelled for the pesto that the idea of going through that again to make the sauce was ridiculous, but no–I was down to shell a few more, after all.

One thing I really, really love about Zahav is that it makes great use of pretty standard ingredients and puts them together in a way that you may not expect but work really well together. Michael Solomonov doesn’t shirk away from using and highlighting specialty ingredients, of course, but it’s possible to make a good number of the dishes in this book with ingredients found in a standard grocery store. The shishlik marinade so straightforward, and yet so tasty: a blend of mint, cilantro, parsley, onion, cinnamon, lemon zest, garlic, and black pepper along with some canola oil. You can’t get much simpler than that!

The tehina sauce is also really easy to make. The base is a simple combination of garlic, lemon juice, and tehina paste (which you may know by its Greek name tahini), though what’s interesting is that instead of putting garlic directly in the sauce, a whole head of it is blitzed with some lemon juice and then strained before being combined with the tehina. Solomonov uses this as his base for Zahav’s famous hummus as well as a number of sauces throughout the book, and when combined with pistachios, makes a creamy, nutty accompaniment that pairs nicely with the herby lamb.

The lamb itself is probably the spendiest item that you need to get here, so try to plan it when you find some at a great deal. Solomonov calls for lamb loin–a cut usually not available at the grocery store, admittedly–but Michael was right in that leg of lamb makes a perfectly acceptable substitute. Make sure you have at least four hours to let the marinade work into the lamb, and you’ll have a dinner dish that is perfect on a hot summer evening. 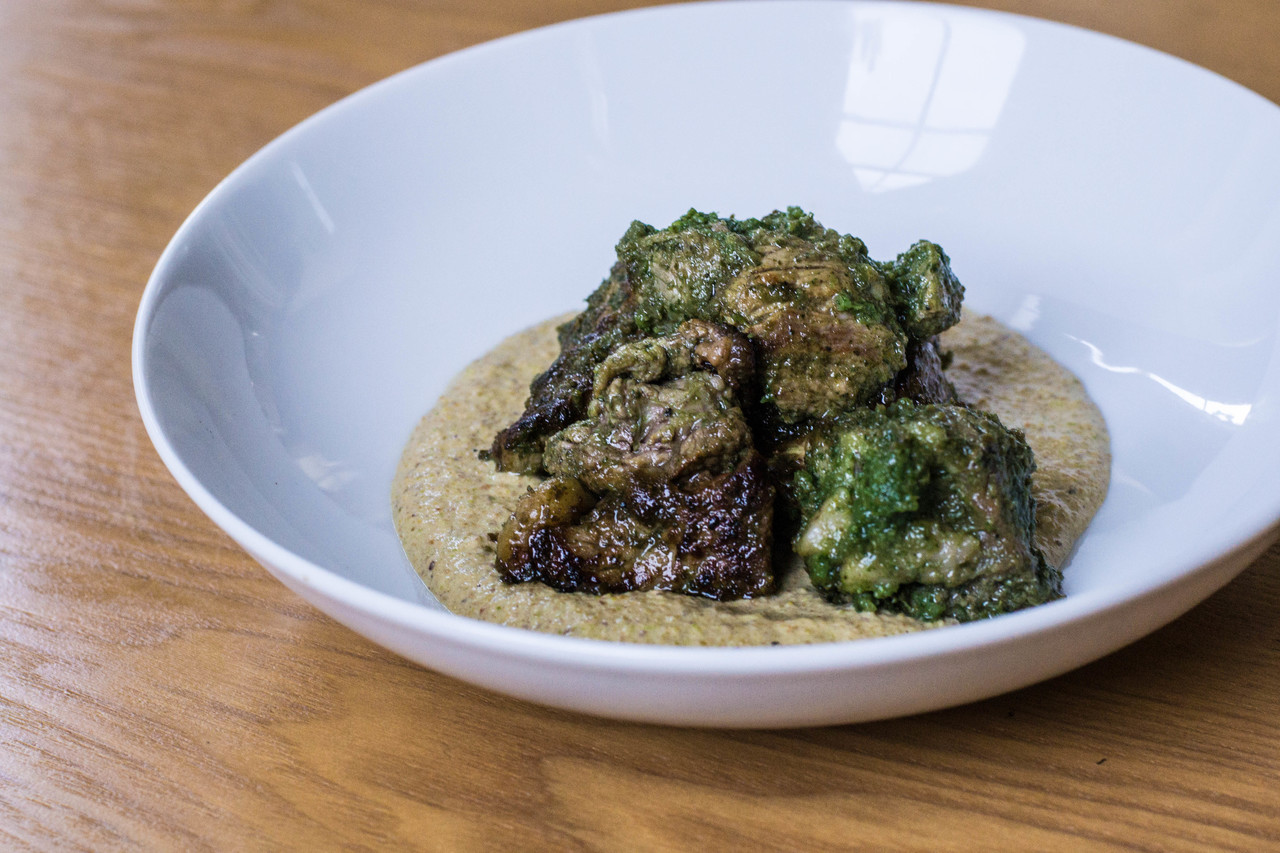 Slightly adapted from Zahav: A World of Israeli Cooking

Separate the garlic cloves but do not peel them and add them to a blender carafe along with the lemon juice and ½ teaspoon of the kosher salt. Blend on high for a few seconds until a thick puree forms, and then let the garlic and lemon juice sit undisturbed for at least 10 minutes. Strain the puree into a medium-sized bowl, pressing on the solids to extract as much liquid as possible, and then discard the solids. Add in the tehina, whisking until it’s very smooth, and then season with additional salt and the cumin if desired. If storing the tehina sauce, whisk in some cold water to loosen it prior to refrigerating it.

Make the lamb: Place the onions, herbs, garlic, canola oil, salt, lemon zest, pepper, and cinnamon into a blender carafe or food processor and process until smooth, adding a few tablespoons of water if needed. The consistency desired is that of a thick milkshake. Combine the marinade with the lamb into a zip-top bag or vacuum-sealed box and let sit for at least four hours, up to two days.

When ready to cook the lamb, prepare a grill or heat a cast-iron skillet over medium-high heat. Wipe the excess marinade off of the lamb pieces and thread onto skewers before cooking them over the coals or the cast iron pan, turning every few minutes until the lamb is cooked through and there is a char on the outside. This should take about 8 minutes. Let rest.

Make the pistachio tehina: First, you take the pistachios and add them to a small saucepan; add just enough water to cover. Bring to a simmer, and let them cook until the water has boiled off and the pistachios are soft, about 20 minutes. Combine them and the tehina sauce into a blender or food processor and blitz until very smooth.

To serve: Spoon some of the sauce onto each plate, and then top with the lamb skewers. Serve with a salad of choice.